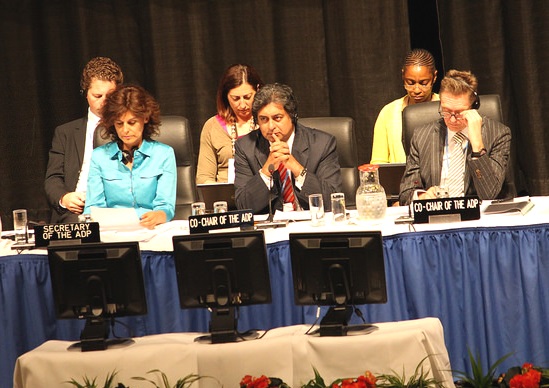 The UN Climate Talks got underway in Bonn Wednesday with negotiations re-opening on the design of the 2015 agreement and finding ways to raise the current level of global ambition to address climate change in the near-term. Meetings and negotiations around the UNFCCC’s ongoing work in its subsidiary, and a series of workshops, high-level meetings and special events also kicked off today.

Among the latter, representatives from the Intergovernmental Panel on Climate Change briefed governments on the most recent climate science. And nearly all of the governments who spoke in the day’s final and highest profile session referenced the calls for urgency enshrined in that science.

While recent announcements by the US and China sparked optimism about deadlocks between developed and developing countries giving way to climate action, negotiators didn’t show it. Instead they wore tired expressions; perhaps a tacit acknowledgement of the weight and importance of their work in the coming days.

Regardless, many of our partners are also in Bonn, they’re energized, and they’re ready to push governments as far as necessary in order to make the most of these precious few negotiating days before September’s UN Climate Leaders Summit in New York and the COP in Peru.

Two days of special Ministerial meetings starting Thursday – one for countries with existing commitments under the Kyoto Protocol, and one for all countries to discuss pre-2020 ambition – will provide opportunities for ministers to spend time building the relationships and partnerships vital to driving greater ambition.

With just 43 Ministerial representatives attending out of a possible 196, however, the opportunity to make a major step forward on the road toward a 2015 deal won’t be fully utilized. Ministers from China, the US, France and the EU are all billed to attend, but representatives from some of the world’s largest carbon polluters – such as the UK, Russia, Australia, Brazil, India and South Africa – are apparently ignoring the importance of the moment.

The team at Climate Action Tracker released a new study analysing the Global ambition levels, and it looks like the world’s still headed for a “3.7 to 4.8°C warming by 2100”. They also dove into the recent US emissions initiative, arguing that “while the proposal is welcome, it is insufficient to meet the US’s pledges of 17% reduction of all greenhouse gas emissions by 2020”.

While the US announcement on emissions cuts could have a catalytic effect on international climate politics, the Union of Concerned Scientists are reporting that the new regulation “underestimated the true potential for renewable energy.” UCS will be among a number of our US partners pushing to strengthen the proposed rule.

The EU looks set to try and steal some spotlight from the US, as RTCC reporter Sophie Yeo notes that it is on track to cut its total greenhouse gas emissions “24.5% by 2020 compared to 1990 levels.”

Our Greenpeace partners protesting in the lead up to the G7 meeting certainly think the EU, as well as the other G7 countries could make significant cuts if they put more support behind renewables.

Li Shuo from Greenpeace East Asia digs into China’s coal control measures affecting “44% of the country’s coal consumption.” He highlights that if an absolute CO2 cap came into place in the next 5 year plan, it could push China close to what the IEA says it needs to do to “limit global climate change to 2 degrees Celsius.”

ChristianAid made a call out today for funds to fill what they call an “open bank account” in the Green Climate Fund.

Li Shuo argues in the China Dialogue that if recent news is true, Chinese announcements this week could signal good news for an international agreement in the post-2020 Paris agreements.

Obama’s announcement couldn’t have come at a better time to shine the spotlight on struggling Australian Prime Minister Tony Abbott, who is due to meet Obama for the first time next week.