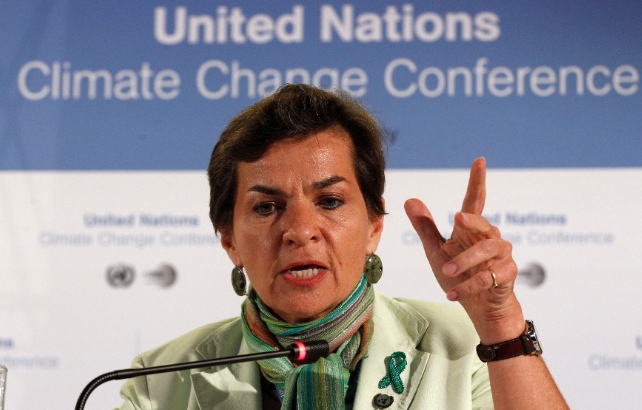 United Nations climate negotiations have resumed for a week-long session in Bonn, Germany, from 4 March to 10 March.

The lack of leadership from developed countries, and the backward moves by governments like Australia and Japan, led to an unprecedented walk out by civil society observers from the Warsaw Summit.

The conference in Bonn will be the first time governments meet again, although it is a smaller meeting and does not include the full breadth of the work of the UN Climate Convention.

The negotiations will be undertaken in two ‘workstreams’:

Key emerging questions from the talks will be:

For further information, interviews, briefings or quotes on these topics or others from a range of civil society representatives please contact: alex.rafalowicz@gmail.com (Bonn local number available shortly). Information and documents will also be tweeted at ClimateJustInfo.

“Storms destroy our homes, roads, bridges, and crops. Droughts push up the price of food. Temperatures ricochet from the hottest peeling hot days to dangerous unseasonable cold. Climate change is here already in Africa, and now the world must find an emergency response before it gets worse,” said Augustine Njamnshi, the Executive Secretary of BDCP, an NGO based in Cameroon, who will be attending the talks.

“The outcome of the last climate summit was so weak its impact on the climate was imperceptible. Observers marched out of the Summit in Warsaw calling for people’s demands to be listened to over polluters’ influence – the Bonn meeting should indicate governments have raised their sights.” Mithika Mwenda, General Secretary of the Pan African Climate Justice Alliance, a coalition of over 500 African groups headquarted in Kenya, said.

“This meeting in Bonn must right-the-course, by setting a clear way forward on scaling up pre-2020 climate action by raising developed countries’ pollution targets so they meet their fair share of the global effort. They must also set clear goals on climate financing. Getting pre-2020 action up to scratch has to be the number one priority of the talks.” Meena Raman, negotiations expert with Third World Network, a Malaysian based NGO and longtime observer of the talks said.

“For the first time the UN climate talks are hosting a more directed technical process – this could be a turning point to scaling up the transformation we need to confront climate change. The technical process is focusing on energy and so governments must seize the moment, listen to the huge amount of public support, and pick clean over dirty energy once and for all.” Asad Rehman, Head of International Climate at Friends of the Earth EWNI, based in London, said.

“This meeting in Bonn will set the shape for a longer-term agreement so it’s important rich nations don’t try and cut corners by ignoring central issues like the transfer of finance and technology to developing countries and preparing for climate impacts,” said Harjeet Singh, the Delhi-based, International Coordinator for Disaster Risk Reduction and Climate Adaptation at ActionAid International.

Actions & commitments in the pre-2020 period

The Bonn talks will open with developed countries ‘pledging’ effectively no climate action between now and 2020. This has been further undermined by the backtracking of Japan and Australia on their previously announced commitments.

The United States continues without a national climate change law and can offer no guarantee that it will meet its very limited target, nor a justification for that target given its historically large-share of climate pollution and the scale of action required to prevent run away climate change.

In contrast, developing countries are proposing to do more total abatement than developed countries by 2020 and have recently been recognized as leading the way in creating national legislation on climate change.

In this context the talks under Workstream Two (focused on pre-2020 action) take on great urgency; without increased action, very dangerous climate change could be locked-in before a future agreement is reached.

A priority for Workstream Two is to agree on a pathway to assess the gap between the targets, particularly the weak ones proposed by developed countries, and what is required to limit warming to 1.5C and then to scale them up to the necessary level.

One of the few advances made in Warsaw was the establishment of a ‘technical examination’ of opportunities to scale up climate action under Workstream 2.

The first undertaking of this new process will have a particular focus on renewable energy and energy efficiency.

A focused technical exchange, rather than a more aggregated political dialogue, is a new development for the process and has the potential to meaningfully impact on the level of international climate action.

Several experts, along with representatives of governments and civil society, will present on policy proposals that could be rolled out at an international level.

A proposal that has been advanced by many in civil society is a Globally Funded Renewable Energy Feed in Tariffs, which would ensure decentralized community controlled energy access for the almost 2 billion people without electricity – but without replicating the dangerous existing model of energy generation and distribution.

Similarly, many in civil society have been calling for a focus on bans of particular types of energy projects (e.g. coal), beginning with moratoriums on international institutions providing funding to them. Calls to address investment and subsidy schemes that support dirty energy are also being widely made and should be taken up by Workstream 2.

Focused technical examinations will carry over into other sectors such as agriculture later in the year, where talks should focus on promoting agroecology and resilience among small scale farmers.

The success of cooperative work in Workstream 2, in addition to changes in countries’ pollution and finance targets, is a necessary pre-requisite for an effective outcome in Workstream 1.

Drafting elements of the 2015 agreement

The longer term agreement in 2015, building on pre-2020 action and commitments, needs to be comprehensive, fair, effective.

Therefore, the negotiations in Bonn need to map a pathway to set an emissions budget, or a limit on climate pollution over time, to ensure the level of global climate action aligns with the requirements set out in the latest science.

The next priority of the negotiations on the 2015 agreement is to ensure that each country’s contribution is fair – meaning that it reflects both its contribution to the problem and its capacity to act. This has been a demand of many developing countries but is missing from the United States’ latest submission.

It is clear that the ‘elements’ to be drafted, and the information relating to contributions, cannot be limited to pollution targets alone, but also must include targets for finance and technology transfers, and address adaptation and ‘loss and damage’ issues.

The scope of what constitutes a ‘contribution’ will be a contested area in Bonn, with the European Union’s submission not contemplating elements outside of emission cuts.

Longer term structures, to allow for review and the increase of climate action will also be a necessary part of the ‘elements’ to be defined throughout 2014.