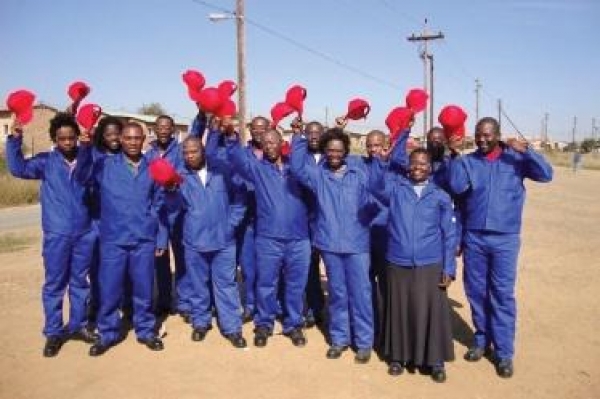 Understanding solar geysers is one of the new life skills we all need to acquire in our society’s leap from fossil to solar energy. As a next installment in our series on solar geyser systems, here is what Tasol Solar has on offer.

Tasol’s technology is SABS tested and approved, and they are a member of the ESKOM IDM solar water heating rebate programme and a registered corporate member of SESSA.

They were established in 2003 as a division of Rand Transmission Company (PTY) Ltd. In 2007, a dedicated renewable energies company was registered as Solar Academy of Sub Saharan Africa (PTY) Ltd, which would become the sole distributor of the Tasol range of solar products in South Africa.

In 2007, Tasol signed a Memorandum of Understanding with the Nelson Mandela Metropolitan University in Port Elizabeth. Soon, they installed eleven solar water heating systems at a post graduate village at the NMMU. In 2008, an extension to the renewable energy Test Centre, which focuses on product testing and development as well as the establishment of training programs within the renewable energy sector.

Tasol was the first to obtain SABS approval on the Evacuated Tube technology for Solar systems, as well as the first company that got a Retrofit solar system tested by SABS and accredited on the ESKOM IDM solar water heating rebate program. After much research and development and taking in consideration the geographical and other environmental challenges in South Africa, they decided on Direct freeze resistant Evacuated Tube solar water heating systems. 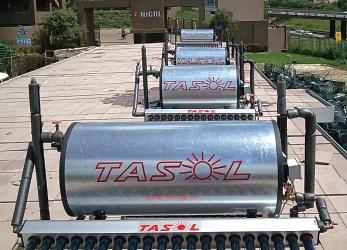 To date, Tasol has been involved with and awarded various big scale domestic solar water heating projects in areas such as:

They are also accredited for the national CEF solar water heating roll-out programme.

It is a Tasol principle to train and use people from within local communities to be involved in projects where possible.

The company has installed a number of high pressure systems in Ekurhuleni. This system includes a storage tank, collector and a Geyser wise controller. The storage tank is mounted above the collector outside on the roof. As the water in the manifold section of the collector gets warmer, the water rises and mixes with the colder water from the tank, eventually heating all the water in the tank to a high temperature. This natural phenomenon is called the Thermosiphon effect. These systems operate on the difference in densities of hot and cold water. The hot, less dense water rises to the tank. No external pump system with an energy source is required. 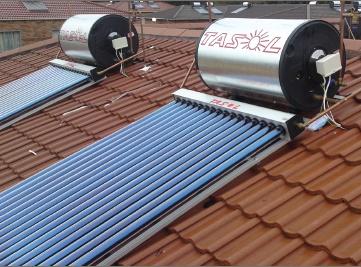 Some of the benefits include:

The collector is an evacuated tube heat pipe collector. It consists of either sixteen or twenty double layered tubes which absorb the sun’s energy. There is no water in the tubes. The heat is transferred via the heat pipe to the manifold section of the collector. The outer tube is a minimum of 2mm glass thickness and conforms to the SABS mechanical test standards.

The Direct Solar Geyser differs from a conventional electric geyser in that it has two additional water ports as required for connecting the solar collector. The geyser still hosts an electrical element and thermostat. Polyurethane insulation between the inner cylinder and outer casement reduces energy- and heat loss.

The conventional geyser thermostat is replaced with an electronic thermostat. The control unit is installed in an area that is easily accessible and enables the home owner to regulate the water temperatures and electricity usage to the geyser. There are four different cycle settings which could support different temperatures per day.

Tasol will in the near future also be one of the official distributors for the Bosch range of solar water heating systems. These cater for indirect flat plate systems ranging up to 300L solar geysers. Bosch Solar Services is committed to developing innovative, renewable energy solar technologies that reduce CO2.