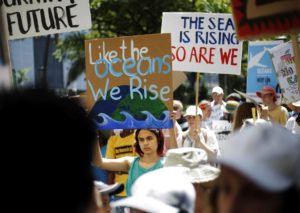 Demonstrators take part in a protest against climate change organised by the YouthStrike4Climate movement in Durban. Image: Reuters / Rogan Ward

In the past year, South Africa has seen a slate of devastating impacts which have brought home the reality of climate breakdown. The raging floods in KwaZulu Natal, that washed away homes and roads, killing over 70, displacing nearly 1500 people, and costing over R1 billion in damage in the province, is just one sad example.

Eastern Cape is facing an ongoing drought that is ravaging the province, leaving many communities without access to water and posing a widespread threat to food security. Likewise, throughout the Karoo region, a crippling drought is driving agriculture to the point of “collapse”.

Studies show that, as a result of human-caused climate change, South Africa faces deepening inequality and is already 10-20% poorer. Therefore, it is worsening an already dire situation of deep inequality, poverty and unemployment, proving that what we are facing now is not only a crisis related to the climate, but also to social justice and human rights.

Over the last few weeks, South Africa has been experiencing outbreaks of violence against foreigners. The xenophobic attacks are also connected to the climate crisis, as increasing climate impacts are eroding traditional livelihoods across Africa, driving people from their homes and increasing migration.

While the impacts of climate breakdown are already devastating, the world’s foremost scientific bodies tell us if we do not act to rapidly transform our societies away from polluting fossil fuels, we will face much worse. South Africa, as one of the world’s biggest climate polluters, has a responsibility to act – a responsibility which we are currently failing to uphold due in large part to government inaction.

The lack of climate action from our government means we will need to take to the streets, build a broad and diverse movement, and demand action for a just transition away from fossil fuels. Across the world, we have seen that when labour and the climate justice movement stand together, we can win big on ensuring robust transformative action on climate justice which brings benefits to the many, not just a few.