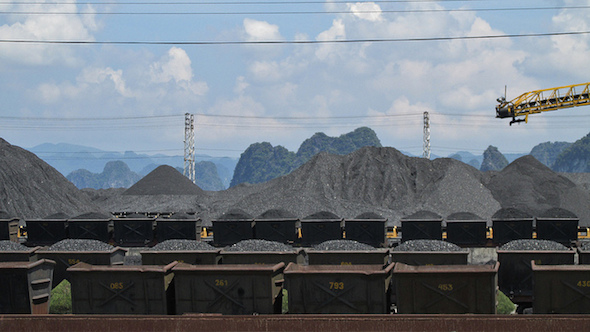 “There is a need to closely monitor environmental issues, especially stringent monitoring of coal-fired power plants; to review the development plan of all coal-fired power plants and halt any new coal power development; to begin replacing coal with natural gas; to responsibly implement all international commitments in cutting down GHG emissions; to accelerate investment in renewable energy, including building market mechanisms, encouraging policies and initiatives, and attract investment for solar and wind energy…”

With as much as an additional 41,000 megawatts (MW) of new coal plants under discussion and a further 12,000 MW under construction, Vietnam ranks as the fourth largest new coal plant builder in the world after China, India and Turkey. (For the sake of comparison, the entire eastern states Australian electricity grid has a capacity of a little over 50,000 MW).

The shifting sentiment towards coal reflects a combination of the profound problems caused by the coal industry, slower than expected electricity growth rates and the increased attractiveness of renewable power generation.

As GreenID, a Hanoi-based non-profit group promoting sustainable energy in Vietnam, noted in a briefing paper last year, electricity planners based estimates of new power plant capacity on higher than realised economic growth rates. GreenID also argued that the Power Development Plan which had been adopted in mid-2011 underestimated the potential contribution of energy efficiency measures and largely ignored the potential of renewables.

As a result, the country had substantially over-estimated the number of new coal plants needed and the volume of coal required. They also flagged that there were substantial social, environmental and economic costs which would rise rapidly if the mooted dramatic expansion in the fleet of coal power stations proceeded.

The risks with a heavy reliance on coal were dramatically highlighted in 2015. In April pollution emanating from the recently-commissioned Vinh Tan 2 power station triggered thousands of residents to block a national highway in an unprecedented 30-hour protest. Government officials promised to solve the pollution problems but the controversy continues. Seven of the protestors were sentenced to 6 to 9 months in prison for their role in the protests.

In August, heavy rain led to the collapse of a major tailings dam at a coal mine with the wave of waste killing 17 residents and flooding a nearby city. Elsewhere, other mines and tailings dams were flooded and damaged too, with mine waste contaminating agricultural land, polluting rivers and washing out into the tourism mecca of Ha Long Bay World Heritage Area.

The heavy health costs of coal were underscored by the release of a study by Harvard University and Greenpeace indicating that pollution from coal plants in Vietnam led to 4,300 premature deaths in 2011. “If new coal plant projects under development come into operation, premature deaths could rise to 25,000 per year,” said Tran Dinh Sinh, the vice director of GreenID.

While the precise magnitude of the shift away from new coal plant construction won’t be known until the latest Power Development Plan is released, potentially as soon as this week, Prime Minister Nguyen Tan Dung’s comments are an acknowledgement that coal’s fortunes have waned significantly since 2011.

The shift in policy is likely to send further shockwaves through the seaborne coal export market.

In recent years Vietnam has shifted from being a coal exporter to being an importer as a number of new coal power plants were commissioned.

The Executive Director of GreenID, Ms. Nguy Thi Khanh, noted in a media release after the Prime Minister’s surprise statement that it was expected that the revised plan would still include a significant number of new coal plants. “We hope that the government will comprehensively reassess all proposed coal plants and put in place policies to rapidly accelerate the development of renewable energy and energy efficiency. In addition, all existing and new coal plants should be fitted with pollution controls and higher efficiency standards in line with international best practice,” she said.