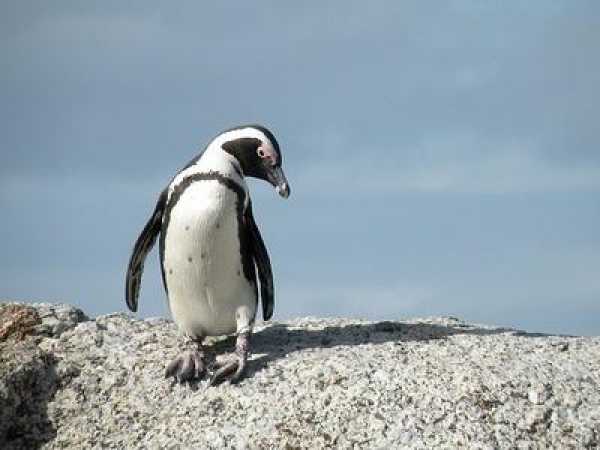 Numbers of the African penguin, which is endemic to South Africa and Namibia, are rapidly declining. Perhaps most of us aren’t aware of this, but African penguins are up against climate change, overfishing, oil pollution and penguin egg and guano collection.

Less than 5% of the original population remains. In the past half-century, numbers have declined by 80%. In the last decade alone they experienced a 60% population decline. Less than half of the minimum viable global population estimate of 50 000 breeding pairs are left.

For its first annual campaign, the Animal Keepers Association of Africa (AKAA) is focusing on African penguins to highlight their plight. Through its Penguin Promises campaign, it aims to get members of the public to commit to an action that can help save this endangered species.

The waddle will pass through Hermanus, Kleinmond, Betty’s Bay, Pringle Bay, Gordon’s Bay and Muizenburg before ending at the penguin colony at the world-famous SANParks Boulders Beach in Simon’s Town, where African penguins and humans harmoniously share sand and surf.

Penguin Promises is supported, among others, by the National Zoological Gardens (NZG) in Tshwane, uShaka Sea World in Durban, the Two Oceans Aquarium in Cape Town, the African Association of Zoos and Aquaria (PAAZAB), the Dyer Island Conservation Trust, Penguin Watch, the South African National Foundation for the Conservation of Coastal Birds (SANCCOB) and SANParks.

The first step of their campaign is to raise awareness of the penguins’ dire situation. Between 23 and 28 May an initiative called Waddle for a Week takes place, during which a group of intrepif walkers will take on the 122km trek from Gansbaai – close to the Dyer Island penguin colony – to Simon’s Town.

Waddle for a Week is the brainchild of Gabby Harris, of Ushaka Sea World, and hayley McLellan, of the Two Oceans Aquarium, who had been set a challenge by AKAA chairperson Robynn Ingle-Moller, of NZG.

According to McLellan, support so far for the initiative has been phenomenal.

“This little idea that we had, has just exploded. We have received so much support already from members of the public, and through sponsorship for clothing, shoes and accommodation,” she enthuses.

Join the waddle in black and white

During the Waddle, the core group of walkers will take the time to raise awareness wherever they go about the African penguin. Members of the public are welcome to walk with them, if only for short distances, and particularly on the last day.

‘We are encouraging anyone and everyone to join us, and to make a promise to do something for the African penguin,’ says McLellan. ‘To make even more of an impact during the walk, we are asking people to wear black-and-white clothing.’

‘Animal keepers are our links, our eyes, as far as conservation goes. The work that they do is of immeasurable importance, and all of us have a duty to support them in preserving the environment not only for ourselves, but for every living creature out there,’ says John Werth, one of two AKAA regents.

‘In terms of the African penguin, that means taking a stand now, and we can all easily make a difference, from only buying sustainable seafood to reducing the amount of plastic and other waste we generate, to lobbying for greater protection of this unique African bird species.’

Werth wants to involve all communities in this initiative. ‘People don’t want just to be educated about conserving the African penguin and other fauna and flora; they want to make a contribution, and Waddle for a Week gives them that opportunity.’

This campaign will be scientifically evaluated to ensure that it meets its objectives, and the research will help to inform future projects.

Take these personal measures to save the African Penguin:

Did you know that anchovies are the primary diet for penguins?  Most of the anchovies caught by the fisheries are turned into fish meal to feed farmed fish or chicken. So if you eat chicken, make sure it is grain-fed!

If you are resident in an African penguin area, respect the boundaries of their nesting sites. Lobby to ensure that the areas are not threatened.

There are tourism adventures in places like Boulders Beach and Betty’s Bay.  Seeing these birds in these controlled wild scenarios will inspire you to take care of them.

4. Lobby to look after the birds

Contact the authorities to ensure that they are doing their best to look after this species.

5. Get involved in coastal clean-ups

Litter in our oceans is a threat to the penguins. If you don’t live on the coast, arrange a waterway clean-up in your area.

To keep the waterways clean, because all the water ends up in the sea, watch that you only put products down your drain that are friendly to the environment.

Plastic products are made from oil. Relying less on oil means that it will not end up in the sea, where it is hazardous to these birds.  Here are some suggestions on how you can use less plastic.

Choose a product that you will only buy locally, perhaps food or clothing. Then it does not have to be shipped in, which means less chance of oil spills.  Furthermore, the more of us that demand local, the less carbon emissions will be created.

9. Pass on this information.

The more promises we all make and keep, the greater the chance of us making a difference to the future of our environment.

10. Pick up other’s litter. Anywhere, anytime. The humility of this action inspires others. And it means the litter does not end up in the sea.

11. Make a pact to be involved in at least one environmental day this year.

12. Become a volunteer for a conservation organisation.

SANCCOB if you live in Cape Town, or a volunteer guide at uShaka Sea World in Durban. Try your local museum or local conservancy.

13. Choose an action that will assist to reduce your carbon emissions.

The lists of these are endless. WALK LIGHTLY ON THE EARTH.

14. Stay informed about the penguin.

The more we know, and share with others, there greater the chance of people effecting social change.