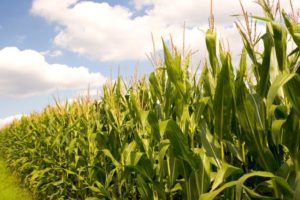 According to the briefing, US chemical giant Dow Agrosciences who is merging with another US chemical giant Dupont, has been conducting field trials of 2,4 D GM maize in SA since 2015. These field trials involve GM maize tolerant to 2,4-D and the 2,4-D tolerant trait stacked with the glyphosate tolerant and/or Bt. insecticidal toxins. They follow the approval by the South African GMO authorities of 2,4 D GM maize in 2012 for import as food, feed and processing, despite extensive public outcry and it not being grown anywhere in the world commercially.

The ACB’s report points to numerous worrying shortcomings in Dow’s scientific safety assessment. Dow has miserably failed to consider the potential combinatorial effects of the many novel gene sequences used and the risks posed to human health by multiple toxic herbicide uses in the field. Crucially, the results from field trial data fail to demonstrate the efficacy of GM crops to prevent yield loss due to pest or weed damage. If anything, the results suggest a potential yield drag for herbicide tolerant varieties. 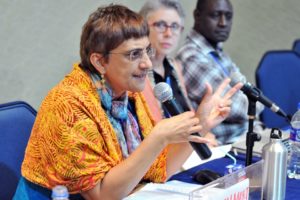 According to ACB Director Mariam Mayet (pictured above), “It is totally unacceptable that farm workers, farmers and consumers will be exposed to more and new cocktails of chemicals in this war against nature and evolutionary biology. These toxic chemicals will further pollute water and soils and load our staple food with even more novel and risky genes and toxic chemical residues. This is even more disturbing in an era where mega-mergers in the agribusiness sector are conferring increasing power to an oligarchy of global seed and agrochemical producers”.

The synthetic auxin (plant hormone), 2,4-D is a war chemical that has long been linked to wide-ranging serious illnesses including cancers, birth defects, reproductive toxicity and disruption of endocrine systems. Scandinavian countries have banned the use of 2,4 D and there are partial bans in place in Canada and South Africa. Research shows that the commercial use of 2,4-D resistant seed/crops could lead to a 30-fold rise in 2,4-D pesticide use.

The European Union has on 17 May 2017 rejected the importation of 2,4-D GM maize and glufosinate tolerant GM maize, as a result of the increase in the global use of the 2,4-D toxic chemical that raised concerns surrounding endocrine disruption and embryonic development. 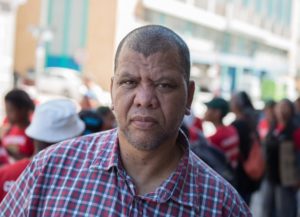 Trevor Christians (pictured above) of the Commercial, Stevedoring, Agricultural and Allied Workers Union (CSAAWU) is deeply concerned about the impact of the 2,4 D toxic pesticide on farm workers, who will bear the brunt of escalating pesticide use and exposure.

Christians noted that “farm workers are the most marginalised of the South African workforce, often receiving below living-wages and surviving on precarious seasonal work. When farm workers fall sick they rarely receive workers’ compensation, assistance with healthcare or paid sick leave. How can we knowingly pile even more suffering onto farm workers?” he asked. 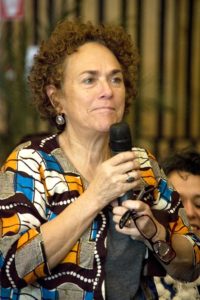 Mercia Andrews (pictured above) of Trust for Community Outreach and Education (TCOE), an organisation that has for many decades struggled with farmworkers and smallholder farmers for land and agrarian reform and food sovereignty says “the current state of our maize production, where large corporations own our staple food, shape our production systems and introduce risky technologies with impunity, is totally unacceptable. We demand a transition out of these systems to agroecology –where we produce food in an ecologically sustainable and socially just manner.”

Andrews further points out that “South Africa is experiencing rapid resource depletion, and simultaneously, the country is wracked by a ‘double burden’, where there is both severe undernutrition and overweight and obesity, due to the reliance on cheap, over-processed, single food diets.”

All three groups are calling for the immediate halting of the current trials, a ban on GMOs and the urgent need for South Africa to transition to alternative pathways that support and strengthen agricultural biodiversity and dietary diversity.

After 40 years of assurance from Monsanto that their herbicide is benign, the safety of glyphosate is currently under review worldwide, following a 2015 finding from the World Health Organisation’s (WHO’s) cancer research arm, the IARC, that the chemical is a class 2a carcinogen.