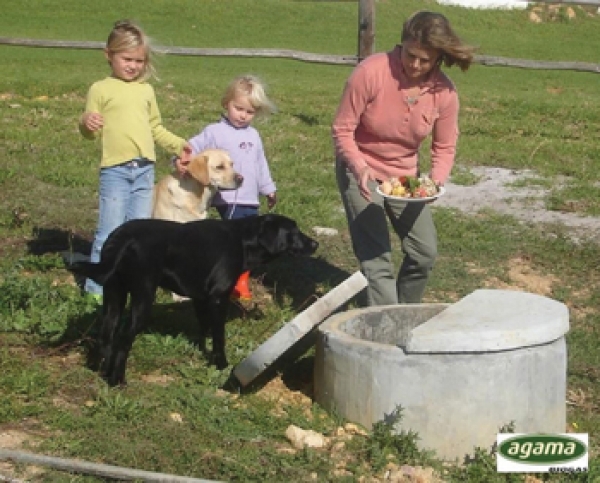 Energy can never be destroyed – it can only be changed from one form to another. Why then do we believe that waste is the end of the line?

“How people have disposed of their excrement over the ages makes a fascinating story. Today what characterises a first-world culture is flush toilets. They remove germs, and with that much of the burden of disease and poverty.”

So says Marisa Naude of Agama Biogas. Bio-digesters have everything to do with waste. They are an ancient technology, originating in China but occurring worldwide. Today they are being revived to solve problems with waste disposal & energy security.

A family or community puts their organic waste – kitchen scraps, manure, sewage and grass cuttings – into a specially designed underground tank. Beneficial bacteria consume the organic material creating a nutrient-rich liquid fertiliser, and in the process release a biogas,primarily methane. The gas is piped directly to a gas cooker as the energy source, or it may be used for electricity generation in larger applications. The waste has been turned into free fuel and fertiliser, all without tons of flush water, kilometres of underground piping and costly chemical processing. The more biodegradable waste is fed to the digester, the more biogas and fertiliser it produces.

Unlike a septic tank, the system is sealed and promotes the controlled build-up of methane. The methane accumulates to a level that kills parasites and cysts; as waste is added it is slowly consumed and sterilised by the methane-producing bacteria and the high methane environment. The former faecal matter is now a 99% pathogen-free fertiliser. To boot it reduces your carbon footprint because methane is burned instead of escaping into the atmosphere, as occurs with septic tanks and landfills.

“Methane is 21 times as bad as CO2,” Marisa added, “it is the ultimate greenhouse gas.” 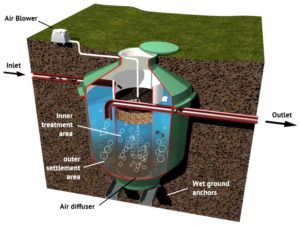 Some bio-digesters are being sold for domestic use but the focus is on projects in rural areas where they can solve sanitation and fuel problems.

There is an inspiring project near Richmond in KwaZulu-Natal:

“The countryside was denuded as the community had been chopping firewood for cooking and warmth. Bio-digesters have improved their quality of life dramatically. People aren’t walking kilometres a day to get firewood; animal waste goes into the digester so there is less health hazard; biogas burns cleaner so there are fewer chest conditions and clinic attendance has dropped; and the land is being replenished with the fertiliser.”

In urban areas waste is a big municipal challenge – sanitation systems are overloaded and sewage lands in storm-water pipes, ending up in rivers and the sea. Another problem is vulnerability of the poor to increased energy prices. An option used extensively in China and India is energy generation through biogas, which may well be a solution in our cities too.

Engineers at Agama custom design bio-digesters for any conditions and to any size. They have also designed a patented prefab digester that can be bought and installed ready-made. It looks rather like a rainwater tank and produces four hours of burning time a day. The prefab option takes one-and-a-half days to install (with gas lines and linked to a sewer system), and costs R35 000 fully installed. A brickand-mortar digester takes from 1 to 3 months to install depending on size.

“Bio-digesters are a sustainable solution – they require more involvement than pushing a flush button, but once up and running they work well and need little maintenance.

Middle-class urbanites don’t want to know what happens to their waste, so there is a shift in mindset that has to take place for some.