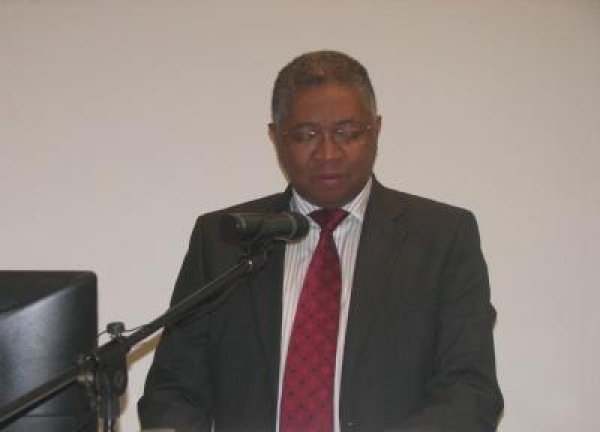 We are going to have a huge water supply problem by 2030. A report by the Council for Scientific and Industrial Research warned that deteriorating water quality could lead to the depletion of freshwater resources even sooner than 2030 if South Africa experiences prolonged droughts. The call for help has been heard by scientists and researchers at the Stellenbosch University Water Institute.

The institute, which forms part of the University’s well-known Hope Project, was officially launched at a Gala event at Wallenberg on World Water Day. Prof Russel Botman (pictured), vice chancellor of Stellenbosch University and Ms Naledi Pandor, Minister of Science and Technology attended.

‘People don’t like to be called poor,’ said Prof Eugene Cloete, the Dean of the Faculty of Science at Stellenbosch University.

‘The Water Institute is creating WEALTH to make the world a better place: Water, Energy, Agriculture, Land, Technology and Health.’

Masters and PhDs work for water

Cloete refers to the Stellenbosch Water Institute as a collective institute with a disciplinary team of researchers. The Institute has 50 masters and PhD students on board. They are funded by the South African government and the European Union.

‘We are a national asset. Simple technology can make a big difference.’

‘This will bring hope, dignity and security to the population. Polluted water carries major health consequences, especially due to droughts and water-borne diseases.’

Dr Russel Botman, Vice Chancellor of Stellenbosch University, said it was worrying that our water situation is so critical.

‘Life can’t exist without water. And then you find out it takes more than 140 litres to make a canned fizzy drink. We have to think more about our lifestyles.’

‘16,000 die in South Africa of diarrhoeal diseases each year. The institute’s research will be used to tackle problems and make a real change. We must secure sustainable solutions with the help of science,’ Botman said.

‘Stellenbosch University is an institute that works and we like things that work,’ said Ms Naledi Pandor, Minister of Science and Technology at the launch of the Water Institute.

‘We have to bear the Millennium Development Goals in mind constantly. The MDGs weren’t agreed upon just to have a nice set of goals, they are real and legitimate.’

‘Unfortunately the goal of halving the number of people without access to water and sanitation by 2015 will not be met. It has however started to focus sectors to relieve problems and change societies. More recognition is also given to progress being made. South Africans don’t like to talk about progress; we like to immerse ourselves in negativity.’

‘Climate change is already affecting our water supply. The dry areas in South Africa are growing. Science plays a critical role in helping to sustain the progress. Our solutions should also provide job opportunities and encourage green businesses.’

Pandor believes South Africa tends to underfund those who create green enterprises or those who rely on green knowledge.

‘We are focusing narrowly on creating new knowledge, instead of applying old knowledge. We need to shift our resources and support green businesses.’

‘Reports say in the near future 42% of the world’s water supply will only be coming from four countries, and South Africa is one of them. We plan to protect and enhance our natural resources. 70% of our fresh water goes towards agriculture. Only 30% is used in industries or for households. Food and energy are starting to compete for fresh water, and we can’t afford to have hostile competition in that way. We need to help the rest of Africa and build a sustainable continent, altering the lives of the poor and vulnerable.’

There are some famous quotes guiding the Water Institute: