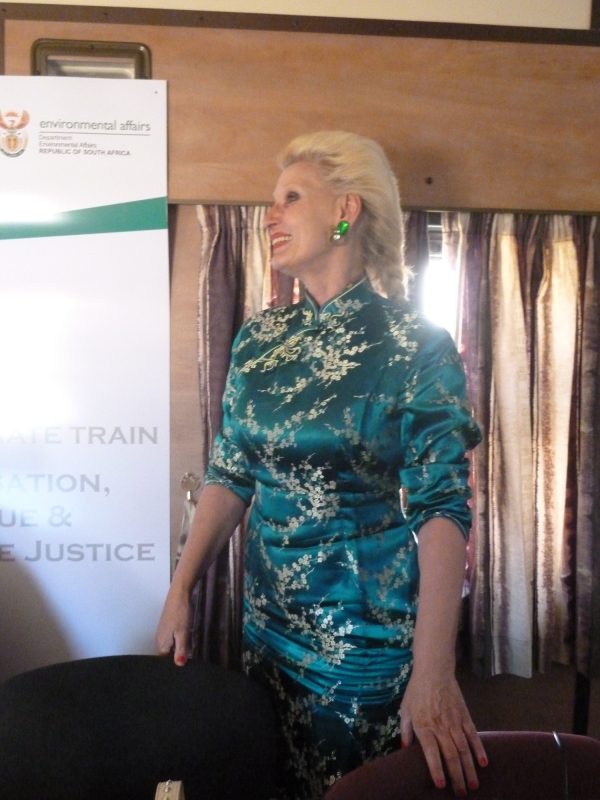 When the Climate Train arrived in Johannesburg, Nasrec station earlier this month we all knew we were in for an eventful three days.

However, unless you’re a football fan, you probably have very little reason to visit Nasrec Station. Since the Soccer World Cup was hosted in South Africa last year, this pristine station has for the most part been quiet. But when the train pulled up, voices could be heard in every  corner of the remote station – whether it was shrieks of excitement from the children or simply opinions and views which were being raised by community members in the conference carriage.

An estimated  350 visitors flocked to the station over the three days, enabling the Climate Train team to engage in meaningful conversations with the Johannesburg communities.

One discussion which struck home for a lot of the visitors was that of Ms Mariette Liefferink, one of the country’s foremost environmental activists.

On Wednesday the train was fortunate enough to host this dynamic woman.

Close to 25 women and men from Soweto gathered in the conference carriage and awaited the arrival of the Federation for a Sustainable Environment CEO.

Dressed in her signature traditional bottle green Chinese dress and matching earrings, Mariette walked through the door and her captivating presence was immediately felt throughout the 15m long carriage. Addressing a very serious yet suppressed issue,acid mine drainage, Mariette shared her insight and knowledge about the world’s second most dangerous environmental threat (next to climate change) with the crowd.

360 thousand litres of acid mine waste in our rivers

“We have sadly sacrificed water for gold. A magnitude of 360 thousand litres of acid mine waste, containing toxic and radioactive waste run through our rivers and streams every day, wiping out all fish, frogs and living species along the way and causing irreversible damage.”
Mariette went on to explain that the mining industry has a history extending over more than a hundred years of breaking up, excavating and leaching some of the most poisonous substances known to man, and then abandoning such operations. As she continued to talk and share some of the most vivid pictures on the projector, the group which comprised mostly of Women in Environment members,listened intently. She said the poor will bear the brunt, as  more informal settlements are being built in close proximity to these toxic rivers, and some even being built on radioactive ground.

“The problem with radioactive water is that it looks clean and fresh until lime is added to it. That is why it’s so hazardous. This water is filled with heavy metals such as uranium, which can cause chronic kidney disease and cancer. There are serious health consequences associated with acid mine drainage, still you find children play in this water and animals drinking from it. This toxic orange coloured water is unfit for consumption and the dangers of the polluted water are unknown to the public. It seeps into the soil, affecting the crops and animals that eat off the ground. ”

During the discussion, Msetsana Modise from People Life Environment Agency posed a question:

“How will we know whether the land which houses are built on is safe and healthy ground? Are there people in our communities to advise us on these matters? As a young person I am worried about the access of information.”

“Next to the richest of mines live the poorest of people. This land is toxic and unnatural. After many years of environmental advocacy and lobbying the government has looked into the dangers of radioactive mine dumps. South Africa has one of the best legislations and constitutions in the world, but unfortunately it is not enforced. Families living in these areas must be relocated. Communities need to make their voices heard and start speaking out. You have been given this information now, so go out and share it.”

Environmentalists are seen as threats

Gugu Mbatha from Vosloorus said that before Mariette’s discussion, she had no idea about the dangers caused by acid mine waste. “I was blown away! The orange coloured rivers and ground she spoke about  we see every day, yet we are so uninformed about the danger it poses. It stretched my knowledge and made me realise how desperately we need people like Mariette to inform and educate us. I wish more people were able to attend today’s discussion.”

Msetsana said the type of transparency portrayed by Mariette is what the community needs.

“It was such an informative discussion. Government officials should be coming into our areas and educating us about it, instead they hide such information from us, knowing the dangers that we live under. I could relate to everything she is saying because I live right next to a mine dump. As an environmental activist in my community I try to spread the word, but now you end up becoming a threat, because uninformed people think you are trying to stop development.”

Mariette’s passionate and unselfish service to communities was clear throughout her hour long discussion. She has played a major part in bringing an environmental crisis, such as exists in the western parts of the Gauteng region through which the Wonderfontein Spruit flows, to the attention of the broader South African civilian population.  Her work is of particular value to large urban settlements in industrial areas.