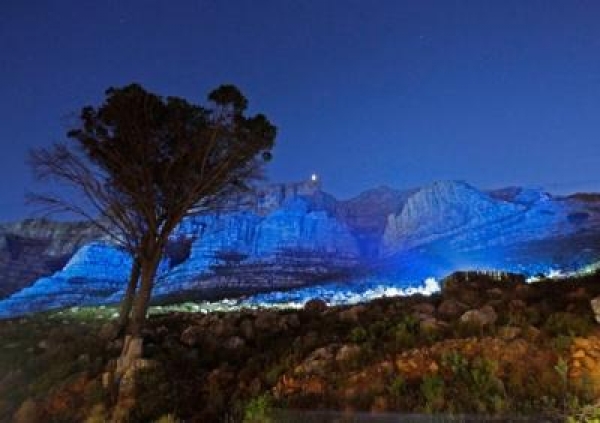 Southern Africa’s best known landmark, Table Mountain, was lit in blue on Friday night by HRH the Prince of Orange (Netherlands) and Under Secretary General of the United Nations and the Executive Director of UN Habitat. The lighting was to commemorate the right to water and this years’ UN World Water Day themed ‘Water and Urbanization, Responding to the Urban Challenge’ which is held in Cape Town at the International Convention Center.

Half of the world’s population lives in cities today and in the next two decades nearly two-thirds of humanity will be living in cities. Cities are performing well with regards to the provision of drinking water and basic sanitation to their inhabitants according to the United Nations. They have kept coverage rates stable in the face of massive population growth. Provision of drinking water is however not the only issue of concern to the UN. Open defecation – humans defecating outside – is the ugly stepsister of clean water scarcity.

Recently, UN Member States endorsed a General Assembly resolution supporting the five-year drive and calling to end open defecation. One out of four urban dwellers lack this basic service. Two-and-half billion people lack access to even simple pit toilets, which is three times as many people as lack access to clean drinking water resulting in two million preventable deaths per year, mostly of children under the age of five from intestinal diseases.

The United Nations is meeting in Cape Town, with over a thousand representatives from around the world, to discuss the topic of Water and Urbanisation, responding to the urban challenge.

“In the slums of Nairobi, the favelas of Rio de Janeiro, the bustees of Kolkata, and even right here in Cape Town’s townships, the provision of safe water and basic sanitation to the urban poor is a critical challenge facing the world today. The global economic crisis and the consequences of climate change is rapidly increasing population numbers in urban dwellings.”

HRH the Prince of Orange, in his capacity of the UN Secretary General’s Advisory Board on Water and Sanitation (UNSGAB), said:

“The urban water challenge must be recognised for what it really is; a crisis of governance, weak policies and poor management, rather than a scarcity crisis. We need to shore up water security against the added problems of pollution, and climate change. We need innovative ideas and good practices to implement. This conference has a duty to urge a reversal of the decline in per capita investment in water and sanitation for cities. It has a duty also to alert decision makers at every level to this water and sanitation crisis.”

Cape Town to wake up the world

The events organized for World Water Day in Cape Town are an opportunity for UN-Water to take stock of the initiatives of all partners, and plan for increased attention to these pressing issues. The focus of the international community on water has often masked the growing problem of poor sanitation. This is the most dehumanising aspect of the daily battle for survival of the urban poor, not to mention the health threats posed by water-borne diseases that come with unclean water and unsafe sanitation.

Indeed improper solid waste disposal is a growing threat to health and the environment. Urban institutional arrangements are fragmented, lack effective regulation and roles are not structured for efficiency or success. Investments in infrastructure and planning have not kept up with the rate of urbanisation. Water and waste services have not been given the priority they deserve, and they show significant underinvestment, in comparison with their economic returns. Africa for example invests only 4% of its GDP in infrastructure compared to 14% in China.

Utilities in many developing countries are characterised by high water losses, unaccounted for water, bloated staffing, weak governance and financially unviable operations. Although there are some important exceptions, in general they have a long way to go in improving efficiency and effectiveness. In countries around the world, a publicly stated government policy on the right to sanitation and hygiene is long overdue..

UN-Water is pushing for stronger political commitment at the national and the local level to put safe drinking water and basic sanitation at the very top of the poverty eradication and the sustainable development agendas.