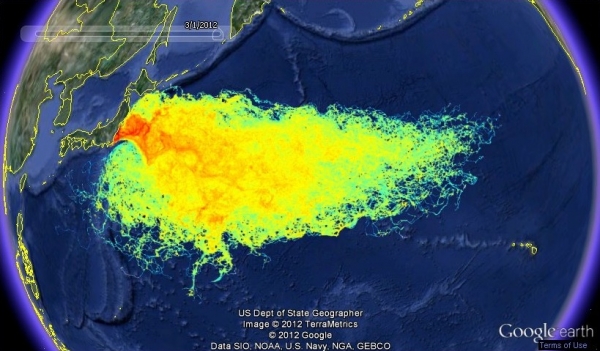 Over the last year the threat of radiation hitting the United States from the Fukushima nuclear disaster has gone from a conspiracy theory, to a possibility, to a flat out fact.

Now, scientists with the Woods Hole Oceanographic Institute have confirmed that a wave of highly radioactive waste is headed directly for the US west coast.

In a segment on the Big Picture with Thom Hartmann, Kevin Kamps, of the group Beyond Nuclear, joined the show to discuss the dangers of radiation in Japan, the United States, and the world.

Last year, at the behest of the United States, TEPCO intentionally released 3 million gallons of radioactive waste into the Pacific ocean and now the world is set to experience the consequences of this disastrous decision.

Here in the United States, the EPA and other corrupt federal agencies, are literally ignoring the danger posed by the radioactive waste.

In fact, during the first few months of the multiple Fukushima meltdowns, the NRC intentionally mislead the public by covering up the dangers posed by radiation released from Japan.

Sadly, corporate interests and nuclear apologists in Japan and the United States continue to push for more nuclear power plants while ignoring the dangers to the entire world.

People fed up with ‘progress’

In Florida, Progress Energy is pushing forward with a plan to build two new nuclear power plants at a time when the public is largely against this dangerous, possible civilization ending technology.

“Progress Energy, like a giant stone juggernaut, is trying to steamroll over Florida residents by building two new nuclear power plants in Levy County despite the recent Fukushima disaster, warnings from environmentalists that the strain on the aquifer and the environment will be too great, and local residents who are ‘just saying no’, wrote Tony Muga.

What leaves many Floridians scratching their heads is the fact that after the Three Mile Island meltdown, the Simi Valley meltdown, the Chernobyl meltdown, the ongoing Fukushima meltdown, the ‘effluents’ (radioactive discharge) that ALL plants are allowed, the countless tritium leaks at plants across the nation, anyone would even consider building another nuclear plant ever again.”

The people of the world must stand up in mass and DEMAND the immediate suspension of any new nuclear power plants as well as full scale independent tests of all operational nuclear plants worldwide.