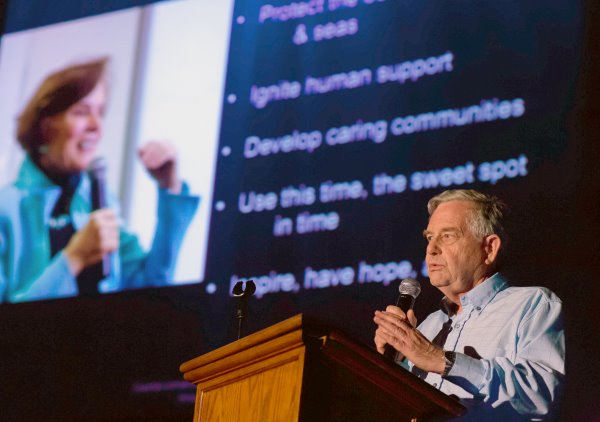 A parasite that lives in a fish’s mouth and becomes its tongue? Sixty million viruses in a teaspoon of sea water? A shimmering sunset glistening through the curl of a golden barrel? Just a few snippets from the Wavescape Slide Night night in Cape Town.

More than 200 people sat enthralled through 10 inspirational talks by 10 ocean thought leaders who shared their science, photos, videos, ideas and adventures in an informal gathering at the Centre for the Book.

Wildlife photographer Roger Horrock stunned the audience with his visceral footage of his interactions with dolphins and rays. Education Centre Manager at Save Our Seas Shark Centre Eleanor Yeld-Hutchings explained the work they did for the Shoreline TV series all around South Africa, and had the crowd gasping in awe at photos of the parasitic crustacean that enters fish’s mouths until the tongue drops off. The visitor takes over the role of the tongue, changing the relationship from parasitic to symbiotic.

Craig Foster, film director and kelp forest expert told the story of the Sea Change project, and his passion to recreate our ancient roots to the sea via almost surreal interactions with a myriad of wild animals just a stone’s throw away from Cape Town in the depths of False Bay.

Epiphany Stransom Ford, aka Scuti, had people blinking in astonishment at how an 11 year-old could so eloquently convey such a wise and deep-rooted passion for ocean conservation.

Mkhululi Silandela, part of WWF’s conservation team to make small-scale fishing sustainable, provided evidence of the great work his organisation is doing to overcome the many barriers faced by subsistence fishers. Carina Bruwer, musician and record-breaking open-water swimmer, with a powerful mix of humility and humour, blasted the audience with a ray of inspiration around her long distance swimming exploits.

Hope for saving our seas

Ray Chaplin, Adventurer of the Year and ocean ambassador, had the audience shaking their heads after his body-bashing, sometimes grim, often soulful but ultimately rewarding riverboard down the Orange River, collecting garbage and spreading a key conservation message along the banks of South Africa’s longest river.

Tony Ribbink, head of the Sustainable Seas Trust, spoke of hope for saving our seas through working with veteran conservationist Dr Sylvia Earle, who is in South Africa to launch six unique Hope spots along our shores.

Marine scientist Dr Maya Pfaff, marine scientist focusing on the most abundant biological entity in the ocean: the virus, gave a fascinating talk on how and why the oceans change colour, with incredible examples from local waters.

Ross Frylinck, co-director of the Wavescape Festival, said he got “a general sense of how talented, passionate and generous our ocean community in SA is. The cross-section of interests was captivating, and I felt both entertained and educated by the talks. If I had to single-out a moment, it would be watching Roger Horrocks’ film clip of a baby dolphin mimicking its mother’s movements in a synchronised mock flounder hunt. It was totally mesmerising.”

Shani Judes, festival manager, said “From an organizers point of view it’s so beautiful to watch people get inspired. The messages of conservation, love and respect for our oceans is vital. We need to have these platforms for people to share their experiences so we can carry the message to others. Our ocean is a mysterious place filled with such incredible sea life and it’s up to us to keep this intact.