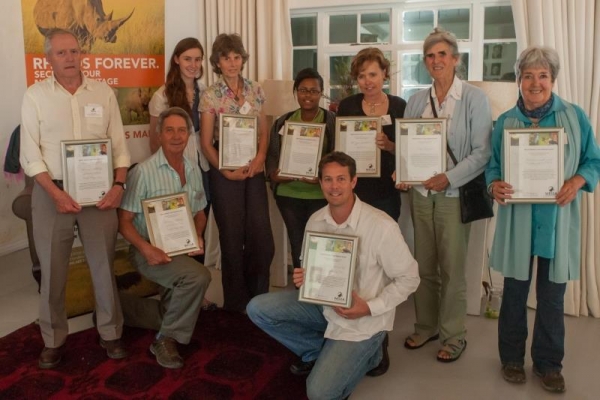 A select group of individuals and organisations were formally acknowledged for their invaluable contributions to the Western Cape’s environmental conservation and environmental education sectors at WESSA’s 65th Annual Regional Meeting and Awards Ceremony, held at Vondeling Wine Estate near Wellington on Saturday 26 October.

The annual Regional WESSA Awards were presented in a variety of categories to following recipients: the Outramps group of the CREW; the Friends of Vlakkenberg and the Friends of Silvermine Tuesday Clearing Groups; Father John Oliver (posthumously); Pat Featherstone (founder of Soil for Life); Fiona Watson (of the Friends of Meadowridge Common); Pinnacle Point Beach and Golf Resort Conservation Trust; and the Upper Liesbeek River Garden team.

A certificate of appreciation was also presented to Dr Bridget Johnsen, outgoing Regional Representative of the Western Cape WESSA Members, for her passionate, loyal and dedicated service to WESSA and conservation at large.

The programme for the day included the formal proceedings of the Annual Regional Meeting, that were chaired by longstanding WESSA Member and previous Board Member, John Green, and supported by the Regional Manager, Helena Atkinson. Staff presentations of WESSA’s regional and national activities followed, highlighting local achievements over the past year. Bridget Johnsen from the Vondeling Wine Estate then spoke about the Paardeberg Sustainability Initiative, which is a WESSA-affiliated group that is working to protect the Paardeberg area from threats to biodiversity and to natural resources.

The guest speaker for the event was Colin Bell, who is a conservationist, co-founder of Wilderness Safaris, advocate for sustainable tourism, and co-author of the book “Africa’s Finest, which presents a critical analysis of the safari tourism and wildlife industries in Sub-Saharan Africa. He gave a thought-provoking presentation, clearly articulating the significant challenges facing conservation that are driven by human greed, consumption, poaching and money laundering. He also suggested a number of solutions that must be implemented broadly to give our wildlife any chance of surviving as we know it into the next decades. The talk was a timely reminder to WESSA members of our organisation’s roots in wildlife conservation, and served as an inspiring call to courageous individual and community action. 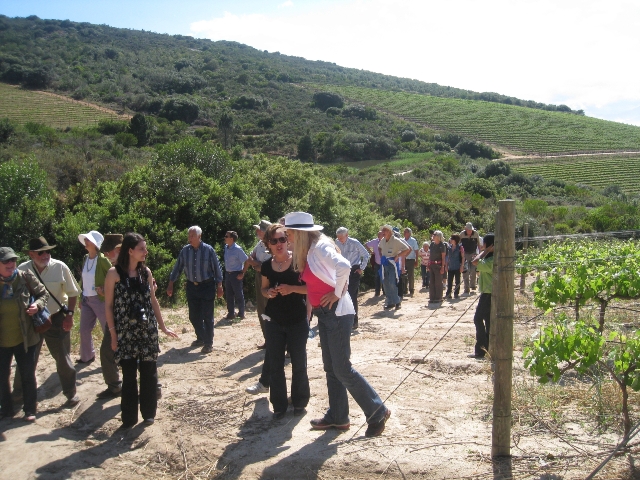 WESSA Members and staff during the guided walk around Vondeling Wine Estate.

Before the start of the formal proceedings several guests enjoyed a short guided nature walk on the slopes of the Paardeberg mountain above the Vondeling Wine Estate, which is a Champion Status Biodiversity and Wine Initiative (BWI) certified estate in the Paardeberg wine region near Wellington. The Estate is also a Gold WESSA Business Member and has supported the organisation since 2011 with the production of a special 2010 Shiraz wine under the label of Cura, profits from the sales of which come to WESSA.

The event was attended by WESSA members from throughout the Western Cape, Friends groups and other interested individuals.

To the volunteer members of the Outramps group of the CREW (Custodians of Rare and Endangered Wildflowers) programme for ten years of dedicated work surveying 6000 square kilometers of the Southern Cape, collecting 2000 records including those of 300 rare and endangered species and thereby contributing hugely to CREW’s database of indigenous flowering plants. Added to this scientific effort is their commitment to public education about our rich botanical heritage using media like iSpot. 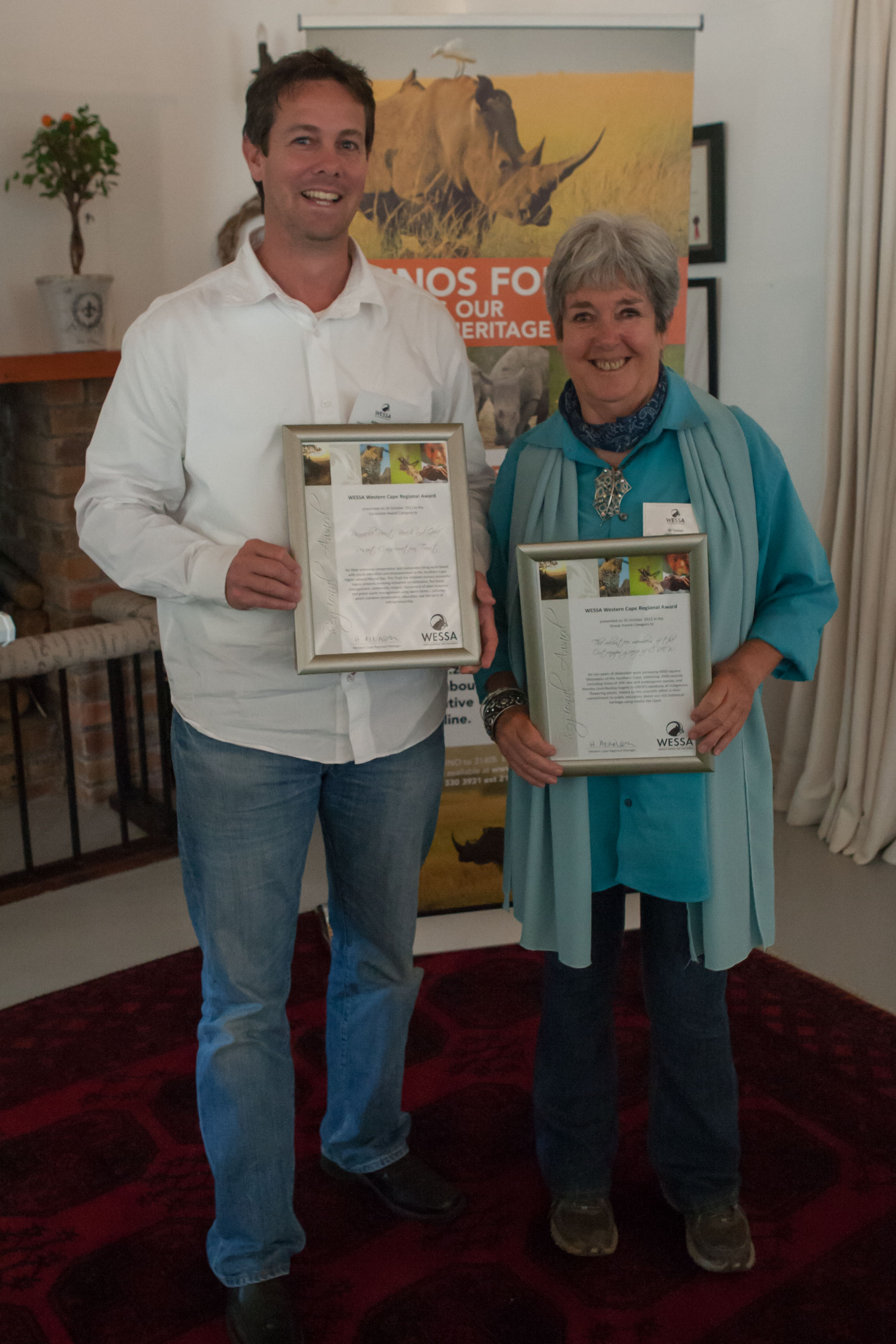 The Award was collected by Di Turner from the Outramps group of the CREW in the Southern Cape.

To the Friends of Vlakkenberg and the Friends of Silvermine Tuesday Clearing Groups for their significant contribution to the eradication of alien invasive plants in the southern areas of Table Mountain National Park. This involves sustained, tenacious work over more than a decade which has made it possible for SANParks to allocate nearly half a million Rand to other priority areas. 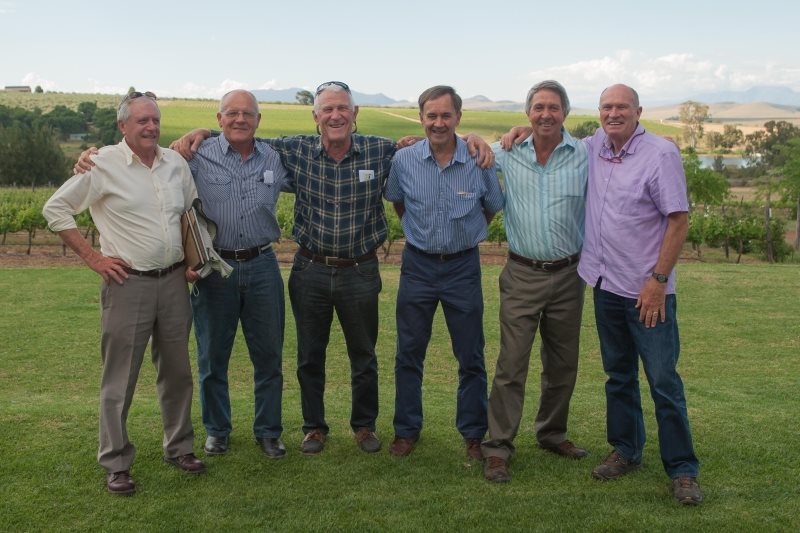 Friends of Vlakkenberg and Friends of Silvermine Tuesday Clearing Group.

Posthumously presented to Father John Oliver of St Marks parish, District Six, for tireless social and environmental activism including his work in the interfaith movement of South Africa, his outspoken opposition to the development of a shopping mall on the banks of the Princess Vlei, his leadership role in the Princess Vlei Forum, his condemnation of the exploitation of the earth which he likened to a form of apartheid, his readiness to roll up his sleeves and work alone when necessary and realising the vision of the Van Blommestein Park in Zeekoevlei which is now part of the international Quiet Garden Movement. 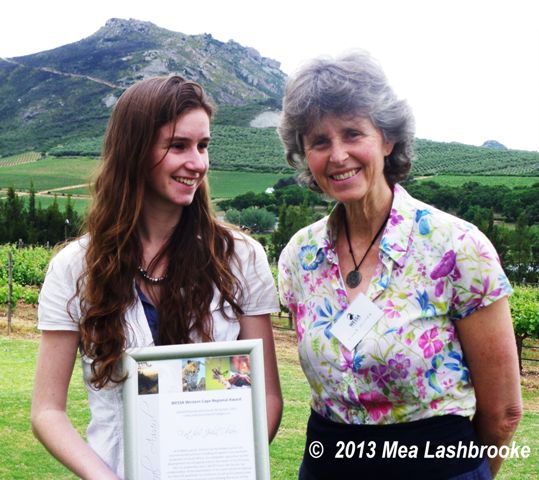 The award was collected by Father Oliver’s wife, Mrs Emma Oliver, and his daughter Sarah Oliver.

To Pat Featherstone, founder of Soil for Life, an NGO which has with great imagination, verve and energy responded to the pressing need for more food security in a city and a country where the spectres of poverty and hunger are still very real. Through community workshops, educational outreach, practical demonstrations and the production of clear, step-by-step guides, Pat’s vision and hands-on leadership have led and contributed to the reawakening urge to garden, grow and get hands dirty in the earth, the soil, essential for our life.

To Fiona Watson of the Friends of Meadowridge Common who has for more than four decades added to the understanding and conservation of local botanical heritage, firstly via her work on the Rondebosch and then on the Meadowridge commons. Through her photography, meticulous research and record keeping, public speaking, educational outreach, watchdog and historical documentary efforts, she has purposefully, rigorously and consistently worked to safeguard one of the last remnants of Cape Flats Sandplain Fynbos on the Peninsula and in so doing has helped to conserve a site valuable both for its botanical interest and as a recreational facility for the local residents and Cape Town. She has truly lived up to the FMC motto “Treasure Your Heritage”. 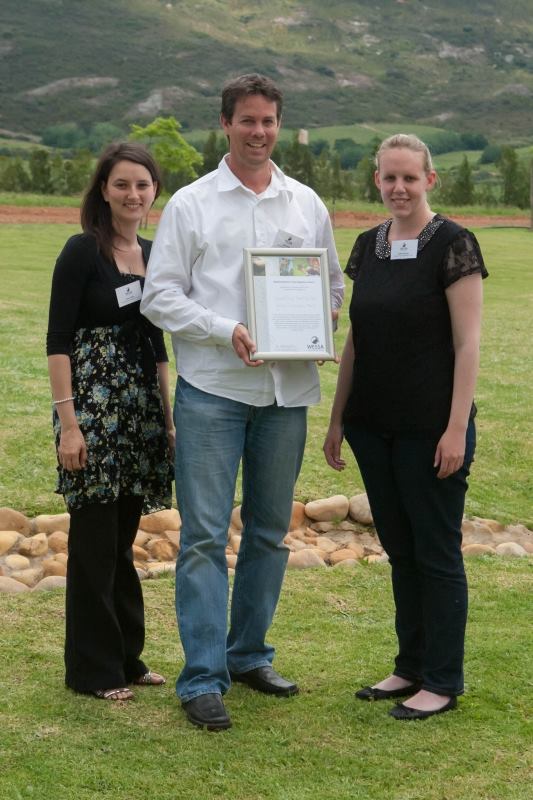 The Award was collected by Aiden Beck – Pinnacle Point Beach.

To the Upper Liesbeek River Garden team (with particular appreciation to Joan Parker, Miranda Alexander and Matthews Moetsi) for their landscape-enhancing efforts to establish the Upper Liesbeek River Garden (ULRG), a project which has seen the development, rehabilitation and maintenance of a ‘little bit of paradise’. This would have been impossible without a dedicated, informed and sustained ten-year effort of volunteers who have transformed an eroding, sterile wasteland into a green space alive with biodiversity, which is an inspiring example to others.