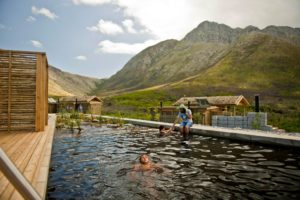 Kogelberg Nature Reserve is considered by many to be the most beautiful of the Cape’s protected areas. Its exceptional diversity and quality of fynbos means it is also considered the heart of the Cape Floral Kingdom. Image: Cape Nature

Innovative work is taking place across the Western Cape to increase the Protected Area network, and in turn help reach global Protected Area targets. And more importantly, they’re being driven through pioneering conservation models, funded by the Table Mountain Fund (an associated Trust of WWF-South Africa).

The Convention on Biological Diversity agrees, and in 2010 they set up the Aichi Biodiversity Targets for the 2011-2020 period. These aim to ensure at least 17 percent of terrestrial and inland water, and 10 percent of coastal and marine areas are conserved through Protected Area (PA) agreements. 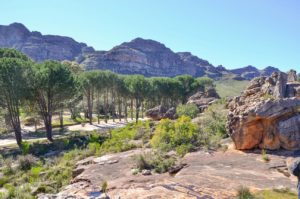 The Cederberg wilderness is only three hours outside Cape Town, but it feels like a different world. The Cederberg Mountains, burnt orange by iron oxide, dominate the landscape. Jagged sandstone rock formations, like the Maltese Cross and the Wolfberg Arch, and ancient San and Khoi rock art, make this area truly spectacular. Image: Cape Nature

The Table Mountain Fund (TMF) realised that through Protected Areas, large parcels of the Cape Floral Kingdom (many of these Critically Endangered Fynbos and Renosterveld landscapes) can be protected – in some cases, forever. Working with partners, they now make a significant contribution to the Western Cape’s Protected Area network.

Kerry Maree, Manager of the TMF, says, “By helping South Africa to meet our international commitments to the Aichi targets, we’re successfully showcasing South Africa as a credible driver of conservation.”

She adds, “The challenge is that most of South Africa’s biodiversity is found on private land. That’s why it’s vital to work with private landowners, many who farm for a living, to encourage greater buy-in to conserve our natural world.” 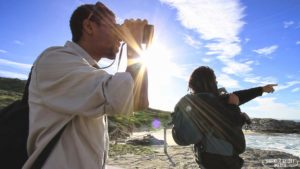 De Hoop Nature Reserve is a favourite for hikers, cyclists, and bird and whale watchers. The reserve, which is 34 000 hectares, is just three hours from Cape Town, in the Overberg. The neighbouring marine reserve, which extends 5km out to sea, is one of the largest marine protected areas in Africa. It conserves a vast and fascinating variety of marine life. The reserve is a World Heritage Site. Image: Cape Nature

Protected Areas are protected by law. There are different types of Protected Area agreements available that conservation-savvy individuals and organisations can sign. These include private nature reserves, conservation servitudes and biodiversity agreements, among others.

In all, there are currently 93 operating private nature reserves across the province, covering 171,000 hectares (this is roughly the size of the Addo Elephant National Park in the Eastern Cape). Three declared Protected Environments (PEs) cover 12,800 hectares. Biodiversity agreements (which are not as secure as PEs) cover 27,000 hectares and biodiversity partnerships add an additional 56,000 hectares.

In the City of Cape Town, the most biodiverse city in the world, the Protected Area network has nearly doubled in the past 10 years. In 2009, just 29,000 hectares were signed as PAs. At the time, the City partnered with the TMF to grow this. Today Protected Areas cover 55,222 hectares – including those under the City’s management, as well as CapeNature and SANParks. 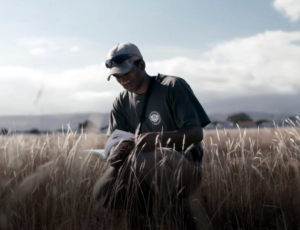 The City has been able to take a groundbreaking approach to increase its PA network. City of Cape Town’s Jacques van der Merwe says, through TMF support, the City has tested buying Critically Endangered landscapes as an offset against land available for development.

Over five years, the City acquired 17 adjacent properties in the Dassenberg corridor along the West Coast, totaling over 1,000 hectares. This is one of the most important climate change corridors in the country. Here you’ll find the last intact Atlantis Sand Fynbos, as well as Critically Endangered Swartland Shale Renosterveld and Swartland Granite Renosterveld. Through the agreement, the City could make less biodiversity-rich land available for much-needed development.

Van der Merwe says, “We’re now looking at rolling out this model in other areas, like the Klipheuwel cluster.” The cluster is home to the final three Protea odorata plants left in the world. 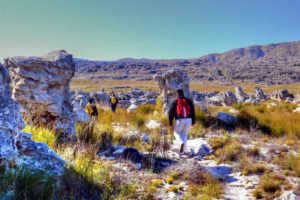 The Groot Winterhoek Wilderness Area is known for its rugged, wild landscape, with exceptional rock formations carved by the elements. This mountainous area lies about 120km north of Cape Town, near Porterville. It is also one of Cape Town’s sources of fresh, clean water, and is a World Heritage Site. Image: Cape Nature

According to McCann, while it’s vital to expand the Protected Area network, it’s also necessary to regularize existing Protected Areas. “The Western Cape has a well-established network of Protected Areas. But we need to make sure those declared PAs are more secure in terms of governance, administration and legal requirements.” 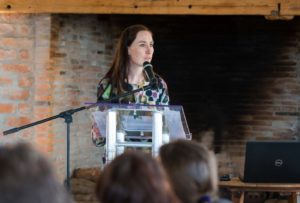 Maree says the Cape Floral Kingdom is losing not only its animal and plant species, but also entire ecosystems that provide the foundations for human well-being. Threats include habitat loss (such as urban and agricultural expansion), invasive alien plants and habitat degradation.

“That’s why it’s our moral responsibility to protect our world-renowned biodiversity. It’s also our political obligation to care for our natural heritage. As the TMF, we’re working with our partners to take up this challenge. And Protected Areas are an important way for us to achieve this.”