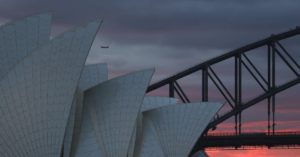 The City of Sydney has became the second state capital in Australia (after Hobart a week earlier) to officially declare a climate emergency. With climate change considered a threat to human life, Sydney councillors unanimously supported a motion put forward by Lord Mayor Clover Moore to mobilise city resources to reduce carbon emissions and minimise the impact of future change.

An official declaration of climate emergency puts a government on a “wartime mobilisation” that places climate change at the centre of policy and planning decisions.

While interpretations differ on what a “climate emergency” means in practice, governments have established a range of measures to help meet the targets set by the Paris climate agreement. Under this agreement, 197 countries have pledged to limit global temperature rise to less than 2℃ above pre-industrial levels, and ideally no more than 1.5℃.

With 2018 having brought all manner of record-breaking climate extremes, and global average temperatures projected to reach 3.2℃ above the pre-industrial average based on current national pledges and targets for greenhouse emissions, Sydney’s recognition of a national emergency is both highly appropriate and also a major turning-point for Australia.

Although a signatory to the Paris Agreement, Australia’s greenhouse emissions have risen over the past four years since the repeal of the carbon price. With Australian emissions most notably increasing around transport, the United Nations climate discussions currently being held in Bonn have raised concerns over the nation’s ability to meet its Paris commitments.