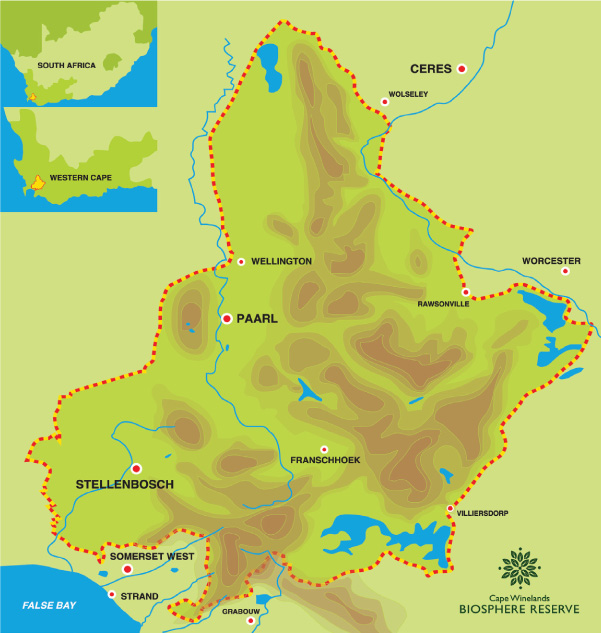 Did you know that you might live in a Biosphere Reserve? If you are from Stellenbosch, Pniel, Franschhoek, Paarl, Wellington, Rawsonville or  Villiersdorp you live inside the beautiful Cape Winelands Biosphere Reserve (CWBR) while people from Ceres, and the Strand live just outside it.

The CWBR was designated in 2007 by the United Nations Educational, Scientific and Cultural Organization (UNESCO) as one of its 621 Biosphere Reserves. South Africa presently has six of them and in the Western Cape there are also the Kogelberg and Cape West Coast Biosphere Reserves.

The main aims of biosphere reserves internationally are to promote biological diversity, sustainable development and logistic support, the latter including research, education and training.

Every biosphere reserve has a pristine core area where no urban development is allowed, a surrounding buffer area that protects the core and a transitional area in which urbanization and cultivation can take place.

As such it represents a new planning concept which promotes both conservation and development on a broad scale, activities that were often in conflict with each other.

In this regard, the CWBR has commissioned the drafting of a spatial framework plan, based on bioregional planning principles, that provides detailed spatial guidance for future land-use management.
In the CWBR, the core area comprises provincial and local authority nature reserves as well as one private nature reserve (Elandsberg).

It includes areas such as the Hottentots Holland, Jonkershoek, Limietberg and Jan Marais Nature Reserves. Buffer zones include mostly natural areas that are registered as private nature reserves or are included in private conservancies, such as the Bottelary and Greater Simonsberg Conservancies.

In these areas the main objective is to protect and maintain the rich biodiversity by supporting activities such alien eradication and fire management, and to maintain the integrity of the rivers that flow through them. These areas render important ecosystem services such as providing clean water and sequestering carbon dioxide, and they can be utilised for low impact activities such hiking and bird watching.

Sustainable development is a broad concept that includes sustainable living and human well being. Living  sustainably implies that we must all as  the inhabitants of he CWBR be committed  to reduce our  impact on the environment by measures such as recycling, stopping or minimising all forms of pollution, saving electricity, fuel and water, and maintaining trees.

Human well-being requires the eradication of poverty through economic development,  job creation and education, achieving racial harmony and equality, the resolution of conflicts and the availability of health and other services to all.

It is clear that the CWBR cannot deliver on all these areas of interest, but it is actively pursuing its aims, as will be discussed in follow-up articles.
The initiative to establish the CWBR was taken by the Cape Winelands District Municipality, which is now a partner and provides secretarial services. It is registered as a non-profit company and is administered by a Board of Directors.

You can actively support the CWBR by becoming a member. Membership is free and open to all who subscribe to the ideals above. Write to Quinton Balie via email or write to Cape Winelands District Municipality, PO Box 100, Stellenbosch 7599 for an application form.

Of the core areas, 93% is managed by one institution, namely the Western Cape Nature Conservation Board (CapeNature). Most of the core is situated along the slopes of high mountain ranges. Sections of the core area also form part of the extensive Cape Floral Region Protected Areas World Heritage Site.

This was a serial nomination and the site was inscribed on the World Heritage List in 2004. It is made up of eight protected areas covering 553 000 hectares. One of the protected areas is named the Boland Mountain Complex. of which form part of the CWBR core areas.

Buffer zones include mostly natural areas that are registered as private nature reserves or are included in private conservancies. Some private mountain catchment areas (declared under the Mountain Catchment Areas Act of 1970), managed by CapeNature, are included as part of the buffer.  Transition areas consist mainly of urbanized, cultivated and otherwise transformed lands.

The CWBR lies within the Cape Floristic Region (CFR) that is regarded as a hot-spot for biodiversity conservation worldwide (Myers et al. 2000). Of the species within the CFR, 68% are endemic to the region (Cowling & Holmes 1992). The CFR includes all the vegetation types within the area known as the Fynbos Biome, commonly referred to as Fynbos (Rebelo et al. 2006).