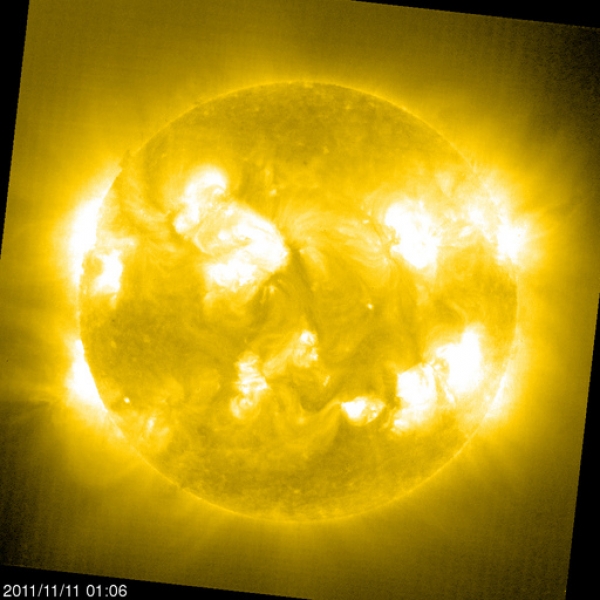 Having a problem with your internet or cellphone connection? Or making strange bleeps yourself? You may have to blame a higher power – the sun. On Wednesday, Nov. 9th a magnetic filament in the vicinity of sunspot complex 1342-1343 erupted, producing a M1-class solar flare and hurling a coronal mass ejection (CME) into space.

But what are CME’s?

CME’s are ‘flames’ that shoot out from the sun that typically cause disruptions to telecommunications and power supplies if they make a direct hit to earths magnetosphere (our subtle magnetic shield).

A Glancing Blow to Earth

Although Wednesday’s eruption was not squarely aimed at Earth, the CME is likely to deliver a glancing blow. This could add to the impact of another CME already en route. The earlier cloud was propelled by a filament eruption on Monday (Nov. 7th) and is also expected to hit earths magnetosphere on Nov. 11th. According to the SA National Space Agency (Sansa) our Ionosphere hasn’t been as charged up for a long time so local HF working frequency devices may be affected. High-latitude sky watchers may even see an aurora overhead this weekend.

The gigantic balls of gas that broke off from the sun this week, have magnetic areas as large as 200km2, which results in massive amounts of X-Rays and ultra-violet rays being emitted towards the Earth. You could have five hours’ worth of tanning in five minutes if caught up in radiation from such solar flares. More such waves are expected, with increasing regularity as the our sun approaches the peak of its 11-year cycle over the next 3 years.

Kobus Olckers of Sansa says, “We are so dependent on technology these days and if the internet messes up there is a problem. If you go down to the beach you’ll get a tan quicker than you expect. For the next three to four years – if your electrical supply or communications are interrupted, do not blame it all on the utilities that provide those services,”

For updates on the solar flares visit spaceweather.co.za or twitter @SpaceweatherSA.