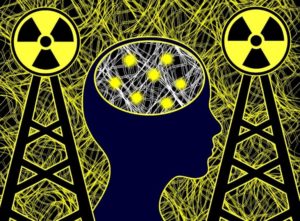 A group of bioelectromagnetics experts have written a letter to World Health Organization Director-General Dr. Tedros Adhanom Ghebreyesus with grave concerns about the public health and environmental impacts of exponentially increasing use of wireless radiating devices relying on radio frequencies and extremely low frequency electromagnetic fields throughout the world today.

As the authors of more than a thousand relevant peer-reviewed publications on this topic and concerned citizens, they are urging the WHO to convene an independent global Commission on wireless radiation and health, and recommend biologically-based EMF exposure limits.

The safety standards used for personal wireless devices such as smart telephones were originally formulated back in 1970’s before the advent of personal wireless devices, when less than 0.1% of the civilian population lived close to RF transmitters of that period such as broadcast and TV antennas. Use of RF-radiating antennas on or close to an individual’s body came decades later with the development of the mobile telephones in 1990’s.

Today in the U.S., Australia, and much of the world, there are more phone numbers than people and over 90% of the world population is regularly exposed to unmeasured levels of RF radiation close to the body. For the first time in human history the rapidly developing brains of young children are irradiated on a regular basis for many hours a day. This exposure to RF radiation is likely to increase even further when the space-based internet from low orbit satellites is completely rolled out in the next 2-3 years.

Even though important consideration was originally given to all likely users of EMF including children, women and smaller adults in the 1970s, safety compliance testing of new wireless devices has now been focused on models of large male adults using a head size of army recruits of weight 100 kg to determine the coupled electromagnetic energy.

Several reports in the peer-reviewed scientific literature have shown a considerably higher incidence of coupled electromagnetic energy (EME) being deposited in the brains of children, smaller adults and women because of a closer placement of the cell phone radiating antenna to the brain for these users. 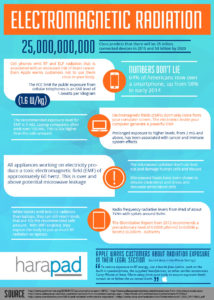 Lastly, several long-term exposure studies conducted with laboratory animals have shown higher rates of cancer, DNA and other organ damage for EMF-exposed animals as compared to those that were not exposed.

Many expert scientists around the world have done research documenting significant biological and environmental effects of these man-made electromagnetic signals that can lead to pathological consequences and other diseases.

These diseases include cancer and other risks that have been described in many reports; also additional reports such as the Bioinitiative Report, the REFLEX Project Report, the Interphone Project Report, the National Toxicology Program (NTP) Report, the Ramazzini Report, as well as results in high quality studies by scientists without conflicts of interest.

These effects can occur at levels well below the existing recommended RF-EMF exposure limits recommended by the International Commission on Non-Ionizing Radiation Protection (ICNIRP) and endorsed by the WHO EMF project to avoid acute short-term heating. Several expert organizations have recently documented the fact that the ICNIRP constitutes a self-appointed, self-monitored group that only represents a minority scientific viewpoint. 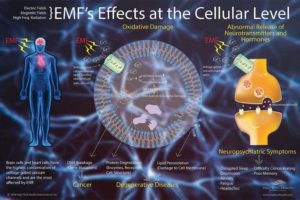 A poster by High Tech Health about the dangers of EMFs.

Most recently, an expert panel advising the Swiss government concluded that low levels of EMF cause serious health problems, especially for children, the elderly, and those with existing diseases. Following the outdated guidelines of ICNIRP could have grave consequences for humanity and the environment.

In 2002, the WHO/International Agency for Research on Cancer (IARC) classiffied extremely-low frequency magnetic fields as a Group 2B human carcinogen that increases the risk of childhood leukemia. Static/ELF magnetic fields are emitted by ubiquitous electrical appliances and powerlines. Low intensity static/ELF –EMF has been reported to cause biological effects that could be detrimental to health, e.g., oxidative stress, genetic, and neurological changes. In addition, man made static/ELF-EMF could affect wildlife and possibly survival of many species.

In 2011, the WHO/IARC classified all radiofrequency electromagnetic fields as “possibly carcinogenic to humans.”

Several important appeals, resolutions and other documents were issued in the last few years by the scientific community warning public health authorities about the necessary reduction on EMF exposure limits and its associated risks. These include the Freiburg Appeal, the Salzburg Resolution, the Catania Resolution, the Benevento Resolution, the Porto Alegre Resolution, the Copenhagen Resolution, American Academy of Pediatrics recommendations, Seletun Scientific Statement, International EMF Scientist Appeal, 5G Appeal, 2020 Consensus Statement of UK and International Medical and Scientific Experts and Practitioners on Health Effects of Non-Ionising Radiation (NIR), as well as many other important documents.