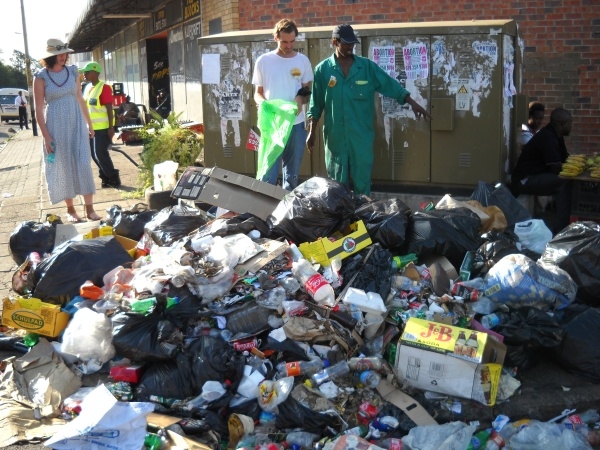 ‘Many hands make light work’. This idiom was particularly true for the Climate Train on Monday, 7 November, when the entire team came together for a collaborative AMbush (guerrilla gardening) on the corner of Market and George Street, Krugersdorp.

A once dirty and filth ridden corner is now a cleaner, unpolluted area. The Climate Train team  had removed a total of 25 garbage bags filled with vile waste and dirt.

In the cool of the afternoon, in the busy streets of Krugersdorp, the Climate Train team  engaged with the community. Armed with garbage bags, gloves and heaps of determination, the team got their hands dirty and quickly transformed a space adjacent to the taxi rank into a beautiful clean piece of art.

Johannes Nkosi, who owned a fruit stall next to the dump, said the smell which was coming from the dirt affected his sales severely and posed a health risk to everyone who walled pass.
“There are always mosquitoes and flies lingering around the fruit, spreading its germs all over. No one wants to buy from us because it smells so bad. It’s really unhygienic to have open bags of dirt lying around where mice and cockroaches run around. Many customers have complained, but what can we do? It’s supposed to be the municipality’s responsibility to clean up and collect the dirt every week, but the dirt has just been pilling up.”

While Wayword Sun from AMbush was planting trees, Mbali Vilakazi was composing a poem on the pavement, creating a serene and calm atmosphere. Meanwhile the rest of the team was collecting dirt and cleaning up.

Suit and tie picks up a broom

Even though Francie Sithole was due to clock in at work at 6 o clock, only 45 minutes away, it didn’t stop him from lending a helping hand. Dressed in his black formal suit, Francie stepped out of his  comfortable car, tucked his  tie into his white crisp shirt, rolled up his sleeves, picked up the broom and started sweeping.

“I was driving on my way to work and noticed what was taking place. As a resident, I felt compelled to get out of my car to come and help. Seeing the street so dirty really breaks my heart. Why are we always waiting on other people to come and help us, why can’t we do it ourselves? After all, it’s our dirt that lay strewed on this pavement,” said the Angus Tours travel agent.

Once the dirt was removed, Dylan Mcgarry from COPART, picked up his paintbrushes and created a beautiful art piece on the ground, depicting a huge tree with its branches and leaves growing in every direction. Maggies Singo (9) daughter of the fruit stall owner couldn’t resist and pitched in too. Dressed in her grey and blue school tunic, she ran back and forth from the stall, where she was helping at the corner where Dylan was painting.

This was the first time she held a paint brush in her hands.

“I have never painted before. I can’t believe all the dirt is gone. It looks so clean and beautiful. I can’t wait to show my friends what I’ve done,” she said with a smile.

As the day’s activities drew to a close, onlookers and passerby began to crowd around the corner. Taxi driver, Aubrey Lefashe could not believe his eyes and committed himself to taking care of the plants by watering them everyday. “I am amazed! It this really our place? It looks beautiful! The only way people could continue to dump their dirt here is if they are blind. Seeing this work motivates me to be more responsible in taking care of our environment. We were living in hell with all this disgusting dirt, but now, we have a small piece of heaven.”

The collaborative Ambush and clean-up operation in Krugersdorp is indicative of the vision of the train’s mobilisation, dialogue and climate justice. Even though the local municipality failed to respond to the Climate Train’s invitation to visit the train and participate in the activities, the team didn’t allow it to stop the momentum. Instead they gathered all their tools and took their skills to the street. 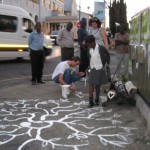 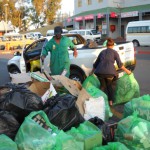 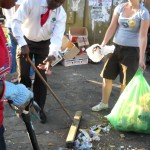