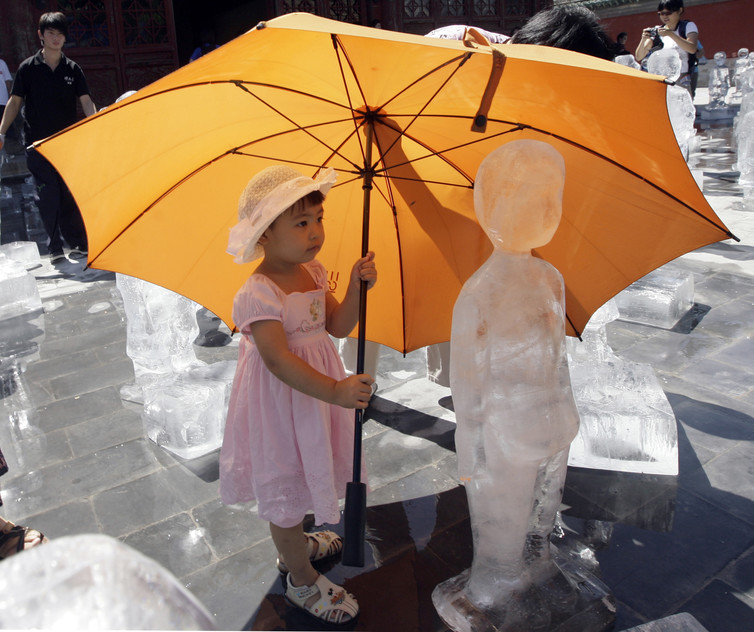 A girl holds an umbrella over an ice sculpture, made from water taken from the Yellow, Yangtze and Ganges rivers, at an exhibition by Greenpeace. Image: Jason Lee

In 2013, one of the world’s leading public relations experts, Bob Pickard, cried out to the climate world: “mobilise us!” In a frustrated op-ed, he listed 20 key problems with climate communication. One of them was “story fatigue”: bland stories with “highly repetitive and stale” themes.

One key risk is complacency – a perception that the issue is now resolved. This is despite the risk increasing, as our response lags.

One study found that Australia had the highest percentage of climate sceptics in the world, (17% as compared to 12% in the USA). Analysis of global attitudes in 2015 found that, while across the world, 54% of people considered climate change a “very serious problem,” in Australia this figure was only 43%.

Communicating the climate message to inform, but also engage and influence behaviour has proven intensely difficult. Over a decade of research on this issue has highlighted the need for communication to engage with people’s “deep frames” – beliefs formed over a lifetime, which are mostly subconscious.

To overcome this impasse, climate communication needs to engage people at a philosophical, sensory and feeling level. People need to be able to feel and touch the new climate reality; to explore unfamiliar emotional terrain and be helped to conceive their existence differently.

How is this to be done? The world must turn to its artists: storytellers, film-makers; musicians; painters and multi-media wizards, to name a few.

Under the global Future Earth initiative, a team of around 60,000 scientists and social scientists has been assembled to understand and report on the physical, tangible dimensions of the problem. I argue we need 60,000 arts and humanities experts to focus upon the intangibles – the communication, engagement and meaning-making aspects of the problem.

Eco-philosopher Timothy Morton has developed a new way of telling the climate story. He recasts global warming as a hyperobject – something which is “massively distributed in time and space relative to humans.” Its arrival, he has said, renders humans “weak, lame and vulnerable.”

Unlike the Anthropocene conception, which puts humans conspicuously at the center of the problem, the Hyperobject narrative pushes humans to the side. They are no longer “masters” of Earth, they are now subject to its whims. Human laws, institutions and other systems of responding to problems are, in the face of this “hyperobject”, revealed as trivial. 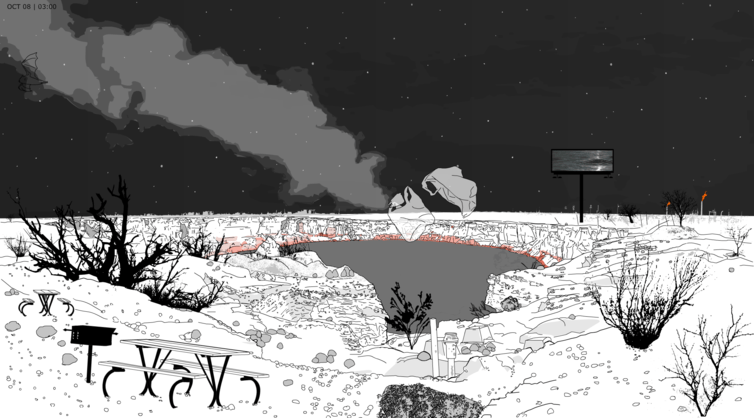 Of course many artists are already grappling with climate change. ARTCOP21, a gigantic global climate art festival, coincided with the Paris Climate talks, while the Reset-Modernity exhibition in Germany “offers a set of disorienting/reorienting procedures…”

Amitav Ghosh’s new novel The Great Derangement (2016) considers why modern humans seem disabled in the face of the climate threat. Olafur Eliasso’s installation art, The Weather Project, alludes to the prominent role the sun now has in the consciousness of the climate-aware citizen.

Australian artists are undertaking similar explorations. John Reid’s participatory performance art, Walking the Solar System asks people to hold a frozen walking stance for one minute, during which time they imagine the Earth turning 1,800 kilometres. This helps them connect to planetary rather than human notions of existence, thereby perhaps starting to bridge the cognitive and sensory disconnect.

A collaboration of poetry, art and sculpture in the On the Verge exhibition revealed the global warming lived experience as a precarious one. Meanwhile, Gotye’s Eyes Wide Open music video contrasted pictures of present day industrialisation with images of the earth as a barren wasteland.

The Australian Environmental Humanities hub and Climarte help to network Australian creative responses to climate change, while the Performance Climates event to be held in Melbourne this July, examines the role of performance art and theatre in responding to it. In November, Sydney will host the Global Ecologies – Local Impacts Conference, which considers the Environmental Humanities, Arts and Social Sciences.

But the scale of effort, when compared to the role artists have played in other significant societal shifts, is piecemeal.

Consider the artistic and cultural flourishing that accompanied the rise of Ancient Greece, supported by the agents of change Pericles and Alexander the Great.

Or the Islamic Golden Age of the 8th and 9th centuries, which saw a boom in both art and science. Or the Enlightenment, which featured arrays of great scientists, philosophers, musicians and artists such as Galileo; Newton; Descartes; Spinoza; Kant; Hobbes; Voltaire; Goya; Bach and Mozart.

If a new human civilisation is to emerge that can live within its ecological limits, artists and communicators must have a prominent place, alongside the great scientific and technological innovators of our times.

Humanity will never be able to defeat a threat it cannot perceive.

By Elizabeth Boulton. Source: The Conversation