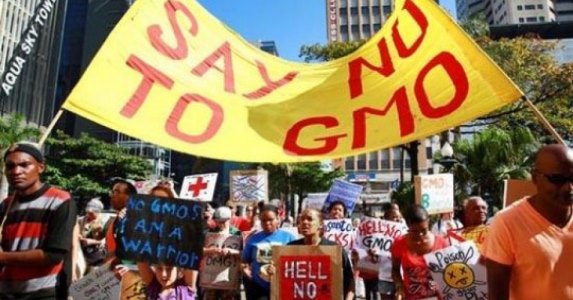 A pro-organic, anti-transgenic GMO (Genetically Modified Organisms) campaign is being staged in Cape Town, as part of the international event ‘March Against Monsanto’ being held on 6 continents and over 500 cities worldwide.

March Against Monsanto is a protected, peaceful, festive, family event and children are encouraged to participate. Participants should dress creatively and bring along inspiring banners and placards. The grassroots movement was founded by Tami Monroe Canal in 2013. Every year, millions of people take to the streets in a worldwide peaceful protest united against Monsanto’s attempted monopoly and corporate control over the worlds’ seeds and food webs.

We are concerned parents and citizens from all walks of life. We aim to raise awareness of the destructive impact of Genetically Modified Organisms (GMOs) and their toxic pesticides on our communities, our health, our environment, our economy and all living beings. Ordinary people are outraged that these experimental products have been forced on us without our knowledge or our consent. As conscious and responsible consumers, we have a Right to Know what’s in our food and a Right To Choose 100% gm-free, uncontaminated, organic and nutritious foods.

Monsanto is a U.S. chemical company notorious for its toxic products including Agent Orange, dioxin, DDT, PCBs and rBGH. They have a history of environmental destruction, pollution and cover-ups. For decades, Monsanto has contaminated, leaked and dumped hazardous and toxic substances into our air, water, soils and oceans, even the cells in our bodies! Monsanto is associated with many of the 114 toxic superfund sites in USA.

They occupy governmental positions, lobby politicians to influence policies favourable to their products, and contribute enormous sums of money to governments, universities and agricultural groups to promote the gmo agenda.  They have been caught falsifying and manipulating data, and have faced numerous lawsuits for unsubstantiated advertising, contamination and bribery. Including in our very own South Africa.

Monsanto is the leading producer of genetically modified seeds and Roundup, the most widely sold weedkiller in the world.

What is a GMO?

In traditional seed breeding techniques, peasants and farmers have carefully selected, crossed and propagated plants of the same species for desirable characteristics and complex traits like flavour, size, yield, adaption to microclimates, disease resistance and resilience to cope with stresses like salty water or soil, drought and flooding.

A Genetically Modified Organism (GMO) is the result of an unnatural laboratory process taking genes from one species and inserting them into another across the species barrier to try to obtain a desired characteristic.

Genetic engineers force DNA from one organism to another using bacteria or viruses to “infect” plant or animal cells with the new DNA, firing DNA into cells with a gene gun, injecting new DNA into a fertilized egg, or electrocuting the sperm membrane to force the new DNA into the sperm. These processes do not occur in nature. Uncontrolled mutations and complex interactions occur at multiple levels within the organism when even a single new gene is inserted.

These imprecise techniques result in unintended and unpredictable effects including changes in the nutritional content of food, toxic and allergenic effects and poor crop performance. Co-existence is not possible as they contaminate non-GM crops and wild relatives through horizontal gene transfer.
GMOs are living organisms – once released into ecosystems, they cannot be recalled. The impacts are irreversible. They continue to multiply in the environment and GM genes are passed on to future generations. These risky experiments should be strictly quarantined in laboratories.
Most GMOs are genetically engineered for two traits: To tolerate heavy doses of weedkillers and to resist a particular insect. The toxin is engineered into the plant so that every cell of the plant constantly expresses that insecticide.  The result is now widespread weed and insect resistance to these two traits. Farmers must use more agrochemicals like 2,4-D and Dicamba, and harmful chemical cocktails to combat them.

GMOs are patented and farmers may not save seeds for the following crop. The companies who profit from GMOs should be held liable for contamination of non-gm crops. Instead, Monsanto has sued farmers whose organic crops have been contaminated. The Current GMOs on the market, are a highly profitable scam perpetrated by unscrupulous chemical companies with criminal histories to sell their war chemicals and patent seeds.

Chemicals pollute the air, soil, water and oceans and contribute massively to collapse of ecosystems and climate disruption. They strip the soil of nutrients and kill beneficial bacteria, microbes, pollinating insects, birds and other non-target organisms. Glyphosate, the active ingredient in Roundup products, is classified by WHO (World Health Organisation) as a Category 2A “Probable Human Carcinogen”. (as well as countless other scientists who have found various other side effects)

While the impacts of GMOs and agrichemicals on humans is not being monitored, studies show that they cause cancer, diabetes, birth defects, infertility, obesity, cholesterol, heart disease, immune-deficiency diseases, damage to kidneys, liver, hormonal disruption, allergies, learning disorders etc. Developing infants and children are especially vulnerable. Thousands of scientists have stated that there is no scientific consensus on GMO safety.

The South African regulators do not conduct safety tests on GMOs and pesticides and they lack the capacity to monitor them. They rely on data from the biotech companies which is not published and peer reviewed and is heavily edited under Confidential Business Information.

South Africa is the only country in the world where the staple food (Maize Meal) is genetically modified! The majority doesn’t even know what a GMO is! 86% of the maize and amost all Soya and Cotton grown in South Africa is GM. Most processed products like bread, baby formula, fast foods and snacks contain GM ingredients. Cottonseed oil is used in tinned sea foods and vegetable oils. Check your labels for GM ingredients like High Fructose Corn Syrup, maltodextrins, soy milk, protein or lecithin, Aspartame, MSG, Flavour Enhancers, Colouring and E-numbers etc.

The EU, USAID and mega-wealthy philanthro-capitalists like Bill Gates have embarked on a wave of neo-colonialism disguised under the philanthropic mantra of “feeding the world”. They force developing nations into trade agreements and policy reforms to facilitate the interests of multinational monopolies like Monsanto, Syngenta, DuPont, Cargill, Nestle and Pepsico (which Gates also invests in.) These draconian policies result in biopiracy, landgrabs, loss of livelihoods, loss of our diverse agricultural heritage, poverty and hunger.

Studies show that peasants feed 70% of the world population using 30% of the world’s resources. The industrial food chain feeds 30% of the world’s population using 70% of the resources. Leaders should promote food security through sound agroecological practices and support small farmers instead of this industrial, petro-dependent, chemically intensive agricultural model. Global control of commercial seeds, agrochemicals, fertilizers and genetics is now in the hands of just four corporations. Family farmers cannot afford the inputs.

The world produces enough food for 14 million people. About 50% is wasted, including the resources used to produce it. GM monocrops are used mostly for biofuels & livestock feed, not food.

GMOs have been grown in USA for two decades, yet 17 million children struggle with food insecurity. One in four children lives without consistent access to enough nutritious food to live a healthy life. In South Africa, where GM crops have been grown since 1998, one in four people regularly suffers hunger and more than half of the population are at risk of going hungry, despite the fact that we produce more than enough food. Africa has been transformed from a net exporter to a net importer of food.

This is only the tip of the iceberg, if you want more, please visit these pages on Facebook:

Let’s take back our food!