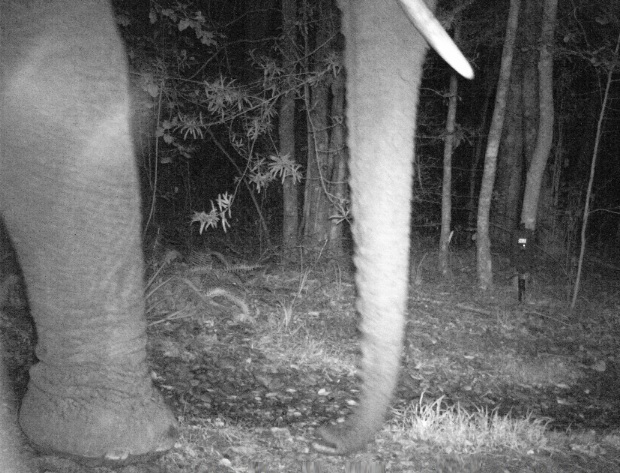 Green NGO Landmark Foundation recently took some rare photos of an elusive elephant in the Knysna forest, while researching the leopard population status in the Garden Route.

The Landmark Foundation works on carnivore conservation in the Eastern and Western Cape. Their main functions are research, rescue, education and extending wildlife friendly habitats. A signature project is the leopard and predator research project. One of the methods for capturing data is by setting camera trap stations to capture footage from either flank of the leopard so as to identify individuals. Currently one of their focus areas is the Garden Route.

The Landmark Foundation leopard research project has demonstrated that the species is locally critically endangered with less than 350 remaining as territorially dominant individuals in the Cape Fold Mountains and surrounding lowlands in the entire region (Western & Eastern Cape).

Furthermore it has been demonstrated that these individuals are further divided into isolated pockets of population ranging from as few as 8 individuals to larger populations 40, demonstrating early genetic bottlenecking. Their existence is constantly threatened by habitat destruction and human persecution, mostly due to conflict with livestock farmers, and other threats like poaching, hunting and being hit on roads.

These camera trap stations are strategically placed over a specific research area and along with leopards capture extremely interesting footage of a wide variety of animals. Genet, baboon, bushpig, porcupine, badger, otter, and a wide variety of antelope species have all been captured on the cameras along with the leopards.

Rare species such as blue duiker are sometimes captured, however on the last routine check-up, fresh evidence of elephant presence in the vicinity of one of the cameras was found. They had picked up rare footage of one elusive “Knysna Elephant”! The elephant was photographed four times on two separate occasions at the same site between the 6th of November 2013 and on the 8th of January 2014.

Video footage made it possible to identify the sex of the elephant, and it is a female.

These elephants are known to frequent the forest, but due to pressure from the ivory hunts of the past, forest habitat destruction and the current genetic isolation of this small population, their numbers are extremely low.

Little is known of the exact number of elephants that remain and some of the evidence is disputed. They have very rarely been seen, let alone photographed. Some estimates suggest that only this single female remains, while others have suggested there are more are. It is suggested by some people that seven individuals may remain, however only one has been documented using photographic footage.

The Landmark Foundation would like to take this opportunity to thank everyone  involved in the project. Without the support from landowners and our sponsors and supporters rare and important findings such as this one would not be possible.