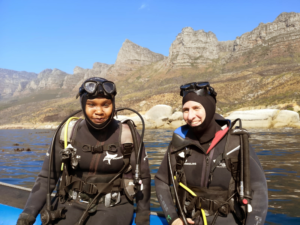 Recently the Wild Oceans Research Vessel, RV Angra Pequena, carrying a team of researchers and marine students, set sail to Protea Banks on the south coast of KwaZulu-Natal in order to retrieve telemetry receivers previously deployed in the area. The retrieval of these receivers will give us the ability to investigate the movements of tagged sharks and highlight the importance of canyon heads as critical shark habitat.

These receivers (or listening stations) pick up and record unique signals from acoustic tags inserted onto tagged fish and sharks and allow researchers to track the movement patterns of these species.

These acoustic listening devices were deployed from RV Angra Pequena in July 2018 at 80-90m depths at the head of each of the three big submarine canyons that lie seaward of behind the Protea Banks reef system, within the newly announced marine protected area (MPA). These devices are part of a national Acoustic Telemetry Array Platform (ATAP) that is managed by the South African Institute for Aquatic Biodiversity (SAIAB) and is made up of a network of acoustic receivers that are strategically deployed at stations all along the coast.

Dr Jean Harris, Executive Director of Wild Oceans, said that this study is the first of its kind in South Africa and one of only a few worldwide. “The aim is to study the movement of sharks along the KwaZulu-Natal coast. This part of the project that is led by Dr Matt Dicken of the KwaZulu-Natal Sharks Board, aims to understand the importance of canyon heads as critical habitat for sharks, especially species such as Tiger, Ragged-tooth and Zambezi.” 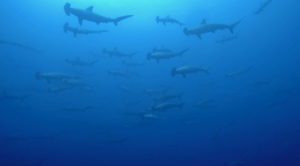 Dr Jean Harris added, “We are especially interested in understanding the role submarine canyons play as productive nodes in the seascape and the connectivity with shallower inshore habitats. The receivers that we retrieved and replaced are deeper in 80-90m of water at canyon heads. Due to the depth of these sites, the receivers have acoustic releases, which can be remotely activated from the surface by a boat.”

In December 2018 and January 2019, Wild Oceans undertook a Scalloped Hammerhead shark survey in Protea Banks. “As this species has only been tagged in Mozambique to date, if we picked up any signals for this species on our receivers this would show that there is a connection between sites in Mozambique and this big aggregation in southern KZN, and that the sharks are moving between them”, said Dr Jean Harris, expressing that the team would be excited if they were recorded on the Protea Banks receivers.

Tembisa Jordaan, Scientist from Ezemvelo KZN Wildlife who observed the telemetry retrieval, said that a very special and massive shark aggregation event has been reported by divers and dive operators in the area of which there is very little research of. She feels it is important for scientists to collect as much data as possible to confirm and document such activity and conduct further research to add to the long list of reasons why areas like Protea Banks are special. Protea Banks was recently announced as one of the new 20 MPAs.

“As an organisation that is mandated to protect KZN’s natural environment, it’s critical for Ezemvelo to be central to such studies so that we’re able to make note of any new findings that are made especially around MPAs because we are going to be delegated the responsibility of maintaining the MPAs and applying the objectives and whatever management plan that arises,” said Jordaan. 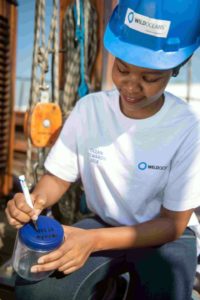 Youth for MPAs representative and Ocean Steward Jamila Janna, whose role on the expedition was to help spot the buoys attached to the equipment when it surfaced, said that she really enjoyed being exposed to different people and seeing how diverse a field can get. “Seeing how many components there are to marine biology and also just spreading the message of conservation -it’s fun and I just love learning. I really like experiences like this and love this kind of work.”

This mission was part of the “Canyon Connections” project, funded by the National Research Foundation through the African Coelacanth Ecosystem Programme (ACEP) which is managed by the South African Institute of Aquatic Biodiversity (SAIAB).

This Telemetry research was filmed and is set to feature in a marine documentary series called ‘Our Oceans’ a co-production between Wild Oceans and Off the Fence, a world class production company, set to be released mid- 2019. The ‘Our Oceans’ marine documentary series (and feature film) will profile marine expeditions on board the RV Angra Pequena, raising awareness and knowledge about KwaZulu-Natal’s spectacular marine ecosystems, charismatic animals and profiling the learning journey of the scientists and Ocean Stewards on-board the vessel, as well as offer insights from communities along the coastline.