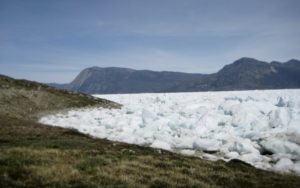 Kangersuneq glacial ice fields in Kapissisillit, Greenland. Milder weather than normal since the start of summer led to the UN’s weather agency voicing concern that the hot air which produced the recent extreme heat wave in Europe could be headed toward Greenland where it could contribute to increased melting of ice. Image: Keith Virgo / Associated Press

Many of the globe’s far northern regions have been experiencing extreme weather events over the past two months. Plumes of smoke have been picked up by satellites from wildfires across Alaska and Siberia and Greenland has experienced rapid ice loss as usually frigid regions have experienced heatwaves and record temperatures.

As the Arctic faces extreme weather events caused by climate change, the events could have ripple effects that accelerate temperature increases across the world, according to scientists and experts.

“The basic chemistry and the basic physics of how the atmosphere absorbs heat — there’s no path where you can imagine that the Arctic is going to start to cool off again,” says Brian Brettschneider, a climatologist and post doctoral fellow at the International Arctic Research Center at the University of Alaska Fairbanks.

“Cold air has to come from somewhere, cold air doesn’t just magically appear, and that somewhere has to be accounted for in the entire energy balance of the Earth. Right now the whole Earth has just warmed up,” Brettschneider tells TIME. “It would take a dramatic reversal of the chemical composition of the atmosphere.”

In Alaska, 2.4 million acres of wildfire have burned through July. In the northern Russian province of Siberia, more than 7 million acres have burned. Greenland has also seen several wildfires in July, but the largest threat to Greenland is a heatwave that spread from Europe to the Arctic country, causing 197 billion tons of ice melt in July alone.