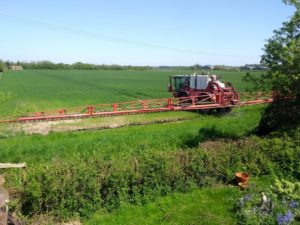 Despite the fact that we are in the midst of the biggest public health crisis for a century with the Covid-19 pandemic – and all the mass deaths and horrifying devastation it is causing – the UK government is forging ahead trying to force through various crucial pieces of legislation.

One of those pieces of legislation is the Agriculture Bill which was debated and voted on last month in the House of Commons, and is due to be debated in the House of Lords this week.

Yet with the absolute focus and priority for Parliamentarians being – understandably at this time – on the Covid-19 pandemic then the timing of such an important Bill will undoubtedly result in far more limited opportunities and abilities for scrutiny and challenge than there would usually be and indeed that certainly appeared to be the case when before the Commons.

On May 13th MPs voted through the Agriculture Bill largely unchanged. There had been many amendments on various issues tabled by MPs to the Bill, but due to the limited abilities of the remote voting system then only 3 non-Government amendments went to an actual vote.

This was incredibly frustrating as although a crucial amendment – tabled by Green MP Caroline Lucas – for public health protection from pesticides (Amendment number NC5 entitled “Application of pesticides: limitation on use to protect human health”) had been selected by the speaker to be debated and voted on, it just missed out on going to a vote in the final few minutes. Although it was highly unlikely to have passed anyway due to the Tory majority, it still would have been good to have had on record who voted for it and who didn’t.

It was also striking that apart from Caroline Lucas who spoke in the debate about the risks and harm from pesticides to human health, wildlife and the environment, and MP Kerry McCarthy who pulled no punches when referring to these agro-chemicals as “toxic pesticides”, no other MP during the 4 hour debate – except the DEFRA Minister Victoria Prentis who responded very briefly on pesticides – made any reference at all to these poisons.

Yet pesticides remain the biggest contributor of damage, pollution, and contamination of the air, soil, water and overall environment in rural areas, as well as damaging to human health.

The fact that the Agriculture Bill does not contain any specific requirements regarding the use of agricultural pesticides says it all really. It also means that much of the perceived benefits of the new Bill simply will not materialise if the Government continues to permit the release of cocktails of pesticides and other harmful agro-chemicals over the majority of UK land.

Agriculture now accounts for more than 70% of land use in the UK, and has a major influence on our health and environment. Considering that currently only around 3% of farmland in the UK is organic, then the vast majority of the 70% of land that is used in the UK for agriculture will be land that is regularly sprayed with pesticides under the existing ‘conventional’ – and highly chemically intensive – food and farming production system.

DEFRA’s own then Chief Scientist Advisor, Prof Ian Boyd, in an article in ‘Science’ in 2017 issued a damning assessment of the regulatory approach worldwide for pesticides sprayed on crops including that the impacts of “dosing whole landscapes” has been ignored; and that the assumption by regulators that it is “safe” to use pesticides at industrial scales across landscapes “is false” and must change. He has since repeatedly advocated that pesticides need to be designed out of farming systems. When I highlighted this comment at a meeting in 2018 with DEFRA Minister George Eustice he said he agreed with that position (not that that has been reflected of course in any way, shape or form in the Agriculture Bill in its current form!)

Whilst operators generally have protection when using agricultural pesticides – such as use of personal protective equipment (PPE), respirators, and will be in filtered cabs – rural residents and communities have had absolutely no protection at all. (Indeed this has been the case for well over seven decades, as synthetic chemical pesticides have been used in UK farming for around 75 years and have become increasingly relied upon by conventional farmers).

It is now beyond dispute that agricultural pesticides can cause a wide range of both acute and chronic adverse health impacts. This includes irreversible and permanent chronic effects.

Cornell University’s teaching module Toxicity of Pesticides clearly states that, “Pesticides can: cause deformities in unborn offspring (teratogenic effects), cause cancer (carcinogenic effects), cause mutations (mutagenic effects), poison the nervous system (neurotoxicity), or block the natural defenses of the immune system (immunotoxicity).” It goes on to warn that “Irreversible effects are permanent and cannot be changed once they have occurred. Injury to the nervous system is usually irreversible since its cells cannot divide and be replaced. Irreversible effects include birth defects, mutations, and cancer.”

Indeed the dangers of pesticides can clearly be seen on the manufacturers product data sheets themselves that carry various warnings such as “Very toxic by inhalation,” “Do not breathe spray; fumes; vapour,” “Risk of serious damage to eyes,” “Harmful, possible risk of irreversible effects through inhalation,” “May cause cancer by inhalation,” and even “May be fatal if inhaled.”

Considering that the warnings contained in such manufacturers’ product data sheets are for individual products then that is even before accounting for all the untested cocktails of pesticides sprayed widely on crops, and mixtures can increase the toxicity even further still.

A number of recent major international reports have also detailed the damage to human health from the existing industrial and chemical-intensive conventional farming systems:

Over 11,000 people – the majority of which are affected UK residents – have signed an ongoing petition calling on the Prime Minister and DEFRA Secretary to urgently secure the protection of rural residents and communities by prohibiting all crop spraying and use of any pesticides near residents’ homes, schools, and children’s playgrounds, amongst other areas.

This must be in substantial distances, as small buffer zones simply will not be adequate to protect anyone considering how far pesticides are known to travel. For example, scientific studies have found pesticides miles away from where they were originally applied and calculated health risks for rural residents and communities living within those distances.

The petition has been signed by a number of prominent figures including Hillsborough QC Michael Mansfield, the Prime Minister’s own father Stanley Johnson, Jonathon Porritt, Gordon Roddick, DEFRA non-executive board member Ben Goldsmith, amongst others.

The NC5 amendment that was before MPs last month provided for the exact same protection as called for in the petition, as it related to prohibiting the application of any pesticide for the purpose of agriculture near – (a) any building used for habitation, (b) any building or open space used for work or recreation, or (c) any public or private building where members of the public may be present including, but not limited to, schools, nurseries, and hospitals.

Rural residents have actually been legally defined as a vulnerable group in pesticide laws since 2009. Further still, rural residents and communities will obviously include other vulnerable sub-groups such as babies, children, pregnant women, the elderly, those already ill and/or disabled, among other vulnerable groups – none of whom should ever have been exposed to cocktails of these highly toxic chemicals in the first place!

The overriding duty of the Government is supposed to be the protection of citizen’s health and lives, especially those most vulnerable. Yet all the policy decisions on pesticides have, to date, always placed economic and financial interests and considerations as the primary focus.

Indeed such is the Government’s willingness to protect pesticide companies that despite it being a sector worth billions it was revealed last week that pesticide giants BASF and Bayer have been given enormous payouts of Covid-19 support cash from the UK Government.

If handing over £1.6 billion of taxpayers money to these major pesticide companies wasn’t bad enough, it comes just weeks after Bayer shareholders voted to pay £2.75 billion in dividends. The fact that Bayer then went on to receive £600 million from the Government is absolutely disgraceful and yet again speaks volumes of where the Government’s priorities lie.

The considerable harm agricultural pesticides are already known to be causing to both people and planet is unarguable. Considering such widespread damage then the strategic aim must be to move away from chemical pesticides to a health and environmentally sustainable crop protection using non-chemical methods. After all, the origins of traditional farming methods did not include dependence on chemical inputs for mass production. Such poisons should never have had any place in the air we breathe, food we eat, and the environment we live in.

Such a paradigm shift away from the use of synthetic pesticides in farming is absolutely integral to the health and existence of all those living in the British countryside, as well as other species that are being rapidly wiped out from the continued use of such toxic chemicals.

The new Agriculture Bill and policy provides a real opportunity for the UK to clean up agriculture once and for all and adopt a non-chemical farming policy in order to no longer use such poisons in the production of food. This would then protect not only the health of rural residents and communities, but also the environment, wildlife, pollinators, and other species.

All eyes will now be on the House of Lords that will be debating the Agriculture Bill on Wednesday. A number of peers have already previously and repeatedly raised serious concerns over the use of pesticides in our food and farming systems including the Green Party’s Baroness Jones of Moulsecoomb and  Baroness Bennett of Manor Castle, as well as the former food and farming Minister in the Labour Government the Rt Hon. Lord Whitty.

Also the recent new addition to the Lords – and former long standing editor of the Ecologist – Zac Goldsmith (or The Rt Hon Lord Goldsmith of Richmond Park as he is now known) and indeed when an MP, Lord Goldsmith had actually signed up to the crucial aforementioned amendment for the protection of rural residents and communities from agricultural pesticides.

Rural residents across the UK will be hoping the House of Lords acts strongly on this issue.

MPs failed to protect us from toxic pesticides – now we must put our faith in the Lords!

Georgina Downs is a journalist and campaigner. She runs the UK Pesticides Campaign, which specifically represents rural residents affected by pesticides sprayed in the locality of residents’ homes, as well as schools, playgrounds, among other areas.