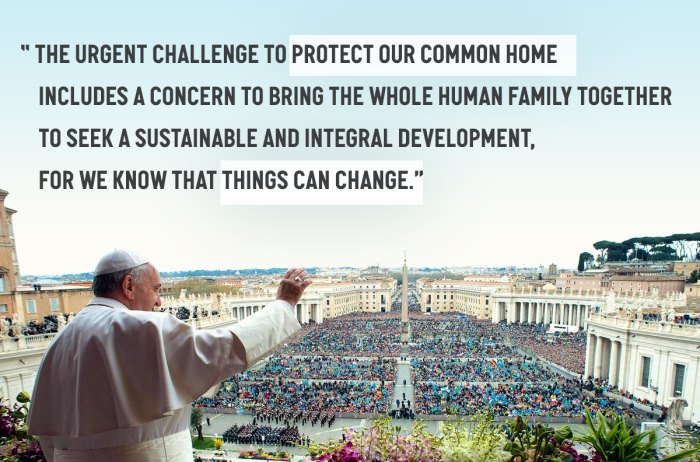 “Greenpeace welcomes the valuable intervention of Pope Francis in humanity’s common struggle to prevent catastrophic climate change. This first encyclical on the environment brings the world a step closer to that tipping point where we abandon fossil fuels and fully embrace clean renewable energy for all, by the middle of the century. Everyone, whether religious or secular, can and must respond to this exceptional call for bold urgent action.”

Environment is a public good – heritage and responsibility of all

“As the Encyclical states, the environment is a public good, the heritage of all humanity and the responsibility of us all. Greenpeace has always taken that view. That’s why we campaign for a just transition away from coal and towards renewable energy and energy efficiency in South Africa.

“The wording that ‘technology based on fossil fuels, highly polluting – especially coal, but also oil and, to a lesser extent, gas – must be progressively replaced and without delay’ is a crystal-clear call on responsible investors, CEOs and political leaders to step up the pace of the clean energy revolution.

“The criticism of ‘those who hold most of the resources and economic or political power seeming to be concerned mainly in masking the problems or hiding the symptoms … of climate change’ is a welcome rebuke to climate change deniers and the interests that seek to thwart progress. That dirty game must end now.

Above all, Pope Francis reminds all of us, individuals through to world leaders, of the moral imperative to address social and climate injustice. It is the poor who are most affected by catastrophic climate change, yet they have contributed least to causing the problem.”

“The Encyclical makes it clear that climate change represents one of the principal challenges facing humanity in our day, and as such, urgent action to shift away from fossil fuels is required. South Africa’s coal addiction has meant that despite some growth in renewable energy, almost 90% of this country’s electricity comes from coal, which is one of the main drivers of climate change. Nothing less than a just transition away from coal and towards renewable energy and energy efficiency will suffice.”

“The Pope’s words are exceptional, not because anything he is saying is particularly new, but because by taking this clear stand, Pope Francis is showing the kind of climate leadership that is so lacking from governments around the world. The South African government must follow his lead, and must start to shift new investments into renewable energy instead of coal.”

Finally, we hope that the Vatican Bank will join the growing movement which is divesting from coal, oil and dangerous nuclear power and support renewables, in keeping with the Pope’s words. And we look forward to the Church’s support for an energy revolution at local level as well. 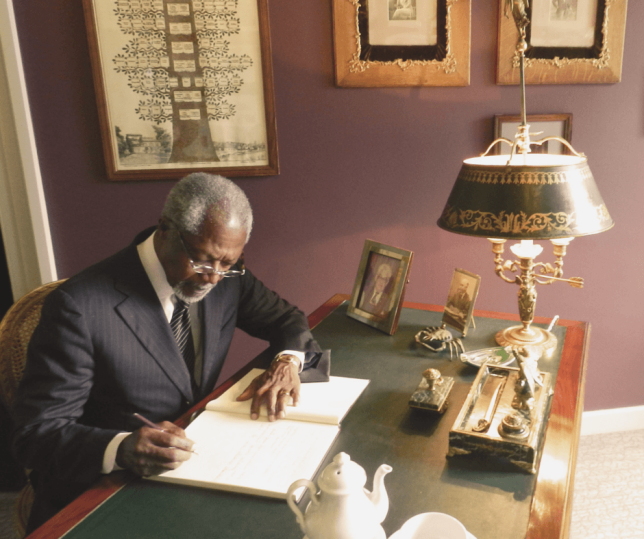 Kofi Annan said this in support of Pope Francis’s Encyclical:

“As Pope Francis reaffirms, climate change is an all-encompassing threat: it is a threat to our security, our health, and our sources of fresh water and food. Such conditions could displace tens of millions of people, dwarfing current migration and fuelling further conflicts. I applaud the Pope for his strong moral and ethical leadership. We need more of such inspired leadership. Will we see it at the climate summit in Paris?”

To prevent catastrophy we need ethical and aconomic shift

The Vatican’s stance couldn’t be clearer: climate change impacts us all, especially the poor. And to prevent its catastrophic consequences we need an ethical and economic shift, a revolution in hearts and minds. Pope Francis’s encyclical letter puts the link between climate change and human activity centre stage at a crucial moment for the climate movement:

“Humanity is called to create awareness of the need to change styles of life, production and consumption, to combat this warming or, at least, the human causes that produce or accentuate it.”

With this extraordinary call to safeguard the earth and mankind’s common good, it’s time for faith leaders across the planet to add their voice to the chorus calling for climate action. And this can start with your own community:

Historic faith-led call to action for millions to stand together

Pope Francis has now joined a chorus of faith groups, businesses, and government leaders who recognize that climate change is a massive threat to our planet and its people. We need all voices speaking out about the moral urgency of climate action to help push world leaders for a transition from burning the fossil fuels responsible for fuelling the climate madness we’re experiencing.

The encyclical is an historic, faith-led call to action for millions to stand together against climate change — a moral issue we can’t ignore. The more voices in the chorus, the stronger the signal we’ll send to government leaders meeting in Paris later this year to set a climate agreement.