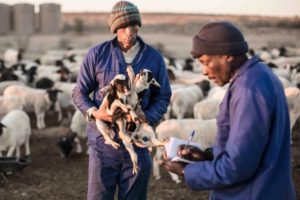 The Karoo, in South Africa, is a harsh environment in which to make a living out of agriculture—the area is mostly devoid of surface water. Its name is derived from the Khoisan word meaning “land of thirst”.

The land was traditionally used by pastoralists but drought, overgrazing and predation by wild animals made this activity precarious. Predators were kept in check by fencing, traps, poisons and hunting. South Africa is one of the most fenced places on Earth, with huge impacts on biodiversity and animal movements.

Now, a new pilot initiative covering about 25,000 hectares and using shepherds, has succeeded in increasing production of rangeland lamb and beef while simultaneously restoring vegetation and fostering biodiversity.

Fair Game is a partnership between the Landmark Foundation, the National Department of Environmental Affairs and the UN Environment Programme, funded by the Global Environment Facility, the Development Bank of South Africa and a local philanthropist. It is unique in using human herders on large commercial livestock farms.

One of the shepherds’ tasks is to set up portable kraals, or livestock enclosures, to protect sheep and cattle from predators, predominantly black-backed jackal and caracal.

The kraals, made of cargo netting held up by metal stakes, are established in highly degraded areas and are used at night. Nutrients from animal excrement and hoof action breaking up the surface in the kraals help restore degraded land. To prevent overgrazing during the day, the kraals are moved every week. 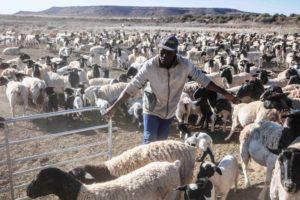 “In the presence of shepherds and kraaling for the last 30 months, despite a severe regional drought, livestock numbers have increased from 1,000 ewes to 2,000 sheep, and from 250 to 360 cattle,” says Bool Smuts, environmental manager, medical doctor and director of the Landmark Foundation.

“Within this same period there have been no recorded stock losses attributed to predators, effectively eliminating human/predator conflict. During the recent severe drought we were able to maintain the condition of the livestock and veld [field] and also minimized feed supplementation,” he adds.

A biodiversity consequence of shepherding has been that free-roaming predators have established territories and hunt their natural prey without targeting livestock. And a management and flock health benefit of shepherding is the daily audit and monitoring of livestock which permits early diagnosis of injury and disease. While weaning success of sheep was around 70 per cent prior to human herding, this has now increased dramatically, says Smuts.

“We wanted to implement an alternative livestock husbandry model that addresses overgrazing, desertification and negative biodiversity impacts and excludes lethal predator control, and we’ve drawn on more than a decade of Landmark Foundation’s leopard research and small predator livestock conflict studies,” he adds. 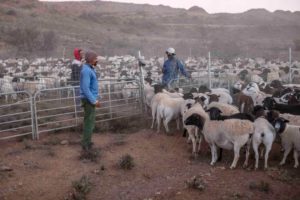 Herders work a six-day cycle: two 24-hour shifts, two 8-hour shifts with 48 hours off. They are paid 70 per cent above the ordinary farm labour wage and their jobs are seen as elevated positions on the farms.

“The Fair Game farms have helped prevent veld degradation and also enhanced drought resistance which has allowed Fair Game farmers not only to increase livestock numbers during the drought, but also sell lambs and cattle at premium prices,” says UN Environment Global Environment Facility Task Manager Jane Nimpamya. “The project is replicable in other dryland areas where predation is a problem for livestock farmers,” she adds.

In May 2019 Landmark Foundation’s Shepherding Back Biodiversity Project (of which Fair Game is a part) was recognized in the annual Eco-Logic Awards for providing services that support and protect the planet. 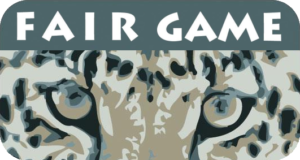