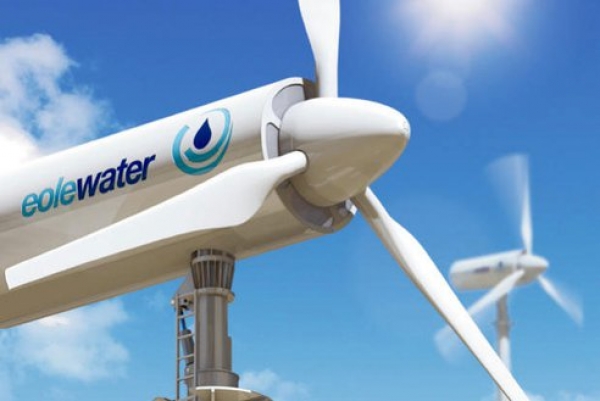 A cool new concept being tested in the Abu Dhabi desert uses a wind turbine to condense water from the air and pump it into storage tanks for filtration and purification. The technology was created by Eole Water after its founder, Marc Parent, was inspired by the water he could collect from his air conditioner unit while living in the Caribbean. He began thinking of ways that water could be condensed from air in areas without access to grid power and the wind turbine concept was born.

The 30-kW wind turbine houses and powers the whole system. Air is taken in through vents in the nose cone of the turbine and then heated by a generator to make steam. The steam goes through a cooling compressor that creates moisture, which is then condensed and collected. The water produced is sent through pipes down to stainless steel storage tanks where it’s filtered and purified.

A prototype of the technology has been installed in Abu Dhabi since October and has been capable of producing 500 to 800 liters of clean water a day from the dry desert air. Eole Water says that volume can increase to 1,000 litres a day with a tower-top system. The system requires wind speeds of 15 miles (24km) per hour or higher to produce water.

This technology uses a simple process that has been experimented with in a variety of designs, but this is the first powered by a wind turbine. That component makes it able to produce large quantities of clean water in areas that don’t have ready access to it without requiring grid power, which makes it especially promising for remote communities and disaster areas. Eole has already landed 12 industrial partners for manufacturing the turbines.