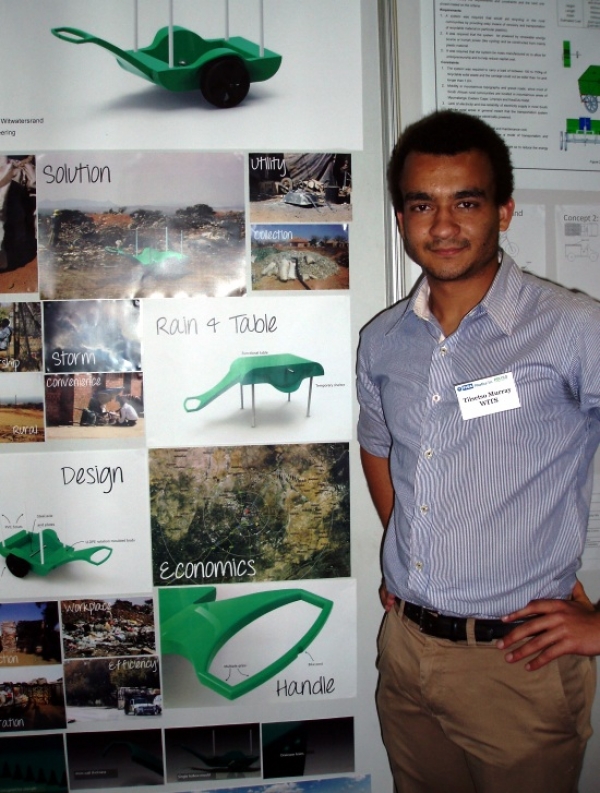 Tiitseko Murray of Wits University with his poster about the recycling trailer (WITS).

The Plastics Institute of South Africa (PISA) has announced the winners of the Student Design Competition, held in partnership with POLYCO (the industry association promoting the recycling of polyolefin plastics in South Africa), Plastics|SA, Afrimold and the Universities of the Witwatersrand (Wits), Johannesburg (UJ) and Tshwane University of Technology (TUT).

Addressing the 21 finalists and winners at the prize giving ceremony at the Afrimold Expo at Gallagher Estate in Midrand, Plastics|SA Sustainability Director Douw Steyn, explained that the objective of the design competition was to design the most innovative and practical trolley that could be pulled behind a bicycle for the collection of recyclables.

“The collection of post-consumer recyclables from households has become a daily occurrence in our streets and neighbourhoods. Our latest plastics recycling survey has shown that 40 950 informal jobs were created during 2010-2011 in the collection industry, with an average of 60 kgs collected per person per day.”

Sam Matsemela, a collector himself and Chairperson of the Trolley Brigade – an informal organization formed to represent collectors in negotiations with municipalities and other organisations – addressed the organisers and students and was visibly moved by their efforts to make the lives of these workers that much easier.

He explained: “When Douw Steyn spoke about this competition 6 months ago, I thought it was just talk, but here I stand before you, a judge at the competition and my heart overflowing with pride and joy! Fellow citizens will now become more aware of our contribution to their daily lives and at the same time we will be able to lead meaningful lives and earn a living.”

Steyn explained that the role players in the plastics industry were very supportive of the competition and that they had not hesitated to donate products ranging from plastic pipes to polystyrene for the students to use in their designs.

thinking outside the box

“We wanted the students to think ‘outside the box’ and incorporate as much recycled or recyclable material into their designs as possible. At the same time, the entries needed to be practical, cost effective, easy to build and operate and aesthetically pleasing,” he said.

The judges, who were tasked with the difficult job of assessing and adjudicating the entries, were selected from the plastics and recycling industries and chosen because of their first-hand knowledge of the daily challenges faced by the collectors.

The judges made it clear that they were very impressed with the standard of the entries.

“It was very difficult to choose a winner, as each and every design was a winner in its own right”, said judge and CEO of the Packaging Council of South Africa (PACSA), Andrew Marthinusen.

And the winners are…

Concludes Steyn: “I believe this competition has proved that there is a workable solution for waste collection in our country and we hope to see industry and local municipalities working together in the near future to make one of these designs become a reality for Sam and the other collectors.”