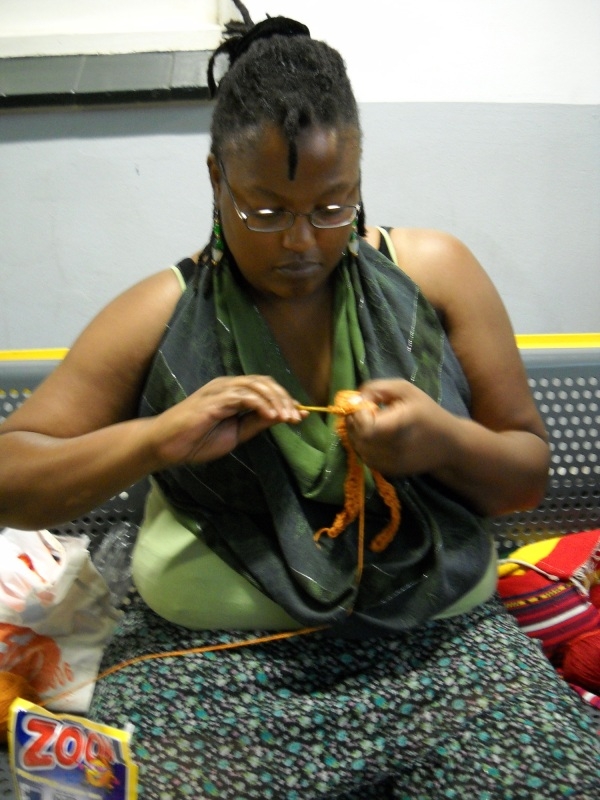 On its travels through South Africa the Climate Train has been creating unique spaces for community members – notables and ordinary people alike- to engage in meaningful discussions around climate change and the lively Pretoria was certainly no exception.

Climate’s impact on corals and hundreds of species

In the cool Sunday afternoon with the smell of the unexpected Highveld thunderstorms still fresh in the air, a small group of ladies congregated on the platform, chatting and crafting away, exchanging ideas, patterns, yarns and environmental information.

Having no immediate connection to the ocean, much less coral reefs, WARP, a satellite of the worldwide Hyperbolic Crochet Coral Reef Project, engaged the Pretoria residents in conversations around the impacts of climate change on coral reefs and the hundreds of species who depend on it, through crocheting.

This initiative started when founders Margaret and Christine Wertheim of the Institute For Figuring noticing that the crocheted models resembled corals, nudibranchs and other ‘frilly’ marine life forms. So started the first crocheted coral reef, which has since turned into a global awareness project.

Encompassingmathematics, marine biology and environmental activism, the project refers to the fragility of ecosystems, the threat that global warming and CO2 emissions pose to the ocean’s living coral reefs and draws attention to the effects of global warming on ecosystems and its living practices.

Amongst the group was a musician artist from Johannesburg, KhethiNtshangase. With environmental issues close to her heart, Khethi was curious to experience the train and be a part of the build up to COP17.

“I was invited by a friend to visit the train and I am so glad that I came, because I would never have known about the impact climate change poses to coral reefs and marine life. Crocheting is such an interesting way to get people involved and engaged in conversations. It was very refreshing to just get an opportunity to be able to talk to different people and expand one’s knowledge. I think it is also a creative way to bring the issue around coral reefs closer to home, even though we have no direct access to the ocean. It’s like we’re weaving words,” she said.

Green is a mind-set

Tribute Mbaweni from Pretoria said the highlight of her day was the engagement. Wearing a T-shirt with the phrase ‘Green is more than a colour, its mind-set’ she said: “I was expecting a long talk about climate change, but instead I experienced beautiful conversations with these women. One might think that crocheting is irrelevant, but today I learnt how everything on Earth is interconnected. Coral reefs and its living eco-systems is no longer an isolated topic for me. People who live in the in-lands such as Pretoria and Johannesburg are of the opinion that it doesn’t affect them, so there is still a lot of education and awareness to be done. Today’s experience helped me to appreciate the things that I can’t see. It was very intriguing,” she added while crocheting. 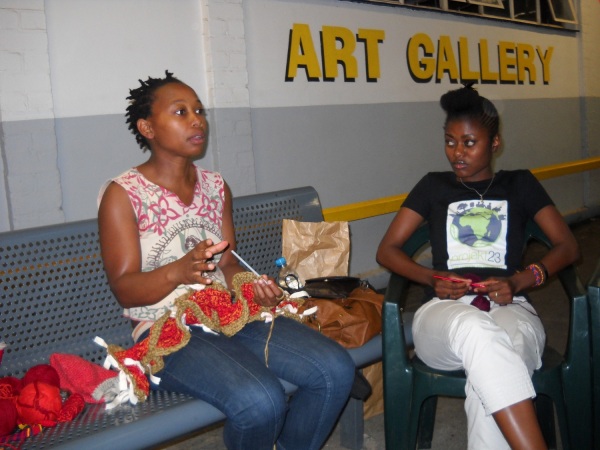 With the help of Zola Ndimande, members of Warp the women worked together with ease.

“We like to look at it as a celebration of coral reefs. Millions of reefs are dying because of climate change and it’s important to create this awareness and spread the message. There is often no connection with coral reefs, because we can’t see them, but once people get involved and start seeing the form of the coral while crocheting, they begin to understand. The free flowing interaction and engagement is just so refreshing and really opens our project to so much more,” Zola explained.

What started off as an adventure ended up as a dedicated labour of love and soon the four new corals were completed.

The crochet coral reef will be exhibited at COP17 in Durban.