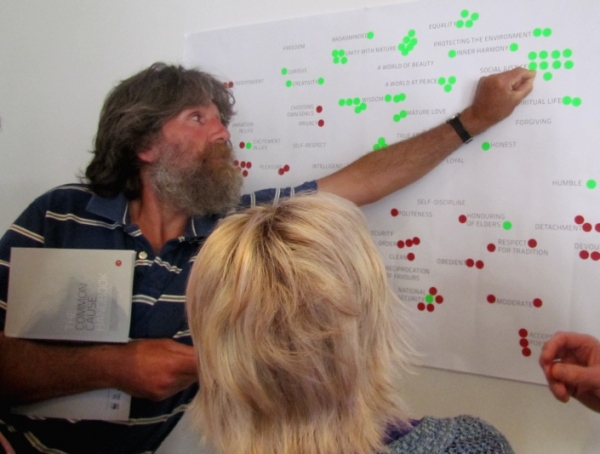 The workshop was presented in a unique “U process”. This consisted of a step by step method which started on the left side of a U shape, and ended on the far right. The first step was “sensing”. This was basically a process of everyone getting to know one another, and developing a solid understanding of the concept of food security, and how urbanization and migration affect this issue.

We spent the first day completing this step. First, we were asked to split into pairs and (with someone we do not know) and discuss whether or not we thought that the workshop would work. One person would play the “cynic” and the other would be the “believer”.

I played the “cynic”, so I was tasked with completing the sentence “This workshop will not work because…” Kate Dobson, a research student from U.S.A. was the “optimist”, and she seemed to have a better understanding of the topic than I did, which made it difficult to argue with her. After about 15 minutes of this, Roger drew up a list for both the negative and positive points that had arisen out of the conversation, and everyone was asked to call out points to add to the list. In the end it was clear that there were good points for each argument, but the point of the exercise was to show the group that there are cynics and believers in all of us, and that being hopeful is a matter of choice.

After this we were given a presentation by Godfrey Tawodzera, the AFSUN Post-Doctoral Fellow in the African Centre for Cities at University of Cape Town. He spoke about urbanization, and the fact that urban centres are the new development frontier. He also explained that poor people are no longer moving to city centres simply to make more money, but as a last resort for survival. Many people are moving into city centres because they have no other choice. He also spoke about our ecological footprint, and questioned whether or not people are doing all that they can go improve the situation. AFSUN was created to answer these questions. Godfrey told us about the extensive surveys that they have done with regards to food security. One of the findings of their door to door surveys was that They also found that only The following issues emerged out of AFSUN’s studies:

Godfrey also made it clear that AFSUN does not have all the answers, but that they are on a mission to share what they do know, and to listen to what they do not know.

Another thing that Godfrey mentioned, which was found in a different AFSUN study, was that the average household income in Harare, Zimbabwe, is R700, of which R500 is spent on food. They spoke to some locals about this situation and what they have been doing to combat it, and one of the possible solutions is community farming. However, this presented a number of problems. Some community members were not committed enough to the community farm for it to be fair for the produce to be split equally in the end. Some of them were only present when the crops were planted and then only appeared again when they were ready to be harvested. This caused conflict in the community, which created even more problems.

After this presentation we were separated into groups of three, in which I ended up with Godfrey Domingo, who was there to represent The City of Cape Town’s department of food security. It was interesting to hear that there are only two people in this department, when this is such a massive issue. He told me that most food security initiatives happen as a result of NGO groups, as opposed to government. He said that there is a ridiculous amount of red tape involved when it comes to trying to plant crops in public areas.

For example, he tried to arrange for fruit trees to be planted in a public park, but his plan was protested against by another department that wanted the park to stay open for children to play in. His argument was that children could still play there even if there are trees planted, but he was not allowed to proceed. Godfrey and I agreed that the only way that a real difference can be made, is if people really develop a proper understanding of the issue and work together to combat it. It doesn’t help if everyone is only concerned with their own wellbeing. 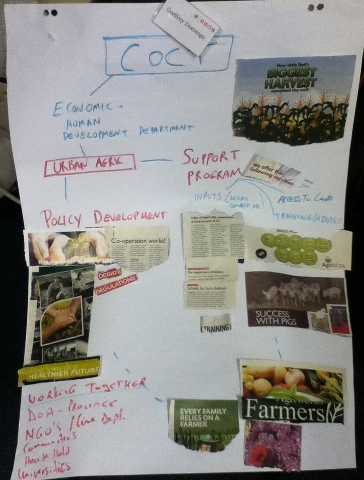 An interesting slide that Roger showed us, was a cartoon drawing of a man sitting next to a circular row of dominoes, with the first domino on his left and the last on his right. He is leaning on the domino on his left, which is slightly tilting over, and each domino is creating a bigger impact on the next, with the last domino in mid air, just about to crush the man. The point of this drawing was to demonstrate that a small action can have a massive reaction, and that it is necessary to think before you act.

“When we try to pick out any one thing by itself we find it hitched to just about everything in the universe.” 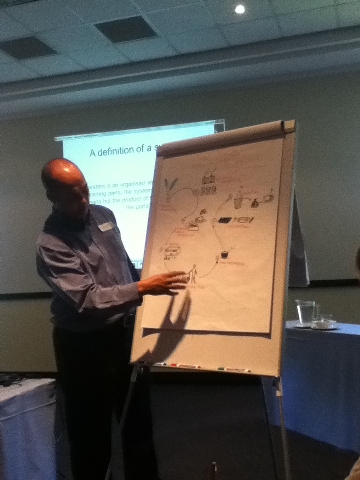 The definition of a system if “A set of things working together as parts of a mechanism or an interconnecting network”. Roger explained to us that there are three kinds of systems.

Roger used this explanation to demonstrate how dysfunction the current general system of food distribution is. He showed us a diagram of how this system works, and we concluded that this was not a closed system, as it did not have a loop. It would start on the one side, with food production, and then go through various phases before ending with disposal in either a landfill or in the sea. This system incurs far too much wastage, and each step incurs costs.

Where do we fit in?

After this demonstration, we were tasked with designing a collage that represents the system of our organization. This took a bit of explaining before everybody understood that they were being asked to something creative and fun. We were given an hour to make this collage, after which we were treated to a fantastic lunch.

When we returned from lunch, we had to present our systems collages to the rest of the guests, taking turns to walk around and be given a good explanation of how their system works. 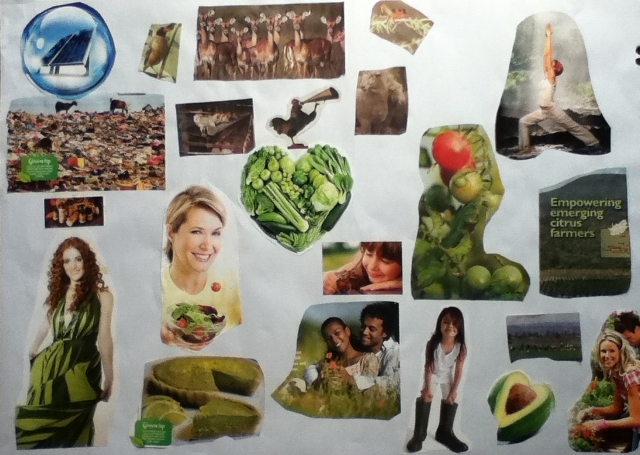 After we all developed a good understanding of all the systems in the room, we were asked to place our collage underneath the most relevant category within the food system (which had been mapped out on the wall in the meantime), so that we could see where we fit in. At the end of this exercise, it was interesting to note that the highest number of attendees’ systems ended up in the “production” category, and that absolutely no-one was in the “distribution” or “retail” categories. This raised the question as to whether or not these are the systems that need rethinking. 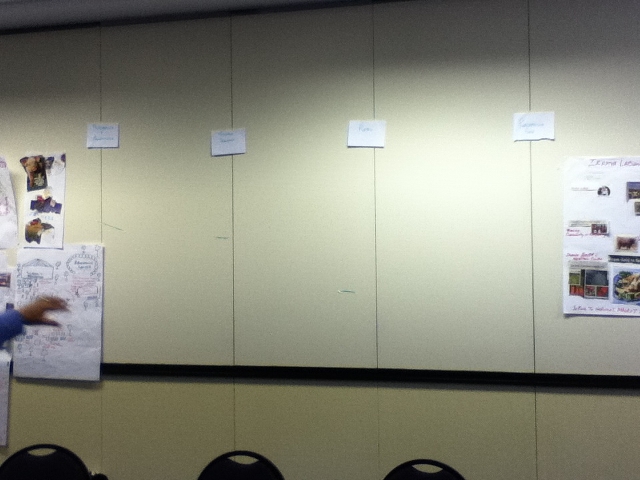 The last half an hour of the day was dedicated to Roger explaining to us about the systems that the group would be visiting the next day as “learning journeys”, which is the second step on the U plan. One of these systems would be SEED, a local food production NGO that teaches school children about growing their own food, as well as a variety of other initiatives. 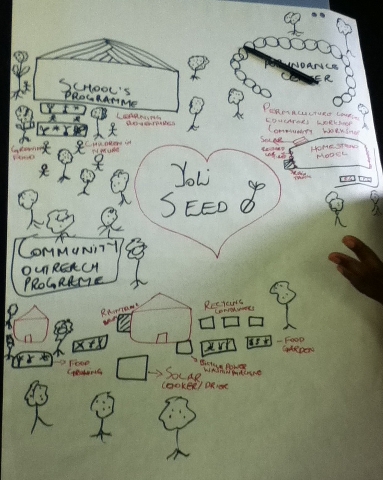