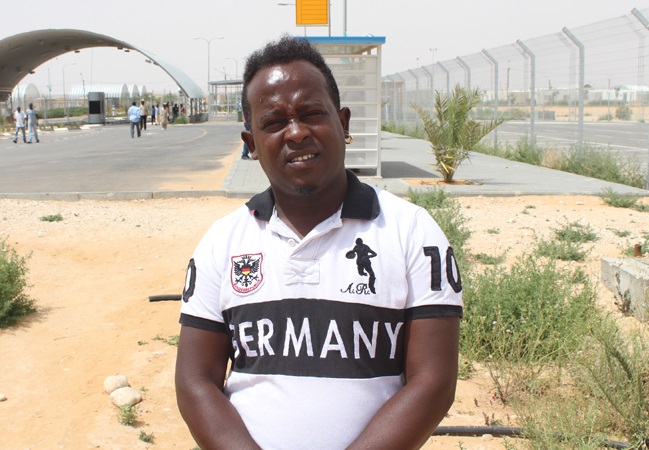 Today is World Refugee Day. Refugees mostly flee from violent situations – and most violence is linked to the scarcity of resources –  or hunger. Both could be linked to climate change and the scramble for   environmental support. Indeed this escalating trend is set to increase as changing climates place more and more pressure on our land and people to adapt to difficult circumstances.

Green Times went in search of local refugee stories. Sadly, they were not available, however, we have made contact with some groups and will be assiting in giving voice to local refugees, whose stories we need to hear and share.

No choice but to escape

Facing persecution or life-threatening violence in their homelands, Marwan Shoaib of Syria, Jeffrey Oboh of Nigeria, and Awet Asheber of Eritrea, had no choice but to escape. Each of the three men crossed hostile territories and unregulated borders in search of shelter, and a chance for a normal life.

Now they are asylum seekers, which is United Nations jargon for individuals whose claim for refugee status has not yet been determined. They are part of a growing group of displaced people worldwide.

A new report by the UN refugee agency – released on June 20, the UN’s World Refugee Day – shows 51.2 million people were forcibly displaced at the end of 2013, six million more than the 45.2 million reported a year earlier.

The lives of Shoaib, Oboh and Asheber are currently not in danger. They are in Sweden, Italy and Israel – countries that provide them with security and a promise not to be returned to their dangerous homelands. But their prospects for a normal life are far from assured. Their lives, like thousands of other asylum seekers worldwide, are dependent on the refugee policies and economic wellbeing of their host countries.

Shoaib, 57, who lived his entire life in Damascus, arrived in Sweden in the middle of May. He is staying at a lakeside resort in Skebobruk, a tiny town located 90km north of the capital Stockholm. The resort, normally a weekend getaway for wealthy Swedes, has been rented out by the Swedish Migration Board as temporary accommodation serving the surge of asylum seekers – some 30,000 in the first five months of 2014 – the country is seeing.

“I plan to get residency, find work and integrate into Swedish society, to create a better future for my children,” said Shoaib, well aware of the fact Sweden is the only country offering Syrian refugees permanent residency.

His family fled home after three years of war, when they finally lost hope that the situation would improve. His wife and two kids are waiting at a friend’s apartment in Istanbul, and other members of the family are in Beirut. Shoaib said he paid $10,000 to smugglers in order to get from the Syrian capital to Stockholm.

He had to leave his family behind because he did not have enough money to pay for smuggling them. He plans for his wife and kids to come to Sweden legally since the Swedish Migration Board permits family reunification to any Syrian that is granted refugee status. The average time for a decision on an asylum application in Sweden is currently 127 days.

While he waits, Shoaib is provided with medical services, accommodation – he shares a room with one other Syrian – and food, as well as an allowance of $3.60 per day. He is allowed to work, but his chances of finding a job are slim since he is staying in a small town and does not speak the local language.

“This society respects people,” he said of Swedish hospitality. “The accommodation here is good and the people are very nice, but I miss my family. If you are alone, even if you stay in heaven – you will not like it.”

While Shoaib had funds to secure passage to a country considered a role model for refugee reception, Oboh from Nigeria was not as lucky. The 25-year-old escaped his home after the hardline Islamist group Boko Haram attacked his village, killing his father and other family members.

Oboh, who is Christian, escaped to Libya. He worked several weeks at a car wash outside Tripoli, but then the Libyan police started mass arresting African migrants, and he was jailed.

He said he and several other Africans broke out of the prison. They were afraid to stay in Libya and decided to sail out on a small fishing boat to the Italian island of Lampedusa, about 300km away. They spent two days lost at sea before Italy’s navy found and brought them to Sicily.

“They are the ones that saved my soul,” Oboh said. “Without them, I don’t believe I would be alive today.”

He arrived in Italy in July 2013 and applied for asylum. Since then, he has been living in a centre set up by the Ministry of Interior to assist integration of asylum seekers. Dozens of such centres throughout the country serve a growing number of people entering Italy via the Mediterranean Sea.

Oboh’s centre, located in the Sicilian town of Giarre, hosts people from Nigeria, Senegal and Ethiopia. Three people sleep in each room. Aside from accommodations, the centres provide asylum seekers with food vouchers and legal assistance, as well as programmes for social and economic integration. Oboh receives a daily $2 allowance and uses it to pay for mobile internet service and basic clothing, but it is not enough to get the shoes he wants. He’s allowed to work while his asylum case is reviewed, but finding a job in Italy’s floundering labour market is nearly impossible for foreigners.

As an asylum seeker, Oboh can live only in the assigned government centre and his freedom of movement is limited. The average time for review of an asylum application in Italy is six to 12 months, according to the UN refugee agency. But 11 months have passed since Oboh arrived and he does not yet have a set date.

Many asylum seekers in Italy are stuck in a similar situation, and the backlog grows with every boat of migrants that rolls in. Oboh is frustrated because as long as he is not recognised as a refugee, he cannot build a new life for himself.

“If I was in Africa maybe I would not be alive,” Oboh said. “[Italy] is taking good care of us, giving us pocket money, but what we need is the refugee status document.”

And then there is Israel. Unlike Sweden and Italy, Israel – one of the first countries to ratify the 1951 Refugee Convention – has never adopted national refugee legislation, meaning there is no regulatory framework outlining the rights of asylum seekers and obligations of the state.

For Awet Asheber from Eritrea, the lack of clear, binding laws has meant living in limbo for more than six years – and counting.

Some 64,000 Africans – mostly from Eritrea and Sudan – entered Israel between 2007 and 2012, through the then fenceless border with Egypt. Last year, the border was barricaded, stopping the arrivals to a near halt.

Asheber, 34, came in 2008 and applied for asylum. At the time, Israel’s policy was to allow “tolerated stay” for Eritrean citizens. Their asylum claims were not evaluated on an individual basis but they were granted group protection, and they were not deported back to their dangerous homeland.

Asheber got a short-term visa, to be renewed every few months. He lived in Tel Aviv and got by doing random, low-paying, temporary jobs, even though officially he was not allowed to work.

In January, when he went to renew his visa, the immigration authorities ordered him to report to Holot, a newly constructed detention centre for what the Israeli government terms “infiltrators”. The 2,400 asylum seekers currently detained in Holot, which is located in the Negev desert, are not permitted to work and their freedom of movement is basically eliminated because they must sign in three times a day.

“We asked for asylum and they gave us prison,” said Asheber, standing outside Holot. “All I want is what every human being deserves, only what is written in the 1951 Refugee Convention. I am not a criminal. I came just because there is dictatorship in my country. I thought Israel is a democracy, but a real democracy does not give prison to people like me.”

Asheber gets an allowance of about $4.50 per day, as well as food and basic medical services. Those benefits are more than what most asylum seekers in Israel get. The estimated 45,000 Africans who have not been detained in Holot continue living – mostly in south Tel Aviv – on short-term visas, without any social benefits and with limited health assistance.

Asheber has no idea when he will be free again. The opening of the Holot detention centre is part of Israel’s deterrence policy. Binded by international law, it cannot deport Sudanese and Eritreans back to their countries. Instead, it is hoping to convince them to exit the country voluntarily.

Former Minister of Interior Eli Yishai was quoted as saying: “We will make the lives of infiltrators bitter until they leave.” Israel’s immigration authority offered Asheber $3,500 to leave the country but he declined. He is too afraid to go back to Eritrea and said he has nowhere else to go.

“Quick response, quick determination and a move towards integration are very good signs of a good asylum policy,” said Dawn Chatty, director of the Refugee Studies Centre at the University of Oxford.

Each country faces different challenges, Chatty said, so it is difficult to compare between asylum policies. She pointed out that Israel has the largest number of mixed migrants – a combination of people fleeing political upheaval and economic migrants – which makes the refugee determination process more challenging.

Italy’s asylum application backlog is understandable, she said, since it is facing an overwhelming migration flow as a result of the blocking of other routes to Europe. Sweden can afford a much more liberal policy because migration is neither massive nor mixed.

But Chatty said when it comes to asylum seekers, there are red lines for any country that should not be crossed.

“Detention is very arbitrary, it’s very cruel,” she said. “I think the whole principle of the detention centre is really from a different century. There are other ways of keeping track of people. We need to move forward.”