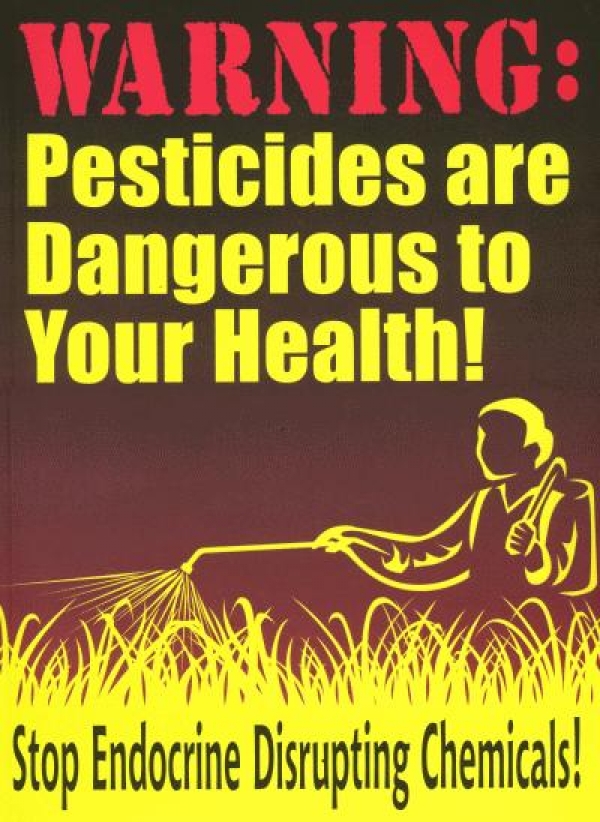 In our country the destructive effects of the World Wars are still prevailing, as was evidenced by the poisoning of innocent diners at the V&A Waterfront last week. To date at least 8 people have contacted Jurgen Schirmacher, chairman of TATIB (The Air That I Breathe) to complain about on-going illness since eating at outside tables at the Waterfront last week. A waterfront worker had sprayed a dangerous pesticide, Pyrinex 480 EC, which contains the active organophosphate ingredient chlorpyrifos in the area. Green Times spoke to a woman who is still ill in bed today, 16 August, more than a week later. There is no cure.

The dangers of pesticides to humans, our water resources and our ecology are still underestimated in South Africa. In the Governmet Gazette of 14 May 2010 the Minister of Agriculture, Forestry and Fishey, Tina Joemat-Petterson had published an announcement as regulation no R375, banning the use of this poison from use in home, home garden and domestic pest control use in South Africa.

‘The maintenance team at the V&A Waterfront used Pyrinex 480 EC, which was classified by the World Health Organisation and the National Department of Agriculture South Africa as a class 1b Highly Hazardous pesticide,’ said Jurgen Schirmacher, TATIB chairman.

‘Its active ingredient is Chlorpyrifos, which is an organophosphate nerve toxin that was developed during the Second World War to kill people.’

Chlorpyrifos is a toxic, crystalline organophosphate insecticide used to control insect pests. Chronic exposure has been linked to neurological effects, developmental disorders, and autoimmune disorders. A 2011 study on the neurotoxic effects of chlorpyrifos indicate that the pesticide may be involved in Gulf War Syndrome and other neurodegenerative disorders.

Recent research indicates that children exposed to chlorpyrifos while in the womb have an increased risk of delays in mental and motor development at age 3 and an increased occurrence of pervasive developmental disorders such as ADHD and autism.

‘Due to the fact that Chlorpyrifos is so toxic and dangerous to people, especially children, it was banned for all residential use in South Africa. It cannot be used in the home, the garden, in parks, public spaces, in or near schools – in other words it cannot be used where the public will come into contact with its toxic residues.’

According to Schirmacher, the spraying was done by the V&A maintenance team.

‘The man actually doing the spraying had only started working there that very day and had no clue as to what he was spraying and how toxic it was.’

Schirmacher believes that neither the sprayer, nor the maintenance department he works for are registered pesticide applicators under Act 36 of 1947.

‘This act controls the use of all agricultural ‘chemicals’ in South Africa. There are specific instructions on the Product Label that govern the way the product is to be used.’

‘He sprayed all over, on the plant boxes, pavements, parking lot and the entrances to shops, and around the Mugg & Bean eating area,’ Schirmacher said.

Several customers who were caught in the spray drift have complained of severe headaches and nausea.

Even a staff member of the Green Times was in the firing line. She ate at an outside table at the Waterfront on Tuesday evening – a day later.

‘Shortly afterwards we went to a show and I became severely thirsty. I drank a whole litre of water but nothing could quench the thirst. On the way home I started feeling very strange. I thought I was getting a migraine. Then, I thought it was a tummy bug, because it just did not pass – but after 3 days of a severe headache and vomiting, I knew, this was neither. It was only upon reading the newspaper on Saturday morning that I realized what had hit me. Little did I know that our office was investigating this story.’

If she was affected more than 24 hours later, how many people may have suffered this way? Affected people are keeping their identities private, as legal proceedings are underfoot.

A customer who was sitting at the Mugg & Bean with his six year old son, is angry about the effect the pesticide could have on his son.

‘I smelled the pesticide, but didn’t realize that it was a banned substance. My son said ‘dad there’s a guy behind you with a mask,’ and I looked around and chased him away. He just carried on further along the path.’

‘A professor at the University of Cape Town told me we weren’t exposed to the pesticide long enough for it to have severe effects. But usually when chlorpyrifos is sprayed on farms, there’s a time period during which no-one should be exposed to the area where it was sprayed. We were sitting right there, eating, while it was sprayed.’

The time period during which nobody is allowed in the area when this substance has been sprayed, without protective clothing and masks is 24 hours. But the product stays active for between 90 and 279 days! The customer added that it’s too late now for him to take his son for blood tests.

‘I am grateful that nothing serious happened to him, but then again, I don’t actually know if he’s okay, because sometimes the side-effects can only become visible weeks after.’

‘When I jumped up to chase the sprayer away, I had to excuse myself to four or five tables of people who just sat there accepting the spray. They didn’t even think of asking what it was and why it smelled so terrible.’

‘The fact that the employees of the V&A Waterfront that handle the pesticide were not even informed of the dangers and health risks for themselves and those around them, is shocking and unacceptable,’ an eye witness said.

Another eye-witness was so sick she had to stay in bed for almost a week.

‘I felt so sick I couldn’t even confront the sprayer’s supervisors that had just arrived. I felt as if I was dying.’

‘The ignorance of management is unacceptable. It’s illegal for the Waterfront to even have the chlorpyrifos. The sprayer admitted that he didn’t know that the substance was banned and was glad to be able to stop using it, because he himself was affected by it,’ she said.

An official statement the V&A Waterfront said they were most concerned when this matter was brought to their attention, as the safety and welfare of the public is always of paramount importance to them.

‘As soon we were made aware of the claims that an alleged banned pesticide product had been applied to certain external areas of the V&A Waterfront, we immediately withdrew the substance from use and have made arrangements for its removal and safe disposal with the supplier. We have commissioned a full investigation and are still waiting for the outcome of this investigation. As a further precaution, we brought an expert in to take steps to neutralise the pesticide applied and are seeking additional expert advice. We are also following up the matter with the suppliers and manufacturers of the product. We are committed to the health and safety of all staff and visitors and will take every precaution to prevent something like this happening again.’

Green Times also asked them a couple of questions, to which they responded as follows:

Angela Andrews from the Legal Resources Unit in Cape Town, together with TATIB and Dr. Johan Minnaar has been working for years to get the use of chlorpyrifos banned from residential use and for stringent controls in agricultural use.

Green Times has reported extensively on the problem of poison sprays used on farms and drifting into towns, causing a range of health problems, polluting ground water resources and posing dangers to farm workers and children:

Those affected by the chlorpyrifos will be laying criminal charges against the Waterfront.