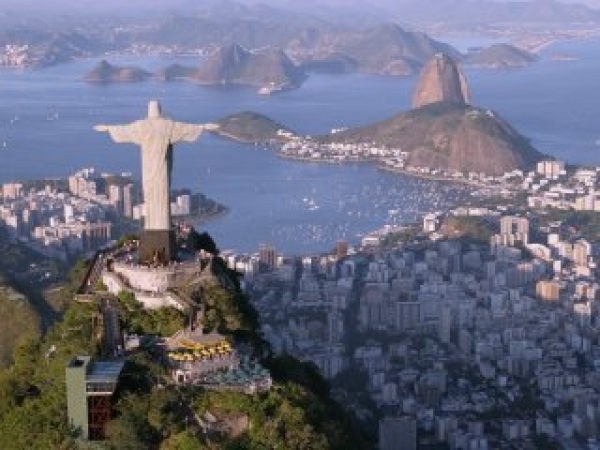 In recent decades, mankind has made many efforts on behalf of the environment. With the recent news of scientists about the rapid melting of glaciers and the intensification of global warming at an alarming rate, individuals and institutions have taken numerous actions towards reversing this process and many others that affect the existence of life on the planet. This is where the Church is also engaged. In this scenario, the World Youth Rio2013 promises to leave an environmental legacy to the city of Rio, to the country and to the world.

Therefore, on June 3rd at the Pontifical Catholic University of Rio de Janeiro (PUC-Rio), the Green Guide for WYD, which will be part of the kit that pilgrims receive for the Jornada, was launched. The launch of the guide was part of Environment Week PUC, in time for the celebration of World Environment Day on June 5th.

Prepared by the rector of the PUC-Rio, Father Josaphat Siqueira, and director of the Interdisciplinary Center for the Environment at PUC (NIMA), Luiz Felipe Guanaes, at the request of the Archdiocese of Rio, the guide comes in two versions, one in Portuguese and the other in English. It was inspired by various Church documents on the environment, including the document “Healing the wounded world,” a special report on ecology produced by the Secretariat of Social Justice and Ecology of the Society of Jesus.

According to Father Josaphat, the guide will awaken youth to incorporate faith into the preservation of God’s Creation. “The purpose of the Green Guide for WYD is to emphasize the importance of sustainable actions in major events; to show that ecological issues are related to faith; to help remember theological responsibility for creation and our mission of caring for what God has placed in our hands, and to show the ethical concern of the Church for the environment,” he explained.

In agreement with Guanaes, the guide begins by highlighting the natural beauty of the Marvelous City, with its parks and forests, and the care that young people should take with the environment while they stay in Rio, no matter whether they are in lodging or at the events of WYD. “We start the text by speaking about the city of Rio, which is a tribute to nature. Christ the Redeemer is the symbol that makes you look up. And when you look up, you see that he has a crown of green all around. This place is special and the man-nature relationship is expressed in a very concrete way,” he said.

In this sense, the guide suggests a series of commitments. We suggest a number of commitments, such as disposing of trash in trash cans and trying to use as little transportation as possible with high CO2 production, instead opting for a little walk, renting a bike or taking the subway. Furthermore, the paper also highlights the care that the pilgrim must have where he stays, such as attention to the waste of water and light. “We try to encourage the youth in the process of raising awareness of these things. We also discuss noise because it has to do with respect for others. The pilgrim is a member of the house and must comply with the same rules,” emphasized the director of NIMA.

A separate item highlights the commitment to the environment at the Vigil Mass and the Sending Forth Mass in Guaratiba, where there will be millions of people. This, therefore, according to Guanaes the consciousness and proactivity of the youth will be of paramount importance for the care of the local ecosystem. “There is a radical situation in terms of the number of people. Then the question of litter is still more serious. The whole area is divided into 12 large rectangles. In each of these boxes there is a whole infrastructure, and the youngsters will be distributed throughout them. There will be large units receiving recycled and wet garbage. And (the youth) will have to take the garbage down there; if not, you’ll turn it into a big mess. You have to be extremely open-spirited towards each other in a very concrete way,” he explained.

The ecological guide is also a reflection on the commitment to the environment that the pilgrims should take back to their own countries. Those pilgrims who wish may, by way of a page on the website of NIMA, measure their consumption of carbon dioxide (CO2) and how many trees should be planted to compensate for what was consumed. “We thought that a bridge should be created. And we suggested that they concern themselves with taking a new stance toward the environment, to make up for the capture of CO2 you youth used. We suggest that people do this with local plants,” said Guanaes.

At the end of the guide, the pilgrims can still learn about the positions of the last four popes with respect to the environment in the documents they wrote.