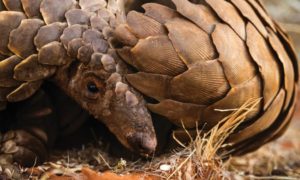 One of the wild animals most threatened by trafficking is the pangolin.

The world is currently grappling with the worst public health emergency in recent memory. The recent outbreak of COVID-19 has brought the link between zoonotic diseases – those transmitted from animals to humans – and wildlife trade into sharp focus.

The World Health Organization (WHO) has reported that the current COVID-19 pandemic, along with at least 61% of all human pathogens, are zoonotic in origin – and wildlife trade is an aggravating risk in the spread of zoonoses.

Other recent epidemics, including SARS, MERS and Ebola, have also all been traced back to viruses that spread from animals to people.

Questions remain about the exact origins of COVID-19, but the World Health Organization has confirmed it is a zoonotic disease, meaning it jumped from wildlife to humans. However, we must keep in mind that wildlife itself is not responsible for the spread of the disease, but rather irresponsible human behaviour such as the illegal wildlife trade, unregulated and unsanitary “wet markets,” massive deforestation and illegal logging, and human consumption of these often endangered wild animals.

Unsustainable wildlife trade is the second-largest direct threat to biodiversity globally, after habitat destruction. Populations of vertebrate species on earth declined by an average 60% since 1970, and a 2019 report from the Intergovernmental Science-Policy Platform on Biodiversity and Ecosystem Services (IPBES) concluded that an average of 25% of global species are currently threatened with extinction. Biodiversity must be protected in order to protect our own health as well as the planet’s.

According to new research by WWF, over 90 per cent of respondents surveyed in Southeast Asia and Hong Kong support a government-led closure of illegal and unregulated wildlife markets.

“The public in Asia have spoken – those living in countries where wildlife markets are most prevalent are demanding that wildlife consumption is curbed and illegal and unregulated wildlife trade is eliminated. People are deeply worried and would support their governments in taking action to prevent potential future global health crises originating in wildlife markets.” said Marco Lambertini, Director General of WWF International.

“It is time to connect the dots between wildlife trade, environmental degradation and risks to human health. Taking action now for humans as well as the many wildlife species threatened by consumption and trade is crucial for all of our survival.”

This is not an “Asian problem.” According to Interpol, environmental crime now ranks as the 3rd largest criminal sector worldwide. Just a year ago it was 4th. Environmental crime includes poaching, illegal logging, and the trade in endangered and protected plants and animals. Organised crime has become increasingly involved because of the relatively low risk and mild punishments in comparison to the illegal drug trade or human trafficking.

In Central and Eastern Europe, WWF is cooperating with Interpol to train local law enforcement, prosecutors, police and customs officers to be more effective in their fight against illegal logging and working on the root causes of poaching of strictly protected sturgeon and large carnivores such as lynx, brown bears and wolves.

Cracking down on illegal and unregulated wildlife trade is important to prevent future zoonotic epidemics and safeguard people’s well-being and lives. With strong public support, we call on Ministers of Health and Ministers of Environment to work together to stop the next potential epidemic. Biodiversity must be protected in order to protect our own health as well as the planet’s. This is why the EU Biodiversity Strategy under the European Green Deal must provide a strong push towards shutting down illegal wildlife trade and preserving ecosystems in Europe and abroad. Future pandemics will only be avoided if people learn to live in harmony with nature.