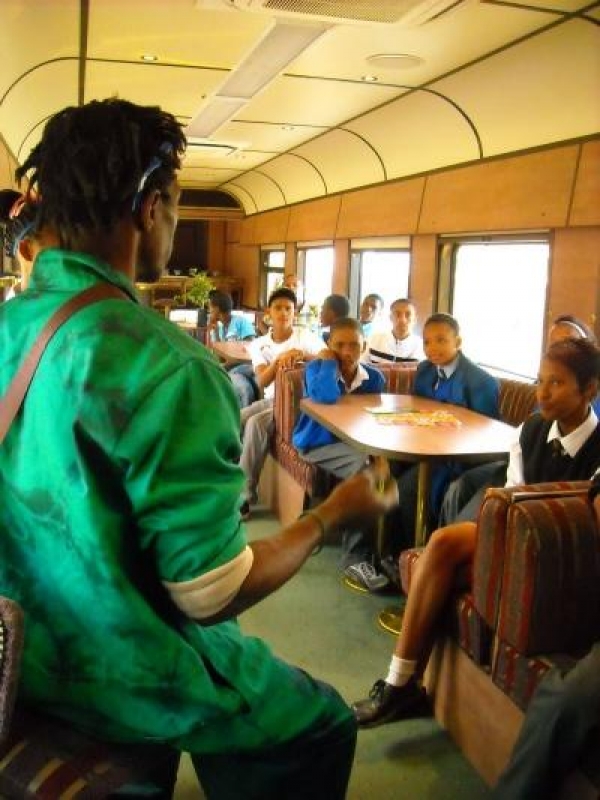 “The Earth Forum and exploration of the Charter enabled me to gain a deeper appreciation for nature, making me realise the desperate need for environmental education in vulnerable and poor communities,’ said Youth Forum leader, Sofuthi Balungile (22) about his experience on the Climate Train at its first stop in Worcester.

Sofuthi described the afternoon in a round table discussion surrounding the Universal Declaration of Rights for Mother Earth.

‘It’s not everyday that we get such platforms to voice our opinions and engage in meaningful discussions about environmental issues. It’s seldom that we get educated about the Earth’s rights. All we talk about is human rights, but it’s vital to understand that Earth is also entitled to her own rights. We have become so selfish in our actions and thoughts towards Earth.’

The Climate Train’s conference coach was host to a passionate group of the Zwelethemba Youth Forum. The group, together with Dylan McGarry, Doctoral student in Environmental Education and Social Sculpture and contributor to the COPART movement of climate artists, sat down for an exchange about the true values of the country’s indigenous cultures, the most ancient on Earth.

Collectively they explored their inner concerns and values around the current status of life in the impoverished community of Zwelathemba. Engaging with practical responses, they contemplated their own fundamental values needed for meaningful change.

The Declaration was adopted last year in South American countries after intensive consultations following the failure of COP 15 in Copenhagen in 2009. It encapsulates the aspirations and fundamental values of 32,000 people including many groups of indigenous peoples from around the world. A complementary process for Africa is being embarked upon on the Climate Train to Cop 17 in Durban.

According to Dylan, this open and earnest exchange was made possible through the Earth Forum Social Sculpture the students participated in earlier the day under a tree outside the desolated train station:

‘Often round table discussions revolve around mediation and negotiations, but the Earth Forum is about instilling a capacity to empathize, to really listen and imagine what someone else is experiencing. The Earth Forum allows a group to explore together how they are living in a climate changing world.’

The link between social and environmental issues

‘I think a train is the perfect vehicle to reach people who do not have access to this kind of information. Walking out of the train today I felt so happy and fortunate to have been a part of a change and I am excited to go back into my community and relay the message. I wish all the youngsters in Worcester could have been a part of it, because it has broadened our understanding about serious environmental and social issues. We want to see our land prosper! I hope it’s not the last time that this train will be seen on Worcester’s train tracks,’ said Sofuthi.

For Alex Ndzima (23) the afternoon exploration of the ‘People’s Charter for Africa’ was an eye-opener. 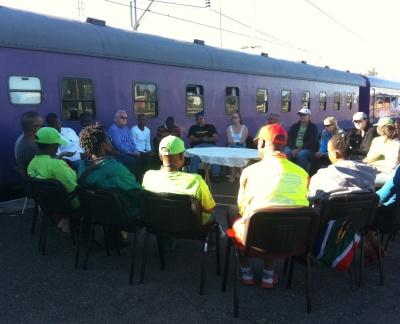 ‘As we sat in the train carriage, filled with all sorts of beautiful trees, listening to everyone as we sat in one big circle, I began to understand the link between social and environmental issues. I now have a clearer vision of my purpose and responsibility as an individual towards Earth. I realised that no matter how rich or poor one is, we are all equal in fighting the battle against climate change. We need to work side by side if we want to see a change.’

As part of the Earth Forum Social Sculpture the group explored the surrounding grounds of the Worcester train station to gather a handful of earth. Using their imagination as an instrument to observe their own inner thoughts, feelings and values, they where able to ‘unearth’ their own inner insights of what was significant to them and their community.

Mindful youth concerned about their land

Alex collected a piece of broken glass and two leaves, which signified the misuse of alcohol. ‘It’s the simple things in life, such as nature, that goes unnoticed in society,’ he said.

Dylan said he was moved by the group’s sensitivity, leadership abilities and gentleness.

‘It was an amazing experience working with the youth of the Breederivier Valley. They spoke so mindfully about their concerns about their land and community. To me it was far more profound than any COP17 negotiation.’