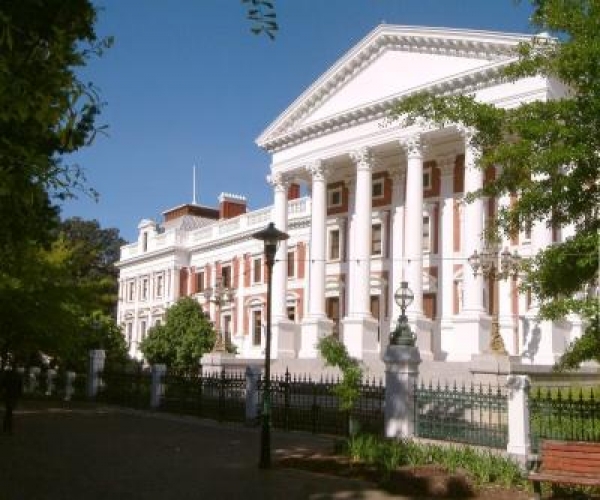 Women and the youth spoke up strongly during the public hearings on the National Climate Change Response Green Paper in parliament, conducted by the Portfolio Committee on Water and Environmental Affairs.

Women and the youth spoke up strongly during the public hearings on the National Climate Change Response Green Paper in parliament, conducted by the Portfolio Committee on Water and Environmental Affairs.

Environmentalists, scientists, advocates, journalists, women empowerment forums, NGOs, youth forums and academics swarmed to Cape Town’s parliament, all in the name of saving the planet. A lot of critique was given and many adjustments await the green paper, but the overall cooperation in parliament was very positive.

Bishop Geoff Davies, from the Southern African Faith Community’s Environment Institute (SAFCEI) started with  a prayer before presenting his opinion with the aid of Ms Candice McDaid.

‘Climate change is the greatest threat humanity has ever faced. Injustice to the climate brings injustice to our people,’ the bishop said. ‘No country should be allowed to carry on as they are now. The situation is alarming.’

He plans an African congress and a Pan congress this year where carbon emission peaks will be explained to African communities.

‘Churches will be playing a greater role in the dissemination of climate change information.’

‘There is an enormous gap between the carbon emission reduction goals required by science and our current goals,’ McDaid said. ‘1800 people died in hurricane Katrina. 35 000 people died in the heat wave that hit Europe in 2003. These are all direct impacts of climate change.’

With regards to the expected 2-3 degrees rise in temperature in South Africa, McDaid added: ‘We speak about it as if it is very easy to adapt, but where are you going to go to? If you live in a hot tin shack, what are you going to do?’

McDaid believes we can solve climate change with direct action and the necessary financing.

‘South Africa is a deeply unequal society. If we can reach a consensus in the fight against climate change, we can be a role-model for other countries. Climate change is a deeply moral issue dealing with the future life on this planet.’

She showed the audience a comic of a guy looking at all the evidence for fighting climate change, saying: ‘what if itâ’s all a big hoax and we create a better world for nothing?’

We need another miracle

‘There is no sense of urgency in the green paper,’ McDaid said. ‘During the World Cup when we had to build stadiums, there was money and it simply happened. We need direct action. Eskom shouldn’t be allowed to build any more power stations. Maybe SASOL will have to close. Government has to take the uncomfortable lead of making those choices.’

‘This year is the 17th time the world is coming together to discuss climate change. In 1994 South Africa was able to pull a miracle. Maybe this year will be the same for our earth?’

‘We don’t even have electricity,’ the representative of the Women’s Energy and Climate Change Forum said.

‘We read in your green paper about ‘clean coal.’ Well, bring this coal to us in the township. Show us what you are speaking about. We know you burn coal to make fire and there’s a lot of smoke. It’s not clean.’

Language poses a barrier to understanding

The Women’s Energy and Climate Change Forum expressed their concern about the issue of language. The green paper is only available in English, and renders the other ten official languages’ speakers at a disadvantage.

‘How do you expect the women from the townships to give a public opinion about the green paper if we don’t understand what it is saying?’

‘How many women and young people have had access to this paper? We need people to come down to us and listen to us,’ a member of the women’s forum said. ‘Our people don’t know about these issues or understand them. It’s like Chinese to us.’

’When people want votes, they go out and they get those votes. Why don’t they use the same strategy with climate change?’

Another member of the forum also complained that they didn’t have electricity and had to find wood to make fire with.

‘We put ourselves into dangerous situations to find that wood. We are the most affected by climate change. It is the cause of most of the challenges we are facing.’

She added: ‘Mosquitoes are killing our residents due to climate change. It is the women who are swept away by the streams with babies on our backs.’

‘Let the message of climate change reach every woman in the country. These women will be able to come up with ideas of how to help the earth..

The representatives of Water and Environmental Affairs will be using industrial theatre, pictures and music to create awareness and educate South Africans about climate change this year. They said the women’s forum has reminded them that there are basic issues most people in our country are facing, and those issues should not be forgotten.

‘We cannot wait for great visions from great people for they are in short supply. We must light our own fires in the darkness.’

According to the Youth in Climate Change Forum, the information in the Green Paper is outdated:

‘The issue is now more severe and South Africa should invest more in research and technology.’

Children born with defects from mine pollution

One of the extreme cases illustrated in the youth forum’s presentation, is that of children born with defects because of polluted water in the Kempton Park area. The members of parliament were not aware that mines were making this area’s water so toxic that it has already affected the next generation.

‘We demand maximum awareness and education around climate change,’ said Mr Kabelo Radebe, one of the Youth in Climate Change Forum’s representatives. ‘We should be speeding up South Africa’s goals and properly implement adaptation on all levels of society.’

‘Renewables will save the planet,’ said the Youth in Climate Change Forum. ‘Nuclear plants will destroy South Africa’s agriculture.’

In Uruguay the use of digesters -using human faeces to create energy has proven successful and economical.

‘We should focus our attention on real alternatives, such as biogas. Why don’t we try and put a digester in every single house?’

The Youth in Climate Change Forum expressed their grave concern that climate change issues have not reached mainstream media yet.

‘Why are you not informing people fast enough?’

Micro-farming helps the community in more than one way.

The Youth and Cultural Ambassadors, who are responsible for projects involving the youth in organic farming, were concerned about section five in the green paper, concerning the policy on genetically modified crops.

The ambassadors are adamant about the need for better technology in the agricultural sector.

‘We must take a hands-on approach. The solution lies in redesigning our food production and consumption systems. In the end we waste half of the food we produce. We should support micro-farming, and the youth plays a big role in this.’

These ambassadors are currently training 1000 kids and plan to hire 500 more before the end of the year to do training in micro-farming.

‘We need support from the government. Not only are we supporting organic farming, we are also taking teenagers off the streets and helping the community.’

Both the Youth in Climate Change Forum and the Youth and Cultural Ambassadors suggested the implementation of one food garden per household, one per church and one per school within the next 20 years.

‘We want our communities to be clean.’

Advocate JH de Lange who is in charge of the response to the green paper, applauded the youth for making excellent suggestions and for speaking up.

‘At COP 17 South Africa has to showcase its own awareness, and the youth are very vocal about these issues. We have to realise the future is theirs and they are preparing for big impacts of climate change.’

He said that the climate has already changed dramatically since he was a young man.

‘The older people in any community will tell you how much things have changed. We should be empowering people to take control of their own areas.’

The final responses have been discussed this week and another draft of the green paper will be drawn up. The South African government is actively getting involved in environmental issues and hopefully the first Conference of Parties in Africa will be the first one where negotiations are successfully made.