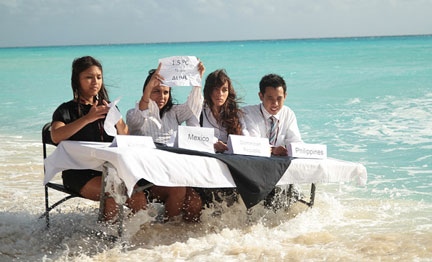 Young people are often the most passionate voices on climate change, and with reason – as the planet warms over the coming century, it is the future of the youngest at stake.

As such, it is often youth that are the loudest and the most ambitious in calling for action, proving to be anything from serious combatants to potential allies to the politicians in charge.

But do their pickets and their pleas actually achieve anything? For Responding to Climate Change’s Youth Week, we’ve picked 11 moments where young people have made climate history.

1. The young heckler who changed direction of US climate policy

Todd Stern, the US lead on climate change, wore a bemused smile when Abigail Borah, a 21-year-old junior from Middlebury College, interrupted his prepared remarks with a cry for greater leadership at the UN’s 2011 climate conference in Durban. But something must have gone on behind his surprised expression, because, after security had escorted out the young heckler, Stern appeared to change his lukewarm position on an EU’s proposal for a new climate treaty, going on to endorse the idea.

2. The girl who silenced the world for 6 minutes

In 1992, a 12-year-old girl called Severn Suzuki stood up before 172 governments and told them: “If you don’t know how to fix it, please stop breaking it.” This was at the UN’s Rio conference, where the Convention on Climate Change was born. Suzuki’s speech, which reduced delegates to tears and became a viral video, is now one of the UN’s legendary moments and continues to inspire, earning her the nickname “The girl who silenced the world for six minutes”.

3. The schoolchildren who kept climate change on the curriculum

When UK education secretary Michael Gove wanted to wipe climate change from the school curriculum, the kids were not alright. A 15-year-old London student, part of the UKYCC network, started a petition calling on Gove to keep climate change on the syllabus, which gained over 70,000 signatures. Backed by pressure from UK climate and energy secretary Ed Davey, Gove eventually abandoned his plans to drop climate from the curriculum.

4. The students who got fossil fuels expelled from college

Like a modern-day version of Les Miserables, university students are leading the crusade for a better world. But instead of building barricades, they’re calling on their alma maters to abandon fossil fuels by pulling their investments from dirty industries. In the US, 13 colleges, including Stanford University, have made pledges to divest, and the movement is beginning to take off in the UK as well, with Glasgow and SOAS currently reviewing their investments.

5. When half the world’s population took the floor at the UN

A speech by youth delegate Anjali Appadurai provoked a chant and a rare moment of empathy from a key diplomat at UN’s 2011 climate conference in Durban. Taking the floor, Appadurai told the delegates that she was there to “speak for more than half the world’s population”. At the end of the speech, co-chair Artur Runge-Metzger delivered a rare personal aside: “On a purely personal note, I wonder why we let not speak half of the world’s population first in this conference but only last?”

6. The Maldives youth who made the UN recognise young people

Perhaps the Maldives delegation didn’t know what they had taken on when they agreed to include 26-year-old campaigner Aisha Niyaz onto their team during the UN’s 2011 climate conference. But it was her determination that led to the role of youth being formally acknowledged – in writing – during that year’s round of talks. Youth is an issue close to the heart of many young activists, but it was Aisha’s seat on the delegation that meant she was able to bring it up around the negotiating table and get it included in the final text.

7. The Venezuelan kids who want to change the system, not the climate

In July, climate activists gathered in Venezuela to hatch their own vision of the world, which they hope will be included in the UN’s 2015 climate deal. The conference included a special session entitled “The future takes the floor”, in which young Venezuelan Scout equivalents were able to host some panels and take part in cultural activities. The influence of the Margarita Declaration, which participants produced during the session, will ultimately be determined by ministers, who will receive the document in November. 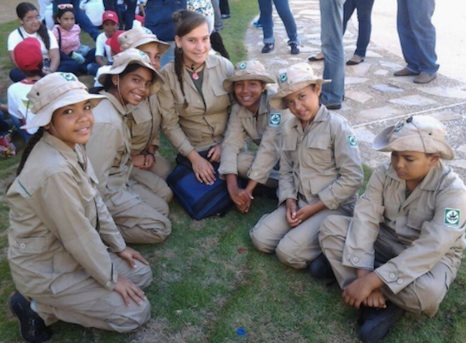 If you need further proof that young people do more than just shout, take a look at Bernice Dapaah and Millie Darling, two entrepreneurs who couldn’t wait to start building a cleaner world. Dapaah, from Ghana, set up the Bamboo Bikes Initiative in 2010 while still at college, creating a green mode of transport out of the sustainable material, earning her the title of World Economic Forum Young Global Leader. At age 21, Darling set up her own energy cooperative in Hackney, London, offering community owned solar energy to local residents.

It must be frustrating for some politicians that certain children seem to wield greater influence than them over climate change simply by existing. Leaders, including US President Barack Obama, frequently cite their children as the inspiration and the reason for their actions. “You talk to Malia, you talk to Sasha, you talk to your kids or your grandkids – this is something they get,” he said. “They don’t need a lot of persuading.”

10. The Australian who wiped out a coal company

Jonathan Moylan, a 24-year-old Australian, started a dangerous game when he faked a press release from ANZ bank, announcing the withdrawal of a $1.2billion dollar loan to the Maules Creek coal mine project on environmental and ethical grounds. Journalists took the rogue PR wannabe at his word and published the story, temporarily wiping $314m off the value of Whitehaven Coal, the company running the development. Moylan initially faced up to 10 years in prison, but was eventually given a suspended sentence of 1 year 8 months.

11. The nine-year-old who planted a million trees

In 2009, a nine-year-old German boy called Felix Finkbeiner had to do a school presentation on climate change. After some googling, he decided to speak about the Kenyan Nobel prize winner Wangari Maathai, who planted 45 million trees. This provided the seeds for his own Plant for the Planet campaign, with the aim of planting a million trees. This was achieved in 2011, and since then Felix has gone on to become an eco-superstar, written a book, and given speeches before the European Parliament and the UN.