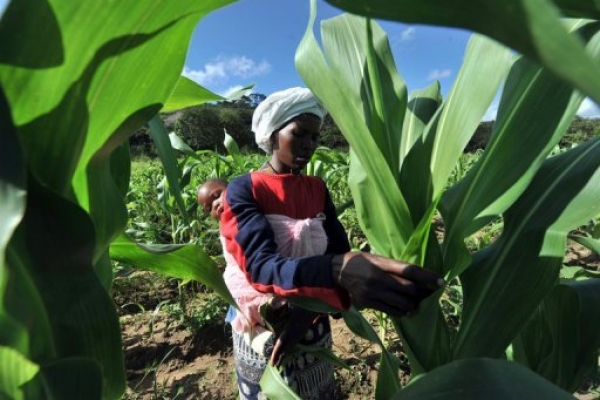 A woman checks maize crop on a farm in Chinhamora, north of Harare, Zimbabwe.

Zimbabwe will suffer a one million tonne maize deficit due to drought, after nearly half of the national crop now coming up for harvest has failed, state media said Friday.

“Forty five percent of maize that was planted this season is a write-off,” Agriculture Minister Joseph Made said in The Herald newspaper.

Made said the country has 400,000 tonnes of maize stocks, which must be complemented by imports to prevent hunger in the southern African country.

Zimbabwe needs 2.2 million tonnes of the staple grain maize to feed itself annually.

In the 1990s, Zimbabwe was a net exporter of maize before disastrous land reforms led by President Robert Mugabe, which removed more than 4,000 white commercial farmers from their land to resettle with everyone from black peasant farmers to political elites.

Since then Zimbabwe has failed to meet its food requirements.

The World Food Programme is currently giving food to one million Zimbabweans, mainly the extremely poor who depend on farming to survive.

The United Nations has already appealed for $488 million dollars in food aid for Zimbabwe for last year and the first months of this year.