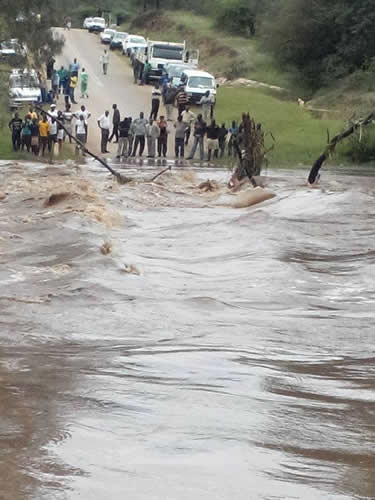 Zimbabwe’s largest diversified media group, Zimpapers, through its Zimpapers Digital-caring for communities initiative, handed over goods donated by readers which included food, blankets and clothes to victims of the Tsholotsho floods to the district’s Civil Protection Unit.

The truckload of goods were collected from readers all over Zimbabwe and Zimpapers staffers who were touched by the plight after the floods that were experienced in the district’s ward six and eight.

Accepting the handover, Tsholotsho district administrator, Ms Nosizi Dube, said while they were grateful of all the assistance they had received from the Government, organisations and individuals and their main concern now was the reconstruction of homesteads that were washed away by the heavy rains.

“We have received a lot of assistance and it is very heartening and we are grateful, however our main worry at the moment is the reconstruction of houses for some of the villagers who lost their property during the floods.

“Right now we are faced with another possible flood in ward seven and there is a possibility that a whole lot more villagers might have their homesteads washed away therefore we appeal for building materials that will assist our villagers reconstruct their houses,” said Ms Dube.

Speaking on behalf of Zimpapers Bulawayo branch general manager, Mr Max Shayamano, Stanford Chiwanga, the Bulawayo branch online editor said the donations are from the readers with Zimpapers only acting as a conduit.

Zimbabweans take care of their own

“These donations are not from Zimpapers, we are just a conveyor belt that lugged the donations from the readers to the flood victims. However, we also applaud the Zimpapers staff who also donated their clothes and blankets. The overwhelming response from Zimpapers clearly shows that we are a selfless society that comes to the rescue of the troubled,” he said.

Zimpapers digital editor Innocent Gore lauded readers and staffers saying that this showed that they were a benevolent lot. He said despite reports that Tsholotsho had been forgotten the fact that the Government had sent a ministerial delegation and the donation by Zimpapers showed that there was commitment to assist the flood victims.

“With what we have donated to date, it shows that Zimbabweans are a responsible lot, I know it has been alleged that Tsholotsho has been ignored but this is not true judging from the recent Ministerial tour and this donation from our readers.

“I would especially express my gratitude to our readers who reacted to our call for donations. This clearly shows the power of the media if used responsibly and as a responsible media house, we realised that flood victims from Tokwe-Mukosi and Tsholotsho needed assistance hence this drive,” said Gore.

The Zimpapers hand over came just after a Ministerial tour of the district led by the Senior Minister of State in the President’s office, Simon Khaya Moyo.