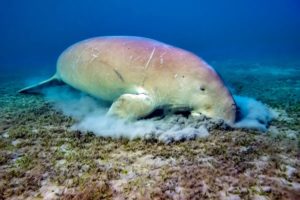 Oceans cover 70% of the Earth’s surface, yet less than 1% of these critical systems are under any form of legal protection. The Convention on Biological Diversity‘s  Global Biodiversity Outlook indicates that the world’s marine ecosystems are in peril.

Along southern Africa’s east coast, the dugong is one marine mammal in urgent need of protection.

If we do not act quickly to alleviate pressures on our marine environment, there will be serious impacts on economies and livelihoods worldwide. Approximately 200 million people are dependent on fisheries for their livelihoods and survival, while marine resources provide 16% of the protein consumed globally and have an estimated value of US$82 billion.

Many marine protected areas have been defined in recent years, but 82% of the world’s marine ecosystems do not yet meet the CBD’s target for ‘a global network of comprehensive, representative and effectively managed national and regional protected area systems established.’ This target was set for each of the world’s ecological regions and is aimed at conserving a representative sample of biodiversity. The target for terrestrial ecosystems was set for 2010 and for marine ecosystems, 2012.

65% of our marine bio zones are threatened

South Africa’s oceans are home to about 10 000 species, representing about 15% of the world’s marine species with more than 25% of these being endemic. Yet 65% of our marine bio zones are threatened. Of these, 12% are Critically Endangered, 15% Endangered and 38% Vulnerable. Stocks of 11 of South Africa’s line fish species are already considered collapsed and while 21.5% of our coastline falls within Marine Protected Areas (MPAs), only 9% falls within no-take zones, well short of the target of 15% set by the CBD for 2012.

One important marine ecosystem needing urgent attention in southern Africa is seagrass. Seagrass meadows border coastlines in the tropics and sub-tropics around the globe and rank as one of the world’s most productive habitats. They perform vital ecosystem functions, including providing support for commercial fisheries, a food source for species such as sea turtles, manatees and dugongs, and stabilisation of sediments.

They are the breeding grounds and nurseries for important crustacean, finfish and shellfish populations. The economic value of seagrass ecosystems is estimated at US$19 000 per hectare per year, 10 times more than that of tropical forests. What’s more, their slow decomposition rate and extensive below-ground storage tissue mean seagrasses contribute an important carbon sink and evidence suggests that seagrass meadows are responsible for 15% of total carbon storage in the ocean.

Yet about 29% of the world’s seagrass habitats have disappeared since the 1800s, with a sharp increase in recent decades.

Dugongs on the way out

A species that is utterly dependent on this seagrass habitat is the dugong. Globally, Dugongs are listed as Vulnerable on the IUCN Red List, based on a population reduction of 30% in the last 66-75 years. Their status along the East African coast and Western Indian Ocean is of major concern.

Dugongs are seagrass specialists. This, and the fact that they are long-lived marine mammals with low reproductive rates, makes them particularly vulnerable to extinction. The global stronghold of some 50 000 dugongs lies within Australian waters, while another 7 000 animals occur in the Arabian Gulf and Red Sea region. Recent aerial surveys indicate that the area in and around Mozambique’s Bazaruto Archipelago National Park retains a dugong population of no more than 200 animals. The need to act on behalf of this, the only viable population of Dugongs remaining in the area, is therefore extremely urgent.

The Bazaruto Archipelago supports a population of about 3 500 people, and more than 70% of this population is directly dependent on marine resource harvesting. As a result, human induced pressures place major pressure on Bazaruto’s coastal ecosystems. Already some 60% of the Indian Ocean’s seagrasses have been decimated, while local fishermen report a reduction in fish stocks. Both deficiencies have direct impacts on dugong forage availability, their movements, and calving success.

Accidental, and sometimes intentional entangling in gillnets is also a major cause of dugong mortality. Of most concern in the Bazaruto Archipelago are the mortalities recorded as a result of commercial gillnetting for shark fins. Yet local fishing authorities continue to promote gillnetting over seining on the grounds that gillnets are more selective. There is also no formal legislation prohibiting the use of gillnets outside the National Park.

Furthermore, seine fishing, the prevalent method for subsistence and semi-commercial fish harvesting within and outside of the Bazaruto Archipelago National Park, results in uprooting and mechanical damage to the seagrasses, a reduction in their photosynthetic ability as a result of particle suspension in the water, and a decline in predatory fish stocks. When predatory fish are removed from a benthic ecosystem, their sea urchin prey proliferates and will overgraze and decimate seagrasses.

To address the urgent need for dugong conservation, the Endangered Wildlife Trust is implementing a Dugong Emergency Protection Project aiming to secure core dugong herds and habitat in Bazaruto. It will achieve this by mitigating major threats to Dugongs and their habitat and by strengthening existing management structures. The project will span five years and will partner with communities, local government, and a range of institutions.

If the world is to meet the CBD’s target of significantly reducing the rate of biodiversity loss, biodiversity must be mainstreamed. This entails incorporating biodiversity into planning, decision-making, land-use and production methods, especially in sectors where the core business is not biodiversity conservation. South Africa has already made substantial inroads in this regard. However, key decision-makers still do not fully appreciate the important role of biodiversity in the economy and for society at large. We call on governments of the world to urgently address this at the 10th meeting of the Conference of the Parties to the Convention on Biological Diversity, which is currently underway in Nagoya, Japan.

The 10th meeting of the Conference of Parties to the Convention on Biological Diversity (CBD) took place in Nagoya, Japan from 18-29 October 2010. This was where achievement was assessed of the 2010 target to significantly reduce the rate of biodiversity loss, an international regime on access and benefit-sharing was adopted and the International Year of Biodiversity 2010 was celebrated.

The Convention on Biological Diversity (CBD) is one of the most signed onto treaties in the world, and deals with the need to sustain the rich diversity of life on Earth. In 2002 the CBD adopted the 2010 Biodiversity Target, an international commitment to reduce biodiversity decline by 2010. However, the Target was never met. The impacts on livelihoods, human health, economies and our way of life will be severe if we do not quickly correct this situation.

The United Nations declared 2010 the International Year of Biodiversity and the CBD is driving the global campaign. It is a global campaign designed to encourage worldwide action to safeguard biodiversity. It is a celebration of life on Earth and of the value of biodiversity for our lives. It is an opportunity for every person to act; together we can ensure a sustainable future for all life.