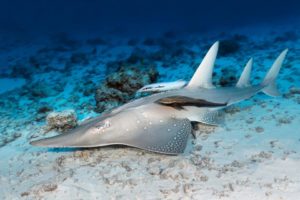 What better way to celebrate Shark Awareness Day (14 July) than with the news of a new shark and two rays (flatsharks) in African waters?

A new species of shark and 2 rays (guitarfish/ flatsharks to be exact) have recently been described by Dr David Ebert, an ichthyologist (devoted to the study of fish, including bony fish, cartilaginous fish, and jawless fish) based in California USA, consulting to the WILDOCEANS’ Shark and Ray Protection Project.

Dr Ebert is also a research associate at the South African Institute for Aquatic Biodiversity (SAIAB) in Makhanda, previously known as Grahamstown.

The new shark, the lanternshark (Etmopterus brosei), commonly called the Barrie’s lanternshark, resembles other species of the Etmopterus group. Etmopterus, which boasts to be one of the most diverse shark groups, has approximately 42 species belonging to it. Unique features to the (new) Barrie’s lanternshark are the arrangement of its markings, the shape and size of the markings and the presence of dermal denticles, which are modified teeth that act as tough scales to protect the skin, at the base of the dorsal fin.

Barrie’s lanternshark has an indistinct colour gradation between its sides and its belly and a V-shaped arrangement of ampullae (electroreceptors) on the bottom surface of its snout. It has a dorsal fin densely covered in dermal denticles, 85-88 vertebrae in its spine and a spiral valve with 11 turns in a corkscrew shaped part of the intestine.

The description of this new species was based on the freshly caught specimens which have been lodged at three museums, namely the Iziko Museum of South Africa in Cape Town, the South African Institute for Aquatic Biodiversity in Makhanda and in the Hamburg Zoological Museum in Germany. 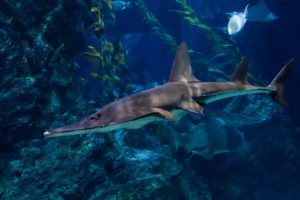 This shark is new to Africa, known to only occur from the west coast of South Africa to the western Agulhas Bank from 480–850m depth, off southern Mozambique in 980–1000m depth and on the southern end of the Madagascar Ridge, southwestern Indian Ocean and at Walters Shoal from about 896–1200m depth.

Speaking about the new shark Dr Jennifer Olbers of WILDOCEANS said, “if there was an improvement in the identification of species within the deep water South African fisheries, , this shark would most likely have a greater distribution in the southern African region..”

This Barrie’s lanternshark is one of six species which have not been evaluated by the IUCN Red List of Threatened Species. Etmopterus species are a common bycatch component in the offshore demersal trawl fishery, and possibly in deep-sea longline fisheries. Despite their common occurrence in bycatch of deep-sea fisheries, lanternsharks are poorly known and their catch data is rarely recorded. Furthermore, species-specific identification and information are often not recorded due to a lack of identification guides available. This lack of information inhibits effective management and informed conservation decisions.

Along with the new lanternshark, Dr Simon Weigmann (based in Hamburg Germany), Dr Ebert and Mr Bernard Séret discovered two new species of rays in the western Indian Ocean. The new species of ray were discovered upon closer examination of existing museum specimens where morphological evidence (based on the form of anatomical structures) was provided for a complex of species within Acroteriobatus leucospilus (Grey spot Guitarfish).

“Dr Weigmann and his colleagues split away two new rays from Acroteriobatus leucospilus what is commonly known in South Africa known as the Grey spot Guitarfish,” said Olbers. 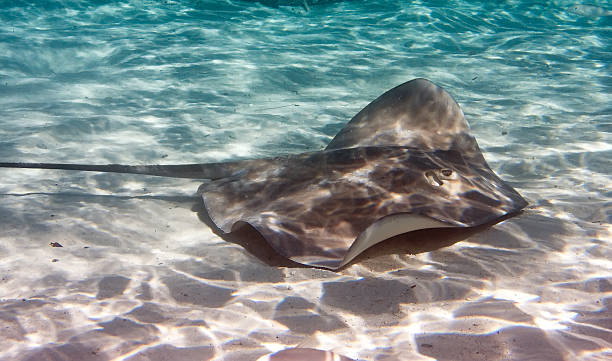 “What’s important here is that ‘our’ Grey spot Guitarfish is currently listed as Endangered, but now we know that its range is much more restricted than previously thought, this could change that assessment, with either an up- or downgrade on the IUCN Red List,” said Olbers.

“It would therefore be important that any fisheries management of this species is revised. With this revision, the Grey spot Guitarfish only occurs on the east coast of South Africa north to Tanzania, and not in Madagascar and off Yemen as previously thought. The clarity on taxonomic status (physical attributes defining different species) and the distribution of these three small-bodied guitarfishes (where in the ocean they are found) are essential for improved research and effective conservation and management policy decisions.” 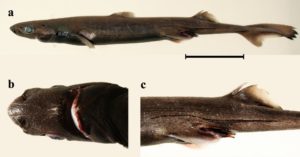 The Malagasy Blue-spotted Guitarfish has elongated bluish-grey spots that give the snout a ‘striped’ appearance and appear on all fins. It has brown spots on the body (excluding tail and head areas) as well as on the base of the fins (where fin meets body). The underside of the shark is mostly white with a V-shaped pattern of dark speckled black spots on the snout’s tip. The snout has an angle of 76-85° and the length of the rays’ head is between 24 – 33% of the total body length.

The second new ray species, the Socotra Blue-spotted Guitarfish has sparse patterning of small bluish-grey circular spots on the tip of the snout, on the outer edge of the pectoral fins (fins behind gills) and rear pelvic fins (fins on the bottom of the shark). The Socotra Blue-spotted Guitarfish has a pair of small bluish-grey circular spots on its body, a white underbelly and its head takes up about 20% of the animal’s total length.

South Africa is a global hotspot for sharks and rays and has nearly 200 species and yet we are still discovering new species and distribution records every year. It is imperative for South Africa to take every action possible to protect our very diverse marine environment to ensure that we not only preserve the species we know about, but also preserve the species that we are yet to discover.