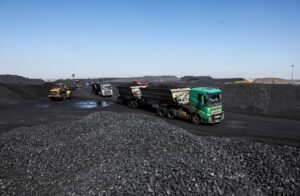 The Pretoria High Court condemned Tendele’s 2013 Environmental Impact Assessment (EIA) process in its recent judgment on 4 May 2022 because:

“The defective public notices issued by Tendele during September 2013 were only a precursor to the scoping phase, where the wheels came off. The wheels came off when the regional manager DMR, KwaZulu-Natal (RM), allowed Tendele’s consultants GCS, to dictate to him how Tendele intended to carry out the exercise that would lead to its Scoping Report, instead of insisting on compliance with the law.”

Judge Bam found the process unlawful and Tendele has therefore had to redo the EIA process for its new mining areas in the rural villages of Ophondweni, Emalahleni and Mahujini located along the provincial road R618 on the way to the Hluhluwe-iMfolozi Park from the N2 at Mtubatuba. This new process commenced on 1 July 2022 and the wheels appear to be coming off. Again.

Although no longer with GCS, Tendele has appointed the same environmental consultant, Christopher Wright, now of Black Rock Environmental, to conduct the EIA for the appeal. The process is already showing signs of non-compliance.

To remedy the deficiencies the first time around, Tendele was ordered to conduct public participation in a manner that is compliant with the requirements of EIA Regulations and the Public Participation Guidelines. These recommend that in projects where there is a high degree of conflict among interested and affected parties, and where the public participation processes have resulted in conflict, additional consultation may be required to ensure consensus is reached and that issues of conflict are addressed effectively. And yet the EAP has designed a public participation process that is geared to heighten conflict by effectively putting the traditional leadership in charge of conducting the consultation process in the community.

Firstly, the EAP is relying on the traditional leadership to disseminate information and arrange meetings despite having been informed in writing of the escalating tensions and violence in the community perpetrated by the traditional council, headmen and pro-mining residents and the likelihood that an EIA process could exacerbate these tensions.

Secondly, the EIA Regulations require, among a number of other things, that all landowners and occupiers of land within and adjacent to the mining area are notified of the proposed mining activities and the EIA process. For reasons yet to be explained, the EAP has determined that only people living within 1 km of each of the mining pits need to be notified. This is causing confusion as people are being given mixed messages by the traditional authority disseminating information and arranging meetings. Some residents are being told that if they live within this 1km radius, they will have to relocate; others have heard that they will only be relocated if they want to be.

Based on maps in MCEJO’s attorneys’ possession, it would appear that in addition to the 148 families already identified by Tendele as living within a 500m radius of the mining pits of Ophondweni and Emalahleni, an additional 226 families will be affected within this expanded radius of 1km. There are a further 228 families in Mahujini who have yet to be informed of the proposed mining operations. This makes a total of 602 families, approximately 6 000 people, who will have to give up their homes, fields and livelihoods and go through the painful process of exhuming the graves of their loved ones and relocating to make way for Tendele’s operations.

Thirdly, the Public Participation Guidelines specifically recommend that where people in the area are victims of unfair relocations in the past, public participation needs to be extensive and address unfair practices that occurred previously. There is no evidence in the EAP’s Background Information Document that the process has been designed to fulfil these recommendations despite many families still suffering from their relocation due to Tendele’s current mining operations and historic resettlement.

When approached for comment, All Rise, the attorneys for the 3000-strong community organisation MCEJO said they had written twice to Christopher Wright since receiving notice of the EIA process and were yet to receive a reply. In the latest letter sent last Wednesday, they notified him of the fear that the traditional leaders were causing in the community and asked him to stop the process immediately, to appoint truly independent specialists to conduct the public participation process, and to limit the traditional authority’s role to that of an interested and affected party only.

When asked about the EIA consultant’s response, All Rise said “it seems the EAP is currently in Europe and we may have to wait from him to get back before he will address our clients’ urgent concerns. In the meantime our clients don’t sleep for fear of attacks and the constant threats.” All Rise has also written urgent letters to the Provincial House of Traditional Leaders, COGTA and the local SAPS requesting assistance to protect their clients from the coercion and intimidation coming from the traditional authority and other pro-mining residents.

Tendele has been given a second chance to hold onto its mining right by following the correct processes and yet, it has hardly started the EIA process when the wheels show signs of coming off again … and this time, seemingly by remote control, as the EAP is not even in the country.