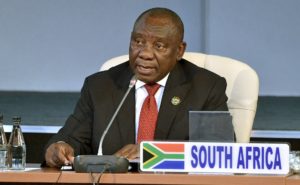 On 16th Sept, the African Climate Alliance was honoured with the Amnesty Ambassador of Conscience Award in South Africa, which was given to Greta Thunberg and youth climate strikers all over the world simultaneously on Monday. On Friday 20th Sept, youth in cities nationwide are asking their parents to join them on the streets at the Global Strike to call attention to the climate emergency ahead of the UN Climate Summit in New York.

The ACA are very disappointed that President Ramaphosa has announced that he will not be leading the SA government’s delegation to the summit, but staying home to concentrate on ‘domestic issues’. The ACA spokes-team is at pains to point out that violence against African immigrants and women and children in SA is unlikely to improve under conditions of climate emergency.

Spokes-teen Noa Brawerman said: “The domestic issues we are facing will only worsen as the climate crisis continues. It’s important to realise how they overlap… The summit is an opportunity for leaders to collectively address the importance of the climate emergency and our President’s absence shows that he is not ready to get to grips with the tasks ahead.”

Keeto Jenkins added: “I am outraged that the President, despite recognising the importance of climate activism in his SONA, has decided to ignore our future and the opportunity to demonstrate that he is a world leader and disregard the gravity of what the NY Summit represents.”

Kate Birch agreed: “President Ramaphosa doesn’t realise that while domestic issues are important, many of them will benefit from decarbonisation – from the huge job opportunities provided by a renewable energy industry”.

Lisakhanya Mathiso summed up: “I feel that our President doesn’t really care about our future… But maybe he just wants to stay home so he can join our strike on Friday?”

Peaceful protesters joining the Global Climate Strike on Friday 20th Sept will be meeting at 12 on the corner of Cambridge and Hanover (Keizergracht) streets in Zonnebloem before marching to Parliament. Mixed Mense from the legendary house of hip hop Heal the Hood will be headlining the stage show from 1pm afterwards.