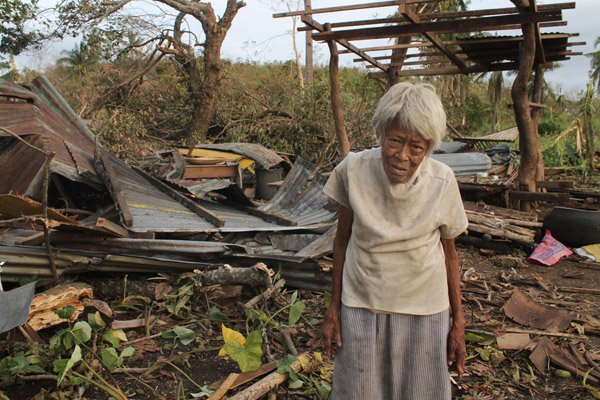 Nemesia Tipait, (81), was buried under the rubble of her house when it collapsed during Typhoon Haiyan. Image: Pio Arce/Genesis Photos – World Vision

As COP20 concludes, climate consultant Mike Edwards argues that delegates need to consider the need for ‘adaptation’ as well as ‘mitigation’.

In early November 2013, I was in San Francisco teaching a cohort of business graduates a course I had cheerily titled: ‘Global Crises’.

As it was early in the course, I was setting the scene with an introduction to climate change.

I had said a bit about the science; a little bit about the policy and I had done my usual thing of blaming the Scientific Revolution, of the sixteenth and seventeenth centuries, for creating a separation between humans and nature – the true cause of climate change.

I blame this separation for creating an economic system that grows as nature, the true source of human security, dies.

Most of what I talk about is moral philosophy. I am interested in ways of living that are fair to nature and fair across, and between, generations. I try hard to show my students how poverty, the result of an inequitable economic system, can make people vulnerable to climate change. Some people get it, others don’t. Last year, an event occurred that proved my point.

On November 7, Typhoon Haiyan made landfall in the Philippines and became the deadliest Typhoon ever to hit the country. Estimates suggest that up to 14 million people were affected and over 6000 people died.

It was those living in vulnerable situations that were particularly exposed to Haiyan. Years of political corruption, combined with high rates of income inequality, meant many people in the Philippines were, and still are, living in abject poverty.

Whilst it is impossible to attribute Typhoon Haiyan to climate change, in a world that is warming, extreme weather events are likely to become more frequent and intense.

As I write this blog, another Typhoon has just slammed into the Philippines. This one, called Typhoon Hagupit, has not been as severe as Haiyan.

Eleven thousand miles from the Philippines, delegates are concluding their meetings in Lima, Peru. They have spent weeks discussing some of the details of a climate change agreement that most of us hope will be ratified in Paris in 2015.

A great debate is raging around whether or not governments should include climate finance and adaptation commitments, or just mitigation, in the national offers of action they are due to submit early next year. Sorting out this ‘sticking point’ is crucial if a climate agreement is to be ratified in Paris next year. 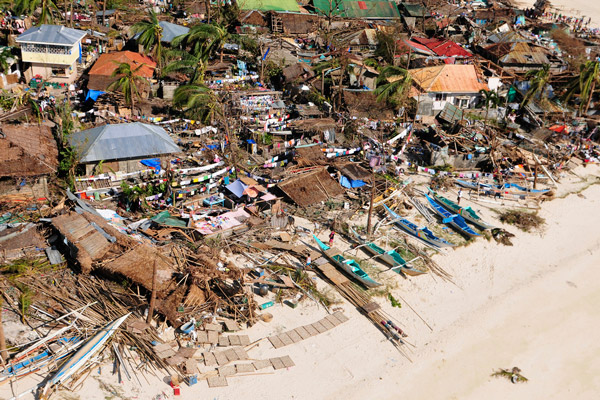 At present, a lot more money is going to mitigation than to adaptation. The poorest and most vulnerable countries are not receiving the money they need in order to adapt to climate change. Once again, those living in poverty are being forgotten.

At COP16, the Green Climate Fund (GCF) was established with the aim of helping developing countries respond to the threat of climate change. This week in Lima, commitments to the fund reached just over US$10 billion which, whilst a ‘landmark achievement’, is still way off the US$100 billion a year target set for 2020.

Whilst I firmly believe the GFC should receive more funding, I am not convinced that money is going to solve the problems faced by those living in poverty.

Whilst funding for adaptation is essential, I believe if we could address the inequities of the current economic system, by creating a new economic paradigm based on fairness, then, not only would we address some of the causes of climate change, we would also reduce peoples’ vulnerability to the threat.

My hope is that at the end of next year, I will be able to tell my students an optimistic story about climate change. A story about the year when humanity ratified a fair and equitable global agreement on climate change that; was not just about politics and economics; had the poorest and most vulnerable at its heart and was about compassion and about a new way of ‘seeing the world’.

Such an agreement, however, will only achieve its aims if, as a species, we learn to live more lightly on this planet – our only home.