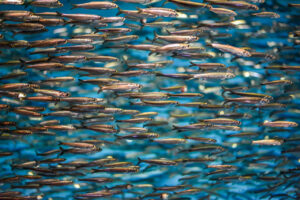 Anchovies – a tiny salty fish, that appears to barely be recognised at all.

There are many contributing factors that allow the Ocean to thrive but what we need to acknowledge is the importance of these nutrient-rich fish. Anchovies play a vital role in the oceans ecosystem as they are a crucial food source for other sea creatures.

Water is the life of our Planet. Without water our green, luscious planet would not exist. It is estimated that the ocean holds about 96.5% of the Earths water. So what can we do to protect our oceans?

Lets begin with understanding the food web: an interconnected chain of what eats what!

Killer whales are the Oceans ultimate apex predator, that feed on big fish like Tuna for example. Tuna are fish-eating fish – they feast on smaller fish like Herring and Anchovies. Anchovies are forage fish, they eat small molecules of food and thrive off of plankton.

You see, the food chain has a domino effect. When the keystone species at the bottom are disturbed it creates an imbalance that can erode the entire food web. Without anchovies the seabirds, marine animals and predatory fish are forced to fight for food which can lead to a collapse in population of the larger pelvic fish.

So why are anchovies being disturbed in the food web?

Anchovies are used for fishmeal to feed farm animals and they are also used in oil capsules for human consumption.

Fish meal is used in animal feeds for its high protein concentration and sources of other minerals. This produces higher yields of milk production in cows and contains an unknown growth factor necessary for maximising chicken development.

While it may seem as if this is a positive affect, fish-consumption advisories issued to protect human health do not extend to fish by-products…Animals that are fed fish-meal can accumulate concentrated levels of mercury and other pollutants can be passed on in the fat components of fish meal, thus leading to inflammation and enforcement of antibiotics. So not only are the anchovies under attack, the cows and chickens are too, which essentially means that if we continue to support fish-meal fed animals then we as Humans are under attack too.

The anchovy population hasn’t been officially counted since the 1990’s and commercial catch limits are outdated. We all love anchovies over pizzas and over pastas, but now they’re over-fished. There is no daily bag limit, no medium size limit and no closed season for fishing anchovies – as stated at SAAMBR. A static quota is meaningless when it disregards how many Anchovies are currently in the sea.

Dr. William Sydeman wrote in a 2021 article, “Fisheries in South Africa are thought to be negatively affecting the endangered African penguin and causing substantial population decline.”

Anchovies are smaller than they once were and are classified as an unsustainable fish as their populations differ depending on a given year’s particular weather.

Changes in the climate

The rising ocean temperatures are also a contributing factor to Anchovies being unsustainable.

The small fish species could actually face extinction as their ability to adapt is hampered. Warm temperatures results in a loss of oxygen in the sea and it makes fast-growing fish species vulnerable to dramatic population plunges. The difference in the Oceans pH levels also cause species to change their distributions and productivity.

It’s frighting when we open up a can of anchovies – excuse the pun! But the truth is, every single species on Earth has an extremely important role: And that includes you too!

“An improvement would be for people to eat more anchovy directly, rather than feeding it to farmed animals,” said Renato Salvatteci, a fisheries biologist at the Christian-Albrecht University of Kiel.

Below are some action steps you can take to help our beloved Anchovy:

Even though I am under no illusion that substitutions for anchovies in animal feed will save the world – I believe it is vitally important to raise awareness around the Earth-destroying factors that are casually being over-looked. The human population, climate change and overfishing are increasing at a rapid rate and its affecting the ability of all other species to thrive.

There is potential to have enough anchovies on Earth – we just need to make a collective conscious decision to respect and protect the Oceans and highlight the importance of its Eco systems.

By raising awareness around a tiny fish with a big impact, together we can make waves of change.

In closing, we as humans are the biggest threat to Anchovies yet we are also the primary solution. We need to change in order to preserve the Anchovies and allow the Oceans eco-systems to thrive.

By Tanita Boswell, Founder of Herbiraw