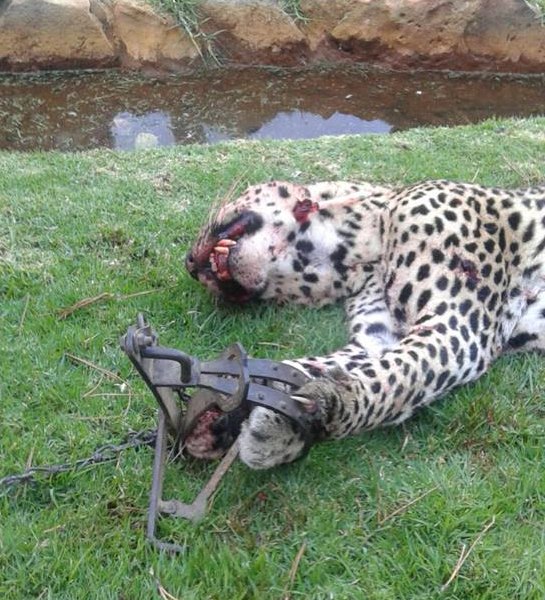 Cape Nature’s Corne Claasen shot and killed this leopard on Saturday that was caught in a gin trap and broke from its anchors. The Police was present and so was a veterinarian that attempted, unsuccessfully, to dart the leopard, says the Landmark Leopard and Predator Project of SA.

The incident occurred on the Jakkalsvlei Farms of Mr Marais Rossouw in the Koo Valley near Montagu. The farmer alleges that he carried no knowledge of the use of the gin trap on his farm and that it was the doing of his labourer that is now subject to a police investigation.

CapeNature knows that we are on permanent standby to attend to these incidents and have the tools and experience to help rescue leopards, as we have done in 53 cases! We even have permits to do so from them and to utilize these episodes to research leopards.

CapeNature has wilfully refused to call on our assistance as they are still smarting from being exposed in authorising the Bredell Cull – a cull that happened under political duress to appease the farmer vote that authorized the destruction of more than a million meso-predators (jackal and caracal) in the province. This cull is ongoing. This lack of use of the capacity we offer has been detrimental to several leopard rescues and resulted in the demise of some of these leopards, and certainly opportunities to learn more about them.

The Bredell Cull has subsequently legitimized the use of gin traps, even renaming them soft traps, provided the users have a permit from CapeNature to use them. In this incidence there was no permit. Gin traps are freely available for purchase in almost every rural town, in part due to CapeNature’s tacit consent to their use under the Bredell Cull.

CapeNature has killed many leopards in the past. CapeNature is recorded as the most prolific killers of leopards in the Western Cape, usually under the guise as management of “problem leopards”. The species is under genetic threat as they have evolved into small meta-populations with little to no connectivity, and resultant genetic bottlenecking.

Saving leopards like this one is critical, and the best chance to do so is to have the competent people doing the rescues and having the tools to do so present, inclusive of an ability to GPS track the leopards post release. We have repeatedly offered this service to CapeNature but they feel they do not need us. Again this leopard’s death will be justified by them as protecting human life when it broke out of its anchors while the vet could not put the animal down after several attempts.

This is a failed rescue, and we allege that CapeNature was negligent in not providing the best possible chance to rescue this cat. Again the leopard looses. Still gin traps are legal hunting methods (once they issue permits) as the CapeNature calls them soft traps. So nothing has changed and leopards will in time disappear from our landscape.

It is our prediction, like in the past, a limp attempt will be employed to bring this kind of criminal activity that results in the death of a protected species via a gin trap to book, and nothing will happen to deter this kind of action. WHY ARE GIN TRAPS NOT OUTLAWED?

Why are gin traps not outlawed?

Only 2 years ago our research leopard in this same area was poisoned in the Koo valley and nothing was done by CapeNature to investigate and act against a strong suspect.

So another leopard is gone. Gin traps are called soft traps in the Western Cape and are legal under permits. The Bredell Cull is ongoing. CapeNature officials remain unaccountable and arrogantly continue on with their insular mentality. Leopards are being killed with gin traps and accountability is absent.