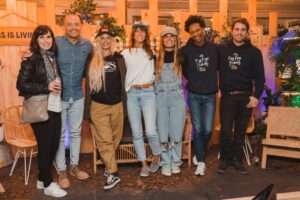 The international premier of season two of the hit, short format documentary series, Free Range Humans, took place in Cape Town yesterday, attended by five of the six international eco-activist cast members who have heeded the call to help save the planet, its diverse ecosystems and marine life.

Also in the cast is South Africa’s Loyiso Dunga who is fighting to help save the ‘Great African Kelp Forest’, the only forest of giant bamboo kelp on the planet, which stretches from the Cape north for more than 1000km into Namibia.

With South Africa setting the stage for the global roll out of Free Range Humans – Nature Is Calling, urban hotpots in Cape Town and Johannesburg have also been transformed with natural settings, intended as a wake-up call to humanity to reconnect with nature to protect the planet as well as reap the health benefits.

Today, city dwellers (more than 50% of the world’s population *) spend 95% of their lives indoors with a profound disconnect from nature resulting in numerous physical and mental health deficiencies.

Those inspired by the stories of the show’s ‘Free Range Humans’ are also encouraged to apply for Corona’s Free Range Fund. The Fund will award six US$10,000 grants globally to serve as seed money for recipients to take the leap and answer their unique call from nature.

All episodes of Free Range Humans – Nature Is Calling from Corona Studios are now streaming on Corona’s YouTube channel.