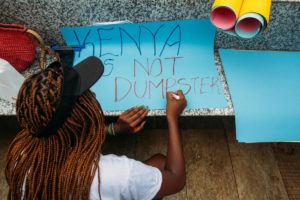 As Kenya marks the fourth anniversary of the ambitious plastics ban much has been achieved including limiting the pollution by carrier bags and the president’s directive in protected areas but, still more needs to be done.

Greenpeace Africa applauds the gains that the country has made and urges the government to urgently ‘’pronounce its support for the global plastic treaty’’. Plastic pollution is among one of the biggest threats facing humanity today and Kenya is uniquely placed to lead the world into a plastic-free future by galvanising the rest of Africa to support a global plastic treaty.

“The Kenyan government has shown its commitments towards a plastic free future in many ways including banning the manufacture and use of single-use plastic bags in its territories and a ban on the use of all single-use plastics in protected areas. A commitment to a global framework that limits production and use of plastic materials including exportation will show that Kenya can be a world leader for a sustainable future free of plastic pollution especially the unnecessary single-use plastic materials,” said Greenpeace campaigner Amos Wemanya.

“Plastic pollution remains a serious problem in Kenya.’’ adds Amos Wemanya ‘’Plastics are devastating communities’ health, environment and the ecosystem that millions depend on for livelihood. However, despite the ban on single-use plastic carrier bags coming into effect four years ago, plastic pollution remains a big transboundary and global challenge for Kenya and more needs to be done to make Kenya plastic-free.” 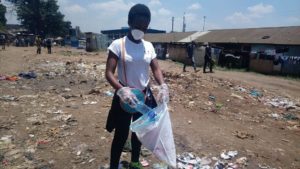 Since the ban on single use plastic bags in Kenya came into effect, a lot of improvement has been realised in terms of safeguarding the environment and livelihoods from the challenges posed by plastic pollution. We no longer have plastic bags flying all over in our neighbourhoods nor in our drainage systems. However, we still have other single use plastic materials such as bottles littering our environment and causing problems.

Another gain that has been achieved with the plastics ban was the positive influence the ban had on other African countries. Many other African countries have followed the Kenyan examples by enacting regulations that limit the production and use of single use plastic bags in their regions. Except for a few countries such as South Africa, many African countries are showing the way to a future free of plastic challenges. This needs to be improved as the plastic crisis continues to be a global challenge. This is demonstrated by the amount of plastics entering our oceans and environments every day. It is worrying that these plastics are causing problems to our marine as well as animal and plant species on land.

For communities, the effects of plastic waste are equally harmful, blocking riverways and provoking flooding among other huge environmental discomforts. The livelihoods and health of many communities are disrupted and affected negatively by plastic pollution. Kenya is at the forefront of the war on plastics. 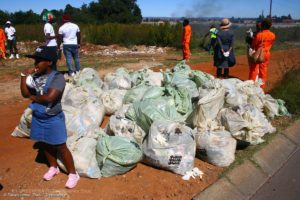 Threats to the plastics ban exist as Amos Wemanya highlights “recently, some of the gains that the Kenya single-use carrier bags ban had achieved came under threat as the proposal by the American Chemistry Council in the ongoing US-Kenya Free Trade Agreement sought to have plastics imported into Kenya. From this experience, it is evident that both national, regional and global actions are needed to effectively eliminate unnecessary plastics and protect our future from the challenges presented by plastic pollution.”

An opportunity exists next week for Kenya from the 1st to the 2nd of September 2021, in the Ministerial conference on marine litter and plastic pollution. This meeting is a consultative meeting in the lead up to the 5th UN Environment Assembly that seeks to establish a global framework to tackle the challenges of plastic pollution. By supporting a global plastic treaty Kenya will be positioning itself to tackle challenges such as the influx of plastics from other regions through actions like the US-Kenya Free Trade Agreement.

Wemanya concluded that “as Kenya marks its fourth single-use plastic carrier bags ban, it needs to urgently pronounce its support for the global plastic treaty, especially in the meeting scheduled for next week. Global solidarity is needed to support efforts by countries like Kenya and many other African countries to sustainably safeguard our future from the plastic crisis.”